A senior Delhi Police official said that the police team had raided Navneet's farm house and Sainik Farm's house in Chhatarpur, South Delhi, to investigate the case, but the accused was not found there. Police has collected some evidence from both the places. 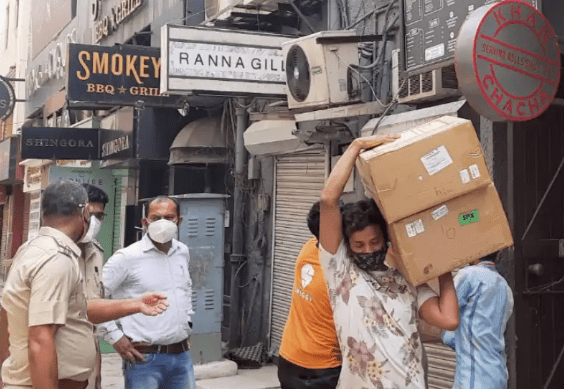 A lookout notice has been issued on Monday against the main accused Navneet Kalra in the case of recovery 524 oxygen concentrators from three restaurants, including Khan Chacha, located in Delhi’s Khan Market.

Kalra, the main accused in the recovery of 524 oxygen concentrators from the hotels, is still absconding. Several teams of the crime branch have raided more than 20 places in Delhi, UP and Uttarakhand in search of the accused, but no clue has been found.

It is said by the Police official that Kalra mobile phone went off at his farm house in Chhatarpur shortly after raiding Khan Chacha Restaurant on Friday.  During the investigation, the police have learned that Navneet, along with his entire family, has left Delhi with two luxury cars and is suspected to be hiding in Uttarakhand.

A senior Delhi Police official said that the police team had raided Navneet’s farm house and Sainik Farm’s house in Chhatarpur, South Delhi, to investigate the case, but the accused was not found there.  Police has collected some evidence from both the places.

The police has come to know that the accused had sought a consultant from China through a private company. Nearly 150 of these contractors had sold  by the employees of Navneet Kalra.  Apart from this, the accused had also taken advance rupees in the name of the oxygen concentrators from many people.

During the interrogation, his employees have told that his boss started the business of the Oxygen concentrator when the hotel was closed due to Covid.  Kalra hired the very special staff of the restaurant to sell the concentrator.  It was revealed when the police raided the restaurant bar of Lodi Colony on Wednesday.

From there, the police recovered 419 concentrators and arrested four people.  After questioning them, on Friday, raided Khan Chacha and Town Hall, the famous restaurant in Khan Market, recovered 105 concentrator machines and more.