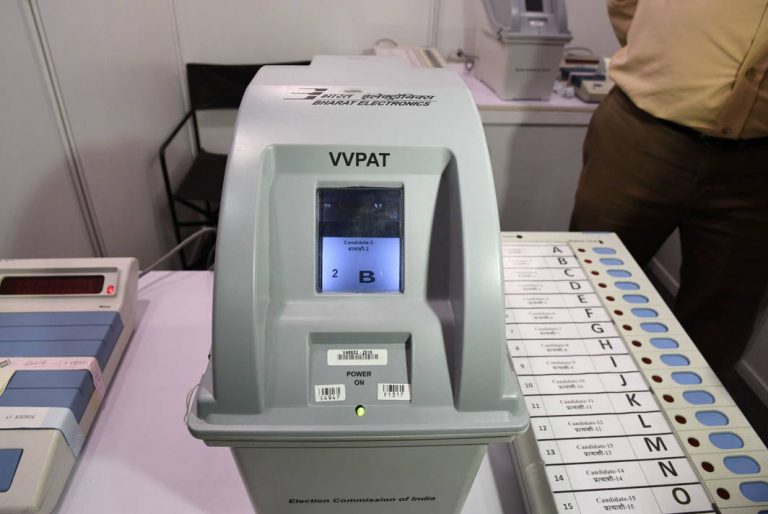 With a view to removing the misgivings about the malfunctioning and tampering of Electronic Voting Machines and instilling confidence among people, a group of retired Foreign Service officers and civil servants have put forward proposals which they claim will bring these controversies to an end.

In an open letter (read below)  they have sought to acquaint the general public and political parties with the nuances of the VVPAT-based audit of EVMs and that the Election Commission of India will soon come out with a solution (ours, or an equally sound one) that answers the issues that are being raised. Pointing out the anamolies in the existing system, they said there is an imperative need for an additional verifiable physical record of every vote cast, in the form of ‘voter verified paper audit trail’ (VVPAT). It allows for a partial or total recount independent of the EVM’s electronic count and helps detect counting mistakes and frauds that would otherwise go undetected. Their letter said:

“We are a group of former civil servants of the All India and Central Services who have worked for decades with the Central and State Governments during our careers. We wish to make it clear that, as a group, we have no affiliation with any political party but believe in impartiality, neutrality and commitment to the Constitution of India. With our collective experience of conducting and supervising elections from the local body to the parliamentary level, we wish to suggest what needs to be done to make the actual process of voting and counting as free as possible from suspicions of Electronic Voting Machine (EVM) malfunction and manipulation.

It is common knowledge that EVMs are ‘black boxes’ in which it is impossible for voters to verify whether their votes have been recorded and counted correctly, and in which miscounts due to EVM malfunction or manipulation are undetectable and unchallengeable. Hence, there is an imperative need for an additional verifiable physical record of every vote cast, in the form of ‘voter verified paper audit trail’ (VVPAT). It allows for a partial or total recount independent of the EVM’s electronic count and helps detect counting mistakes and frauds that would otherwise go undetected. In 2013, the Supreme Court passed an order mandating the use of EVMs with VVPAT units, and the Election Commission of India (ECI) has been deploying VVPAT units in Assembly Elections from 2017 onwards.

If VVPAT is to have any real security or accuracy value, it should form the basis of a proper audit plan. This entails tallying the electronic count as per the EVMs with the manual count as per the VVPAT slips for a ‘statistically significant’ sample size of EVMs chosen at random from a suitably defined ‘population’ of EVMs. Equally important is a clear ‘decision rule’ about what should be done in the event of a ‘defective EVM’ turning up in the sample. A ‘defective EVM’ is one in which the EVM count does not tally with the VVPAT count due to either EVM malfunction or manipulation. But the audit plan that the ECI has followed in recent elections suffers from the following serious shortcomings:

First, the ECI has prescribed a statistically incorrect sample size of just “one polling station (i.e. 1 EVM) per Assembly Constituency” uniformly for all Assembly Constituencies and all States. It has not taken into account the fact that the number of EVMs in an Assembly Constituency varies widely across States from about 20 to about 300, and in a State from 589 (for Sikkim) to 23,672 (for Chhattisgarh which is the median State) to nearly 1,50,000 (for Uttar Pradesh). We are of the view that a uniform sample size for widely varying finite population sizes does not conform to fundamental principles of statistical sampling theory.

Third, the ECI has been vague about its ‘decision rule’ in the event of one or more defective EVMs turning up in the chosen sample.

Fourth, the ECI has not been transparent about the results of its VVPAT-based audit of EVMs for the various Assembly Elections held in 2017 and 2018 and the details are not available on its website.

In short, the ECI’s audit plan is unable to detect outcome-altering miscounts due to EVM malfunction or manipulation, which defeats the very purpose of introducing VVPATs. Spending hundreds of crores of rupees on procurement of VVPAT units makes little sense if their utilisation for audit purposes is reduced to an exercise in tokenism.

Our group has been engaged over the past nine months in discussions with the ECI on issues relating to the proper VVPAT-based audit of EVMs. In our letter dated 10th December 2018 to the Chief Election Commissioner, we had sought clarifications from the ECI about certain pointed queries regarding the sample size and the decision rules. We had requested that in the interest of ensuring public confidence and the cooperation of political parties, it would be in the fitness of things if the clear reasons for adoption of a particular sample size and the decision rule for counting of VVPAT paper ballots are placed in the public domain, including on the ECI website. But there has been no action on this front.

The lack of transparency in VVPAT-based audit of EVMs has fuelled various conspiracy theories about ‘mass rigging of EVMs’. There have been unacceptable demands for reversion to paper ballots. But the real issue today is not about “EVMs versus Paper Ballots”; rather it is about “EVMs with perfunctory VVPAT audit versus EVMs with proper VVPAT audit”.

Any electronic equipment is inherently subject to random malfunction. By its own admission, the ECI keeps about 20-25% of EVMs and VVPAT units in reserve to replace those which malfunction on the polling day within a few hours of the commencement of the poll. There is every likelihood that a certain percentage of EVMs may again malfunction randomly during the long interval of 15-30 days between the date of polling and the date of counting. Perhaps this explains the occasionally noticed random discrepancies between the polling station-wise figures of voter turnout and the votes as counted in EVMs. The argument that some Presiding Officers ‘forgot’ to initialise the EVM count to zero at the end of the mock poll demonstration before the regular polling commences does not explain why there are positive as well as negative discrepancies. 3

As regards EVM manipulation, we wish to state that though it is highly improbable, this low probability can increase significantly with insider collusion. While the ECI has put in place a security protocol and various administrative safeguards that look impressive on paper, vulnerabilities do exist. Large-scale rigging of EVMs may not be possible or necessary because potential attackers need to target only select EVMs to tip the balance in a few marginal, closely fought constituencies. What is worrisome is that without a credible VVPAT-based audit of EVMs, the fraud may be undetectable and may be carried on with impunity.

We, therefore, appeal to the ECI to go in for a statistically correct sample size that can detect at least one defective EVM with 99.9 per cent reliability, in a suitably defined population, by adopting the hypergeometric probability distribution model. In something as important as ensuring the integrity of the election process – a process which in any case takes about 2-3 months from the date of announcement to the date of counting – a delay of a few hours or even a day in the manual counting of VVPAT slips of a larger (statistically correct) sample size of EVMs should not matter at all.

We also appeal to the ECI to adopt the following ‘decision rules’. Full manual counting of VVPAT slips should be done (1) for all the remaining EVMs of the defined population if the sample throws up one or more defective EVMs, (2) for closely contested constituencies where the margin of victory is below 2 per cent of the votes cast or 1000 votes, whichever is less, even if no defective EVM turns up in the sample, and (3) for those polling stations where the discrepancy between the votes polled in EVMs and votes as counted in EVMs is more than 2 per cent.

We request the ECI to implement these suggestions in the Lok Sabha elections due in April-May 2019. Though the counting process may take a little longer, the confidence of the voters and political parties in the electoral process will be reinforced. The ECI has a long and honourable record of holding free and fair elections. It is in the spirit of supporting it in maintaining these high standards that we write this open letter.