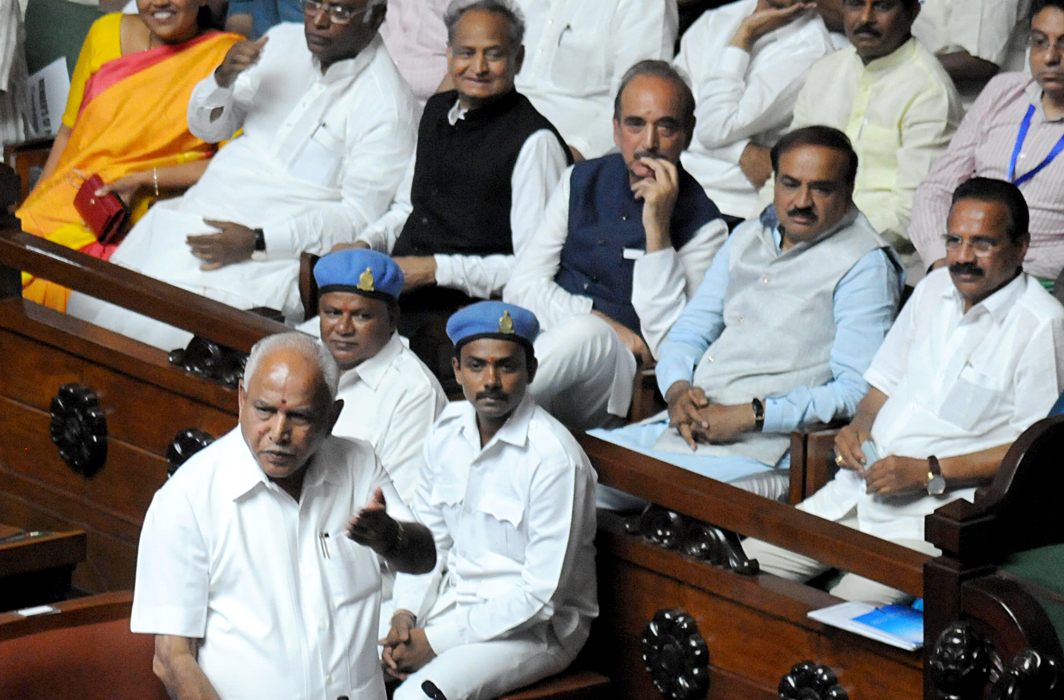 After days of vociferous claims that the BJP would prove its majority on the floor of the Karnataka Vidhan Soudha, chief minister BS Yeddyurappa made a record of sorts, on Saturday (May 19), by stepping down from office within two days of being sworn in.

The Lingayat strongman, who was took oath as chief minister on Friday morning, was forced to resign from office after he failed to push his party’s legislative strength to a simple majority ahead of the floor test that he was to face at 4pm on Saturday as per directives from the Supreme Court.

The embarrassment that was in store for Yeddyurappa, the man who helped BJP form its first government in a southern state back in 2008, had been imminent since Saturday morning with the Congress-JD (S) combine asserting that despite furious attempts by the BJP top brass in New Delhi and Bangalore their legislators had fended off the lure of money and ministerial berths.

By Saturday afternoon, as the two “missing” Congress MLAs – Anand Singh and Pratap Gouda- who were suspected to have been poached by the BJP for the floor test joined their party colleagues in the Vidhan Soudha for lunch, it became crystal clear that the BJP’s efforts to win over MLAs from the Opposition in its bid to stay on in power had failed miserably.

With egg on his face, a visibly humiliated Yeddyurappa tried hard to strike an emotional chord with the state’s electorate as he rose to address the house ahead of the floor test. Profusely thanking Prime Minister Narendra Modi and BJP president Amit Shah for showing faith in him by naming him the party’s chief minister, Yeddyurappa spoke for nearly 30 minutes about the “dreams and vision he had for Karnataka”.

As he began lamenting the lack of a majority for his party in the assembly polls that concluded on May 12 (the results were announced on May 15 with the BJP emerging as the single largest party with 104 seats in the 224 member assembly but short of reaching the majority mark of 113 seats), Yeddyurappa said that he had toured the state and seen the hardships that the people were facing under the Congress-rule of his predecessor Siddaramaiah. He said that he had sensed that the people wanted the BJP to come to power but admitted that since his party couldn’t get the requisite number of seats to form the government he had to now step down.

The Congress and JD (S), with 117 MLAs between them and thus well past the simple majority mark in the Vidhan Soudha, is now expected to stake claim to form the next government with JD (S) leader HD Kumaraswamy as the chief minister.