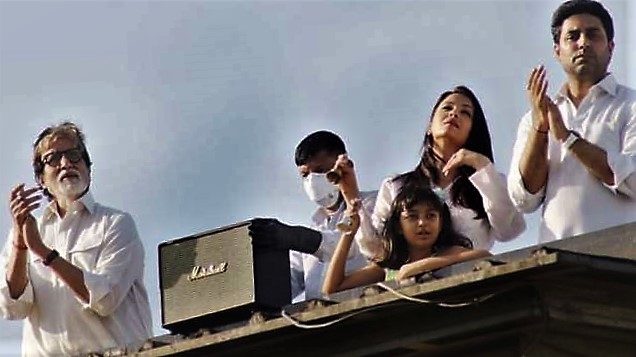 This could have an alternate title of ‘The Big B and the Big Bang’. Many of us were treated on social media to visuals of the Bachchan clan clapping enthusiastically from their balcony in response to the call given by the Prime Minister. However, there was something wrong with the picture. Along with the famous faces were some unfamiliar ones, quite a few of them in fact, crowding the equally famous balcony. They were presumably domestic help or employees but in a time when social distancing has become the only logical way to flatten a curve which is climbing alarmingly every day, it sent the wrong message. Indeed, standing on my much more modest balcony, and watching the coverage on television channels some minutes later, it was obvious that a majority of my countrymen were treating this issue, the most serious crisis since India was forced to hock the family silver, or gold actually, as a tamasha. Everywhere, including on the street below my South Delhi balcony, residents had taken to the streets in large numbers and in close proximity, dancing like they were in a Bollywood movie, many doing the bhangra, and clanging and clapping to create an earth-like rival to the Big Bang. The sound was deafening and the dancing bordered on the obscene, reducing the seriousness of the issue to a mockery. Balconies were crowded by people who had literally come together to fight the evil eye. Instead of celebrating the courageous medical personnel, as was the original intention, most participants ended up doing the opposite, especially those who knew a TV camera was in the vicinity. Many politicians from the ruling party were shown surrounded by the usual hangers-on. Many got so carried away with the occasion that the clanging and disco dancing carried on for a good half an hour, instead of the designated five minutes. Social distancing is still an alien word in a country of 1.3 billion people. During the Vietnam War, the daily press briefing became known as the Five O’clock Follies, in reference to the misinformation being dished out. This was India’s Five o’clock folly, or frolic if you will, since that seemed to be the overlying message. There were many who treated the issue with the solemnity and seriousness it deserved but their efforts were diluted by those whose lives are dictated by selfies and the urge to display their misplaced patriotism on their sleeves, or on their household utensils. In the end, it was an opportunity lost, and all because educated Indians failed to honour those who are risking their lives for all of us. Even the Prime Minister was constrained to state that many people were not taking the restrictions seriously. One scene I witnessed personally resembled members of a baraat competing with each other to be a dancing queen, or king. The desire to be an exhibitionist seems very Indian, genetically passed on to every generation. No wonder India is number one in terms of usage of Tik Tok and similar video services that allow self indulgence and demonstrations of misplaced talents. If we have one overriding talent, it is the ability to ruin an event by our love of self aggrandisement, even during an occasion that calls for seriousness and solemnity. We are entering a Grave New World (with apologies to Aldous Huxley), but not many of our countrymen seem to have got the message.