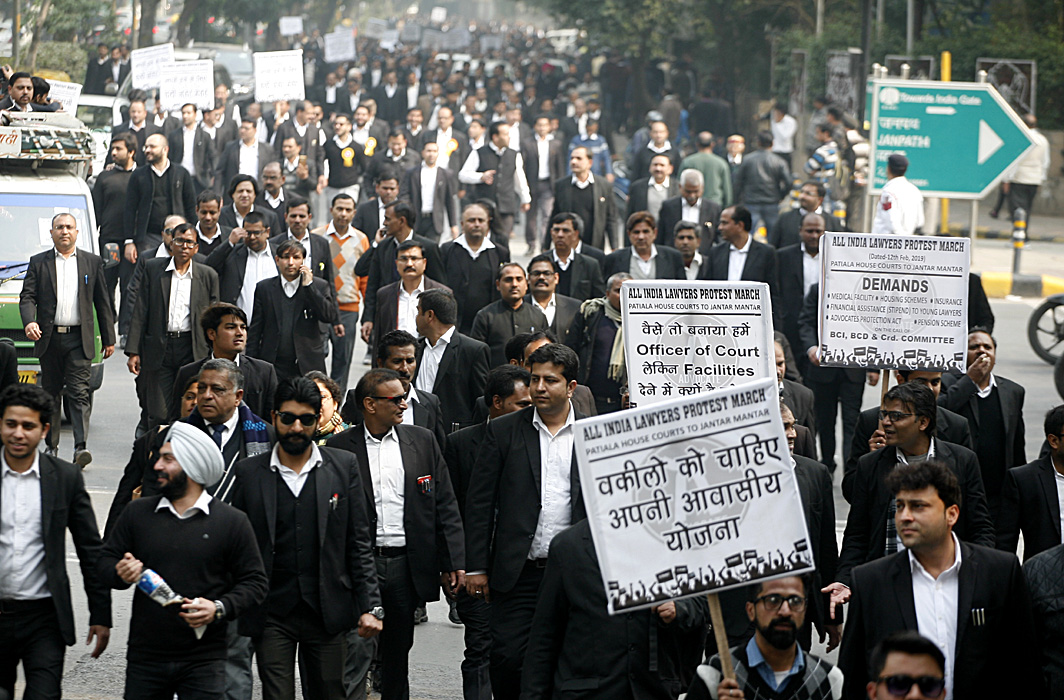 Just over a fortnight after lawyers took to the streets to raise various demands, the government is learnt to have initiated to moves to concede some of them.

On February 12, the Bar Council of India along with state-level Bar Councils held a demonstration in the capital seeking budgetary allocation for welfare of advocates — insurance scheme, chamber facilities, and accommodation.  According to a source, the Law Ministry in a note has initiated discussions on a proposal of setting up of a committee to examine the issues relating to framing of a comprehensive insurance scheme for lawyers. “The committee comprises Dr Alok Srivastava, Secretary, Department of Legal Affair; Secretary, Department of Financial Services, and Joint Secretary, Legal Affairs. And, the government would also want Bar Council of India and state-level Bar Councils be on board regarding the discussion on framing of the insurance policy,” said the source. The Law Ministry will get in touch with lawyers’ association to develop a consensus on the insurance scheme.

Earlier this month, Law Minister, Ravi Shankar Prasad, gave an assurance in Rajya Sabha during Zero Hour that government has an open mind on considering the demand of lawyers. Rajya Sabha Chairman M Venkaiah Nadu rebutted that along with an open mind the demands should be considered with a positive mind. Law Minister assured that demands would be looked at positively.

Speaking to India Legal, Manan Mishra, Chairman, Bar Council of India (BCI) said, “We haven’t been contacted yet regarding a committee to discuss insurance cover for lawyers. After the lawyers’ protest, BCI delegation met the Law Minister. He floated the idea of setting up of a committee to look into our demands. We refused it. These committees are just farce. We want government to allocate a budget and involve Bar Council of India and state-level Bar Councils in the management of the funds for the welfare of lawyers. We want long-term sustainable solution.”

The BCI Chairman said that insurance cover is just a part of the larger issue. “Judicial infrastructure should be prioritized for lawyers. Government has already sanctioned infrastructure for judicial officers; a similar arrangement should be made for lawyers too. The government wants to develop e-courts, but where is e-library for lawyers. The question on allocation of chambers facilities is still lingering,” added BCI Chairman.

During a meeting with the lawyers association on February 12, the Law Minister had assured to set up a committee to look into the overall welfare issues, but did not agree on allocating a corpus to meet lawyers’ demands.