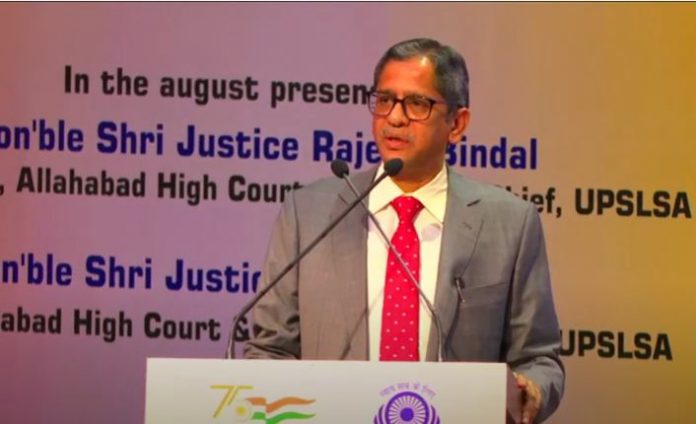 Chief Justice of India Justice N.V. Ramana has been in the limelight not just for his judgments as the head of the Supreme Court but also for his speeches outside the Court. CJI Ramana has been candid on different issues whenever he gets time to interact with the public or with students. Here is a compilation of his speeches in 2021.

‘A healthy democracy can thrive only with a fearless press’

A healthy democracy can thrive and survive only with a fearless and independent press said Chief Justice of India Justice N.V. Ramana at an event organized by the Mumbai Press Club on December 29.

He said: “Speaking truth to power and holding up a mirror to society, is an immense responsibility that is extremely difficult to fulfil. There is enormous pressure and stress upon you.”

Commenting on the worrying trend of ratings in contemporary reporting, CJI Ramana said: “In the race for ratings, the important journalistic tenet of verification before publishing is not being followed.”

‘Ethos of democratic India based on people’s commitment to Constitution’

CJI Ramana on December 19 said the ethos of the democratic republic of India is based on the people’s commitment to the welfarist Indian Constitution.

Speaking at 18th convocation of the NALSAR University Hyderabad, the CJI said this commitment must be nurtured at an early age by creating social consciousness and inculcating a culture of lawfulness. The educational institutions of our country, such as NALSAR, play a pivotal role in fostering the spirit of the Constitution, he said.

In his inaugural address at India’s first International Arbitration and Mediation Centre (IAMC) in Hyderabad in the presence of Telangana Chief Minister K. Chandrasekhar Rao, Justice Ramana said: “Instead of sending litigants to some faraway locations, the arbitration centre will ensure cost-effective and efficient resolution of disputes of the local litigants and I am sure that the centre will lead the way for arbitration and mediation in the country and will become the primary centre not only in India but across Asia and the world.”

Justice Ramana on December 26 said the courts have played an important role in ensuring that the rights enrished in the Constitution are not a dead letter. CJI Ramana said this while delivering his lecture on the 5th Late Shri Lavu Venkateswarlu Endowment Lecture at Siddhartha Law College, Vijayawada.

CJI Ramana said even after 75 years of independence and 72 years of abiding by democracy, India is one of the youngest, but also one of the most steadfast democratic republics. He said that distancing independent India from its colonial past was not an easy feat and after Independence, our country’s biggest challenge was modernization and shifting gears from primarily an agricultural economy to an industrial one.

CJI Ramana on December 15 said the media canvas had vastly changed since the days of newspapers breaking big stories and noted that it was because investigative journalism had unfortunately vanished from the scene.

Speaking at the launch of the book Blood Sanders: The Great Forest Heist authored by journalist Sudhakar Reddy Udumula, CJI Raman said he leaves it to the discretion of the attendees to arrive at their own conclusions on the trajectory of journalism over the years.

‘Judicial interventions only to nudge Executive’

He said it’s a reality that even after decades post-Independence, a large section of people in the country had to suffer exclusion. Crores of those people who didn’t even have a toilet at their house, who were living in the dark in the absence of electricity, who were without water.

‘Work towards establishing a progressive world’

Justice N.V. Ramana on November 21 said students should make their efforts to establish a progressive world being global citizens.

Speaking at the 40th convocation of Sri Sathya Sai Institute of Higher Learning, CJI Ramana told the students that they should not be trapped in individual needs or wants, and stay circumscribed by family, neighbourhood, village, community, and so on. “If you start practicing this, you will soon be living in a better world free of conflicts and violence,” the CJI said.

‘Women should have 50 pc reservation in all levels of judiciary, law colleges’

Justice N.V. Ramana on September 26 said judges don’t have any problem with the physical hearing of cases and hoped to resume after Dussehra if the country would not be hit by another Covid wave.

While speaking at the felicitation ceremony to honour the Chief Justice and other Supreme Court judges organized by Lady Advocates of Supreme Court, CJI Ramana said that the judges are ready to reopen courts even in the pandemic time but the majority of the advocates and several senior counsels do not prefer physical hearing.

‘Legislature should revisit laws, reform them to suit people’s needs’

CJI Ramana on September 24 said the legislature should revisit the laws and reform them to suit the needs of time and people. Inaugurating the Aain Seva Bhawan, the new building of Odisha State Legal Service Authority (OSLSA) at Cuttack and dedicating it to the people of Odisha, the CJI congratulated Chief Justice of Orissa High Court, S. Muralidhar, who he stated was a dear friend and referred to him as ‘Murali’. He praised Justice Muralidhar for his hard work, leadership qualities and specially for his commitment and dedication to serve the people of Orissa.

‘Justice system needs to be localised to suit complexities in India’

Justice Ramana has said people in rural areas of the country feel left out of the justice system since the proceedings are in English because of its colonial history. Further, the CJI said the justice system needs to be Indianised in that respect.

Speaking at an event organised by the Karnataka State Bar Council to pay tributes to late Justice Mohan M Shantanagoudar, who passed away on April 24 this year, the CJI said, “Very often our justice delivery poses multiple barriers for the common people. The working and the style of courts do not sit well with the complexities of India.”

Justice N.V. Ramana has said that there is need to come up with plans and schemes to reintegrate women prisoners back into society.

CJI Ramana made this observation during the 32nd Central Authority Meeting of the National Legal Services Authority (NALSA) on September 15. The CJI is the Patron-in-Chief of NALSA.