154,225FansLike
654,155FollowersFollow
0SubscribersSubscribe
Home Top News of the Day news Hafiz Saeed threatens to sue minister for Rs 100 mn for calling him a “darling” of the US 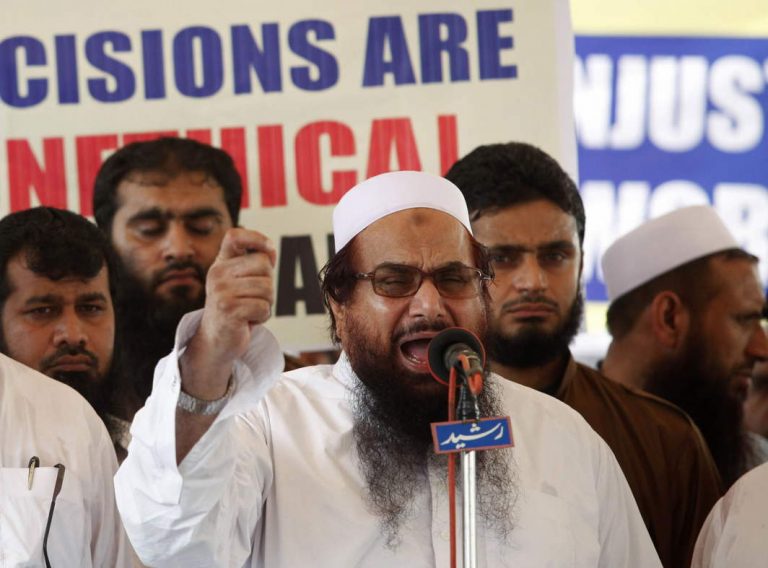 Above: Hafiz Saeed, head of the Jamaat-ud-Dawa organisation and founder of Lashkar-e-Taiba (LET), gestures as he addresses supporters during a protest in Lahore (file picture). Photo: UNI

The judicial system in Pakistan is either a supremely well-developed and upright institution standing tall within a failing state and offering completely unbiased access to judgment to all, or an institution where oversight is at a premium and almost anything goes. How else can one explain the known and internationally acknowledged terror mastermind Hafiz Mohammad Saeed having the temerity to threaten a damage suit against a minister who has accepted in public, for the first time, that Saeed is a terror mastermind. And how would a court of law admit a defamation petition by an internationally known terrorist?

This is a big test for the country’s judicial system which gained praise recently for disqualifying its Prime Minister Nawaz Sharif in a disproportionate assets case.

Saeed is not just the co-founder of terror outfit Lashkar-e-Taiba, as well as the chief of another terror-support group Jama’at-ud-Da’wah – both operating out of the safe haven of Pakistan – with UN sanctions placed against them as terrorist organisations, he is also brazenly open about his dealings and the Pakistani authority doesn’t seem to have the guts to touch him.

Jama’at-ud-Da’wah is just a front for the Lashkar-e-Taiba (LeT) terror group and LeT leaders and Saeed are wanted in India for carrying out the deadly 2008 Mumbai attacks.

Saeed has threatened to file a Rs 100-million defamation suit against his country’s foreign minister Khawaja Asif, for calling him the “darling of the United States”. The notice sent to the minister says: “It is shocking to know that the foreign minister of my country is accusing Hafiz Mohammad Saeed of taking wine. Apart from civil remedy, my client has a right to file a criminal complaint against you under Section 500 of the PPC,” according to media reports.

Asif had made his comment at the Asia Society forum in New York. For the first time Pakistan had (as per the minister’s speech) accepted that Saeed, the Haqqanis and the Lashkar-e-Taiba (LeT) are “liabilities”. It also accepted that it does not have the required “assets” to get rid of them. Which means the administration is powerless in front of the terror groups.

The minister had also reacted to the US pressure to tackle these terror groups, operating brazenly from Pakistani soil, by saying that while the US now wants them liquidated, it was the US which once treated them as “darlings”.

That got Saeed’s goat. The terrorist leader’s counsel AK Dogar sent the notice to the foreign minister. The notice, an almost laughable document, states: “Saeed is respected as a deeply religious and devout Muslim. Saeed has never been near the White House, not to speak of wined and dined.

“He is a patriotic Islam-loving Muslim following the dictates of the Prophet. This is a defamatory statement punishable under Section 500 of the Pakistan Penal Code (PPC) to five years imprisonment and with a fine,” the notice said.

“The imputation of wining is a false statement which has injured the reputation of my client and lowered him in the estimation of others. This is slander and actionable libel. I am constrained to issue this 14 days’ notice of the intention of my client to bring an action against you. My client intends to file a suit for damages to the tune of Rs 100 million for injuring his reputation not only in Pakistan but all over the world.

“Apart from civil remedy, my client has a right to file a criminal complaint against you under Section 500 of the PPC. It goes without saying that you will be responsible for the entire cost of litigation,” the counsel’s notice said.