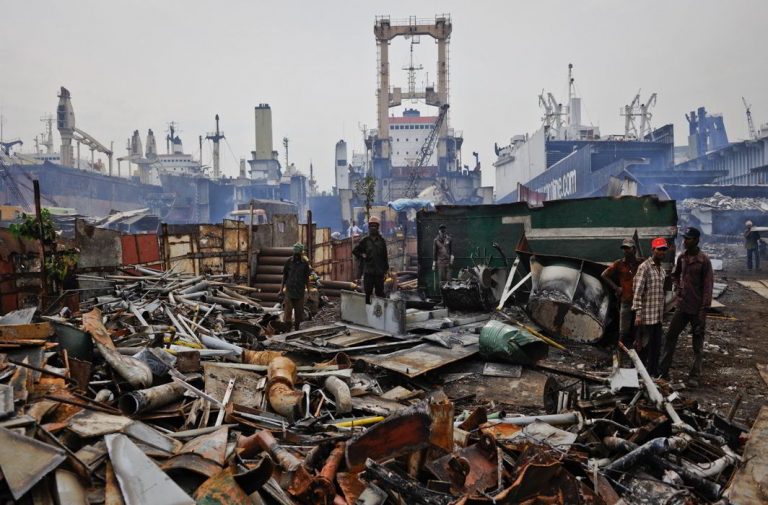 Above: Toxic wastes strewn in a ship-breaking yard. Photo: YouTube

The Supreme Court bench of Justices Ranjan Gogoi and Navin Sinha is hearing a petition by scholar and activist Vandana Shiva, director of Research Foundation for Science Technology and Natural Resource Policy, asking the court to direct the Union government to ban imports of all hazardous/toxic wastes.

Her plea is also for an amendment of rules in conformity with the BASEL Convention and Article 21, 47 and 48A of the Constitution as interpreted by the top court.

She also wants the court to direct the government to declare that workers cannot be allowed to handle such waste without adequate protection and that there should be provision of sound environment management in disposal of hazardous/toxic wastes.

She claims that the “Hazardous Wastes (Management & Handling) Rules, 1989 are violative of Fundamental Rights and, therefore, unconstitutional.”

The basic grievance of the petitioner is that toxic waste is imported from industrialized countries into India, despite such waste being hazardous to the environment and life of the people of this country. She sought to challenge the decision of the Ministry of Environment and Forests in permitting such import into India under the cover of recycling, which, according to the Petitioner, made India a dumping ground for toxic waste.

The petitioner has alleged that these decisions were contrary to the provisions of Articles 14 and 21 of the Constitution and also Article 47, which enjoins a duty on the State to raise the standards of living and to improve public health. In the writ petition it was also contended that Article 48A provides that the State shall endeavour to protect and improve the environment and to safeguard the forests and wildlife of the country.

The case has been revived after 13 years because of certain SLPs filed.

On Wednesday (October 25) it was brought to the notice of the court that in 2010 the then Solicitor General had made a statement before the court, saying that about 10 metric tons of material were tested and an SLP had been disposed off in 2012. The counsel for the Union of India stated that the environment ministry had filed its affidavit on March 2017 wherein it is stated that rules had been framed in 2016 – the Hazardous and Other Wastes (Management and Trans-boundary Movement) Rules, 2016 notified by the Union environment ministry, to replace its older version made in 2008 – how to deal with hazardous matters.

The court asked where is additional Solicitor general P S Narsimha, appearing in this case. The counsel said he is in another court.