154,225FansLike
654,155FollowersFollow
0SubscribersSubscribe
Home Top News of the Day news Ill-treatment of Jadhav’s family in Pak: Swaraj says India will take this to the ICJ 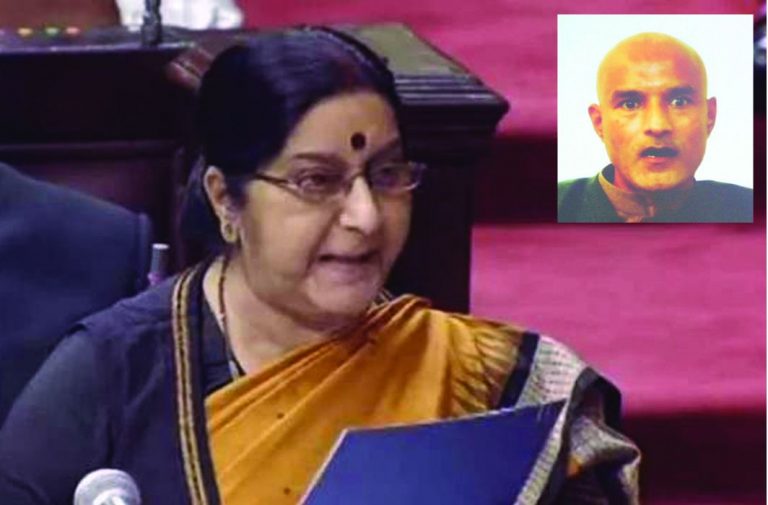 All members of both houses in rare agreement, MPs chant “Pakistan murdabad”

The treatment meted out to Kulbhushan Jadav’s wife and mother when they had gone to meet the Indian in Pakistani custody on Monday had created a furore in Parliament and External Affairs Minister Sushma Swaraj on Thursday (December 28) made statements on that in the Rajya Sabha and the Lok Sabha.

The minister’s statement met with complete support from all MPs, cutting across party lines. The minister also said that the action of the Pakistani officials and the reprehensible treatment meted out to Jadhav’s family gave India more ammunition to take to the International Court of Justice where Jadhav’s death sentence is being argued. The ICJ has put a stay on the death sentence.

On their return to India Jadhav’s family – mother Avanti and wife Chetankul – had met the minister for a debriefing and had detailed what had happened. She informed the House that the two were not only forced to change their clothes, they were also asked to take off their shoes, mangal-sutras, bindi and bangles.

Strangely, Chetankul’s shoes were not even returned by Pakistan. The Pakistani officers claimed that there was “something metallic” in them and they are supposedly being examined by forensic experts.

Then they were also harassed by Pakistani media when they were waiting for their car outside the Pakistan Foreign Office.

The following were the deliberations in the two houses.

Sushma Swaraj: “As we all know the foreign ministry along with the Pak government had organised for Shri Jadhav’s family to meet him in Pakistan on Monday.

“The family wished to meet Mr Jadhav and we arranged for it. Even Pakistan agreed for it this month. This could have been a step forward for both countries, but this wasn’t to be. The meeting between a mother and her son, a wife and her husband after going through so much was turned into an exercise of propaganda and an opportunity to exploit the situation.

“The manner in which the meeting was organised was appalling… their clothes, shoes, bangles, and even their mangalsutra was taken away… Both Mr Jadhav’s mother and wife were presented as widows in front of him..”

“The first thing that Kulbhushan asked his mother was ‘What happened to father?’ after he saw no mangalsutra on his mother.

“I reconfirmed this with the family this morning to be absolutely certain of this.

“The shoes have not been returned … we had warned of something like this… Pakistan’s behaviour has been beyond absurd… sometimes they claim a microchip, sometimes a recorder, and sometimes a camera… What about the Emirates flight they took? These were the shoes they wore during their travel… If that had been the case, they would have been detected at security check before they boarded the Emirates flight.

“We condemn such shameful behaviour by Pakistan and will not take in silently. We will expose Pakistan’s utterly disgusting behaviour,” she said.

Then, in a rare show of unity, all parties endorsed her statement and were in complete agreement with her.

The BJP’s severe critic, The Trinamool Congress’ Derek O’Brien said: “We are in complete agreement with every word of what the minister said. We stand by the statement and support the government on this.”

Also, in a move that is not a tradition in the Upper House, Venkaiah Naidu chairman of the House commented that though he usually refrains from making such statements, he noted that every single member and party in the House was in agreement with the minister’s statement. All claimed that justice be done to Jadhav and his family.

Gulam Nabi Azad said: “I had to say a lot of things. The false allegations that Pakistan has put on Kulbhushan Jadhav can become more problematic if we make too much noise. The disregard that Pakistan has shown towards Mr Jadhav’s mother and wife is sad. They have disregarded the women of India. Pakistan government has to assure that they would not disrespect the women of our country in this manner.”

The issue was brought up again in the Lower House. As the foreign minister repeated her statement, members of the Lok Sabha chanted “Pakistan murdabad”.

Swaraj also informed the House: “The intercom was switched off when mother spoke to Mr Jadhav in Marathi.

“We will now take even more concrete evidence to the International Court of Justice proving that all allegations made by Pakistan are false.”

The house went on to other issue after that.