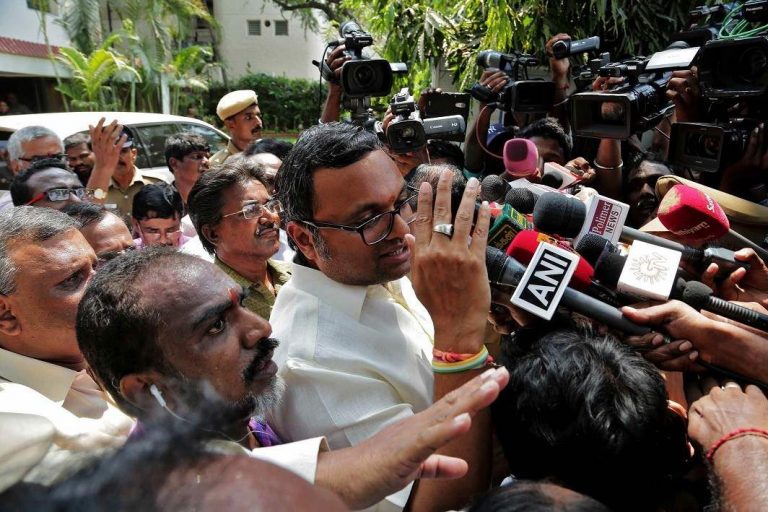 The Patiala House Court on Tuesday (March 6) extended the remand of Karti Chidambaram for three more days in the case of Karti allegedly having taken bribes to get the FIPB’s FDI clearance for INX Media.

On Tuesday, Karti Chidambaram was produced before the Court. Additional Solicitor General (ASG) Tushar Mehta again sought extension of remand for nine days while submitting some information in a sealed envelope.

“As per prima facie material and as per the case diary, there is need for custodial interrogation; our assessment is for a larger number of cases. The effective custody was only for four days,” Mehta submitted.

Senior advocate Abhishek Manu Singhvi, appearing for Karti, told the court that his client was questioned only for 25 minutes while in custody for five days. “Some media says 4 hours. Here is the accused, ask him how much time he was questioned. They now say they need police custody again. What did they do in 5 days?” Singhvi asked.

Mehta countered: “We have the video recording of Indrani Mukerjea. In this case, only Indrani is not the witness. During the investigation, many things have come to the fore which we cannot divulge in open court. We are noting down things in the case diary. Yesterday, the case witnessed a new turn. For that, we have to interrogate Karti.

“We have achieved much success in the past few days in the case. Despite that, we need nine days more. Whenever we interrogate Karti, he replies that he is in the CBI custody because of political reasons. When we speak about the company he says that is being victimized for political reasons.”

Mehta submitted the money trail of ASPCL company to the court.

To which the Singhvi replied: “This is the new ploy of CBI to defer the case in order to prolong the remand of Karti. There is no reason that justifies that Karti’s remand be extended. The CBI has not given me any documents. However, it has submitted some documents to you. When the accused is in your custody, how can he tamper the evidences? The CBI had the time from 9 am to 6 pm to interrogate the accused.”

Singhvi continued: “The CBI should furnish the case diary. Does that mean that when I am on bail I will not answer your questions? Evidence Act says that the confession made before the police is not admissible. And only the confession made before the magistrate is admissible. This means that everyday CBI will appear and say that we have got X information about it. So please do not extend remand.

“Not a single tampering evidence has been produced before the court by the CBI. If you didn’t have the proof of tampering for the last one year, how do you have it now? The extension of police custody application by CBI does not have any grounds.”

Mehta replied: “I will satisfy the court within 10 minutes. If court extends the custody then I will get a confession out of it. I can do the further interrogation then. Indrani Mukerjea’s statement is also one of the evidences. Her confession statement is one of the important evidences we have. After seizing the mobile phone of Karti Chidambaram he said he will not give the password of his phone and said: you go to hell  is also a proof of non-cooperation. I agree that Karti Chidambaram has a right to remain silent. But when relevant questions are asked he should answer them.”

Singhvi reiterated: “Karti is not a terrorist that he cannot be interrogated without keeping him in custody.”

Mehta countered Singhvi by saying: “The case is not based solely on Indrani Mukerjea.”

It is to be noted that Indrani stood by the claims that Karti asked for bribes when the two met face to face in the Byculla jail yesterday.