Jammu and Kashmir High Court has withdrawn the advertisement which invited applications from across the country to fill up vacancies of 33 non-gazetted posts in district courts of the Union Territories of Jammu and Kashmir and Ladakh.

This move came after the abrogation of Article 370 and 35A of the constitution of India, which stripped off the ‘special status’ from the state of Jammu and Kashmir.

The advertisement to fill the vacancies was issued by the J&K High Court’s Registrar General Sanjay Dhar on December 26, 2019. The last date that was notified for submission of applications was January 31, 2020.

“It is hereby notified for information of all concerned that the advertisement Notice of December 26, 2019, whereby applications were invited for different posts in Non-Gazetted category in the High Court of Jammu and Kashmir stands withdrawn with immediate effect,” Dhar said in a fresh notification issued on Tuesday evening.

Although the withdrawal of the notification has not mentioned any reason but this move comes amid protests from various quarters. Several opposition parties had slammed the notification, the National Conference, JKNPP and Left parties had univocally demanding reservation for locals in government jobs in J&K.

Provincial President of National Conference Devender Singh Rana had said, “J&K government jobs are for local educated unemployed youths and should be reserved for them only.”

State Secretary of CPI(M) Ghulam Nabi Malik had also opposed the move saying it is the BJP government’s “first gift” to the unemployed youths of J&K.

The earlier notification had 33 non-gazetted vacant posts on offer in J&K and Ladakh, including senior and junior scale stenographers, typists, compositors, electricians and drivers.

Responding to a question on the issue of jobs in Jammu and Kashmir to locals, Jammu and Kashmir administration spokesperson Rohit Kansal said, “there have been various suggestions that have been received by the government and these are under examination”. 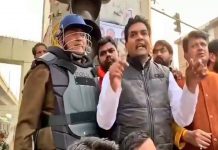