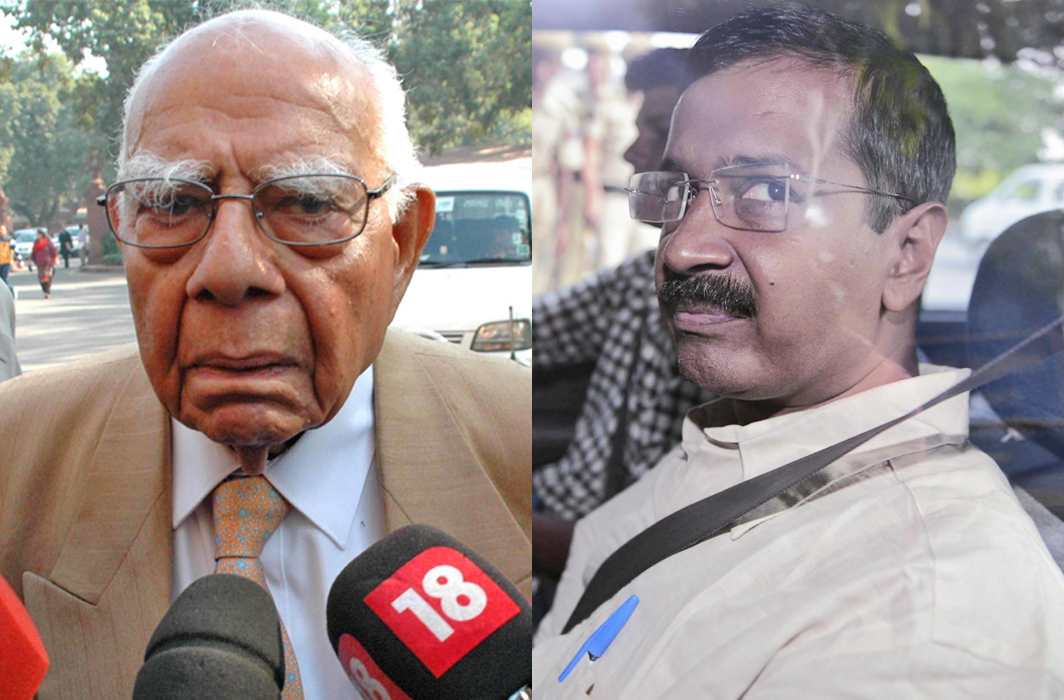 Senior advocate Ram Jethmalani, has washed his hands off the Arvind Kejriwal-Arun Jaitley defamation case, though the Delhi CM is now left with picking up the pieces and settling down to a more prosaic existence in the courtroom.

Jethmalani, meanwhile, has written an almost emotive letter to Kejriwal, detailing more alleged acts of corruption by Jaitley while also adding a caveat for his own actions in court for which Kejriwal is now facing the music at the Delhi High Court. Justice Manmohan Singh has strongly condemned the “indecent, scandalous and abusive” words used by Kejriwal (actually by his then counsel Jethmalani, who had said that he was instructed by his client to say these words, including the word “crook”, a position that Kejriwal has said on oath that he had not) and has warned that no more such action will be tolerated.

Jethmalani has not denied anything except that he has put the onus, in a way, on Kejriwal. He has written to Kejriwal: “Ask your conscience how many times you used worse abuses than a mere ‘crook’. You have hundred times asked me to teach this crook a lesson.”

He has accepted that a chill did descend between the two, by saying that Kejriwal had not met him recently. This is a letter that Jethmalani has written to Kejriwal (dated July 20) and has uploaded on his blog. (Please see below)

The letter also rambles on about several other aspects, including some more allegations against Jaitley (with no corroborative evidence), but the entire episode seems to be covering up for the accusation against Kejriwal and, near the end, a notice of demand for payment. He writes: “One thing is certain I will now not appear in any matter for your defence, only pay the settled fees for the 1st matter and nothing for the second.”

If that sounds fair, “settled fees” is said to be around Rs 2 crore.

The big lesson in this is for Kejriwal. Whatever the merit of his defence against Jaitley’s first Rs 10 crore defamation suit against him and others in the government, this cloud will keep hanging over his head. That is a major headache, especially when the high court has taken unkindly to the unparliamentary words used by Jethmalani.

Kejriwal’s new counsel, Anoop George Chaudhari, not only has to now go through a web of briefs that may have to be reorganised as per new instructions, but also has to keep his wits about himself in addressing an already irate court.

All that will not be good for Kejriwal. It was a bad experience for the already embattled Delhi CM. 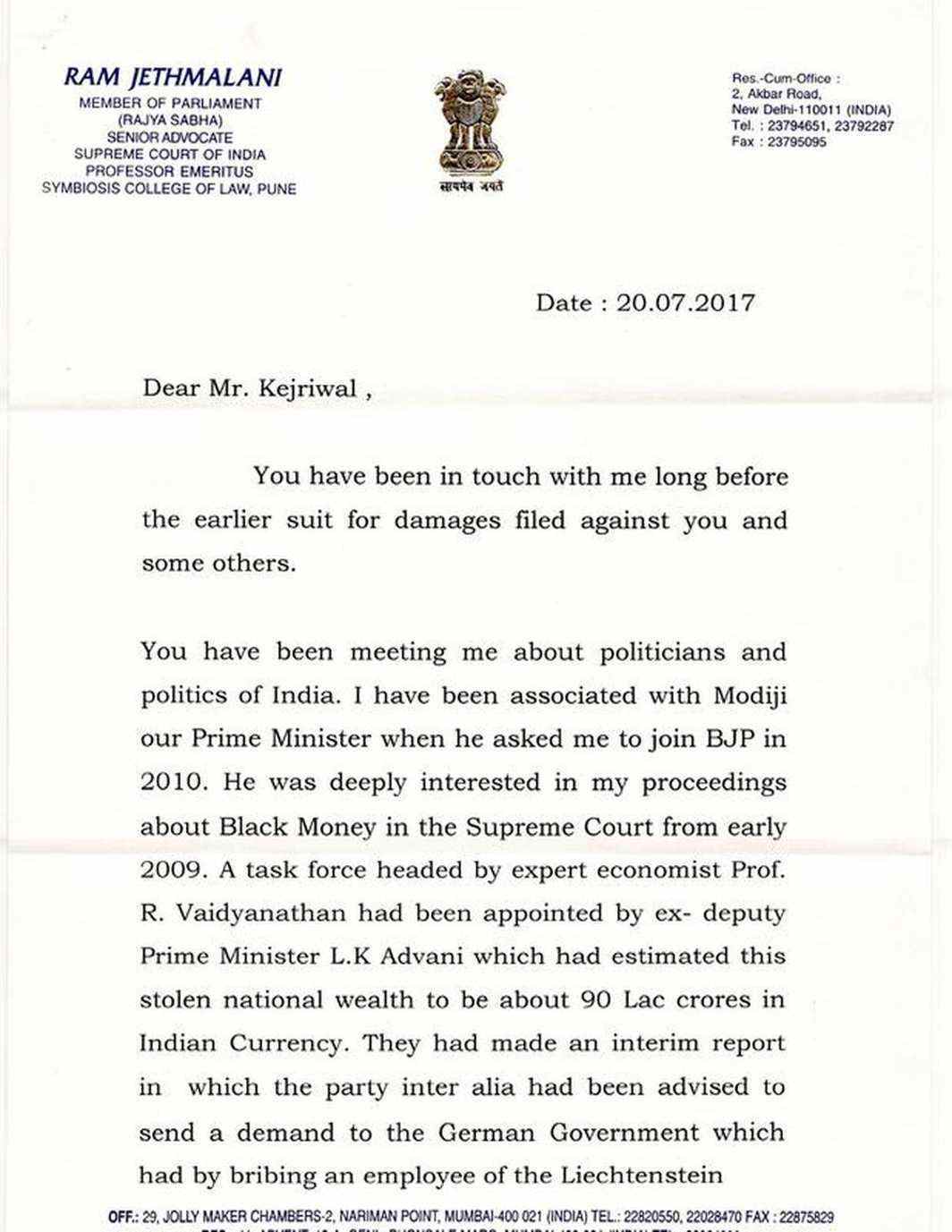 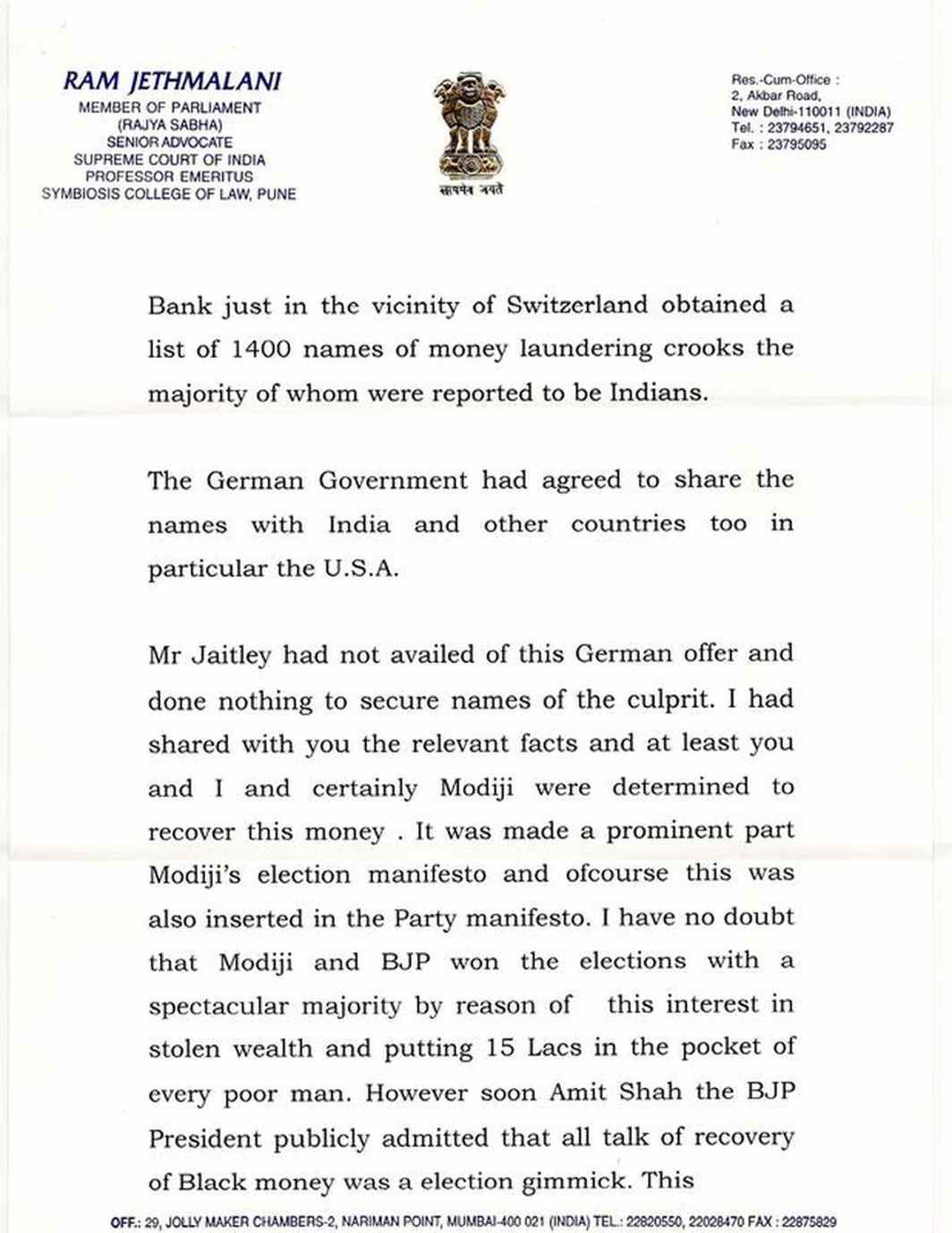 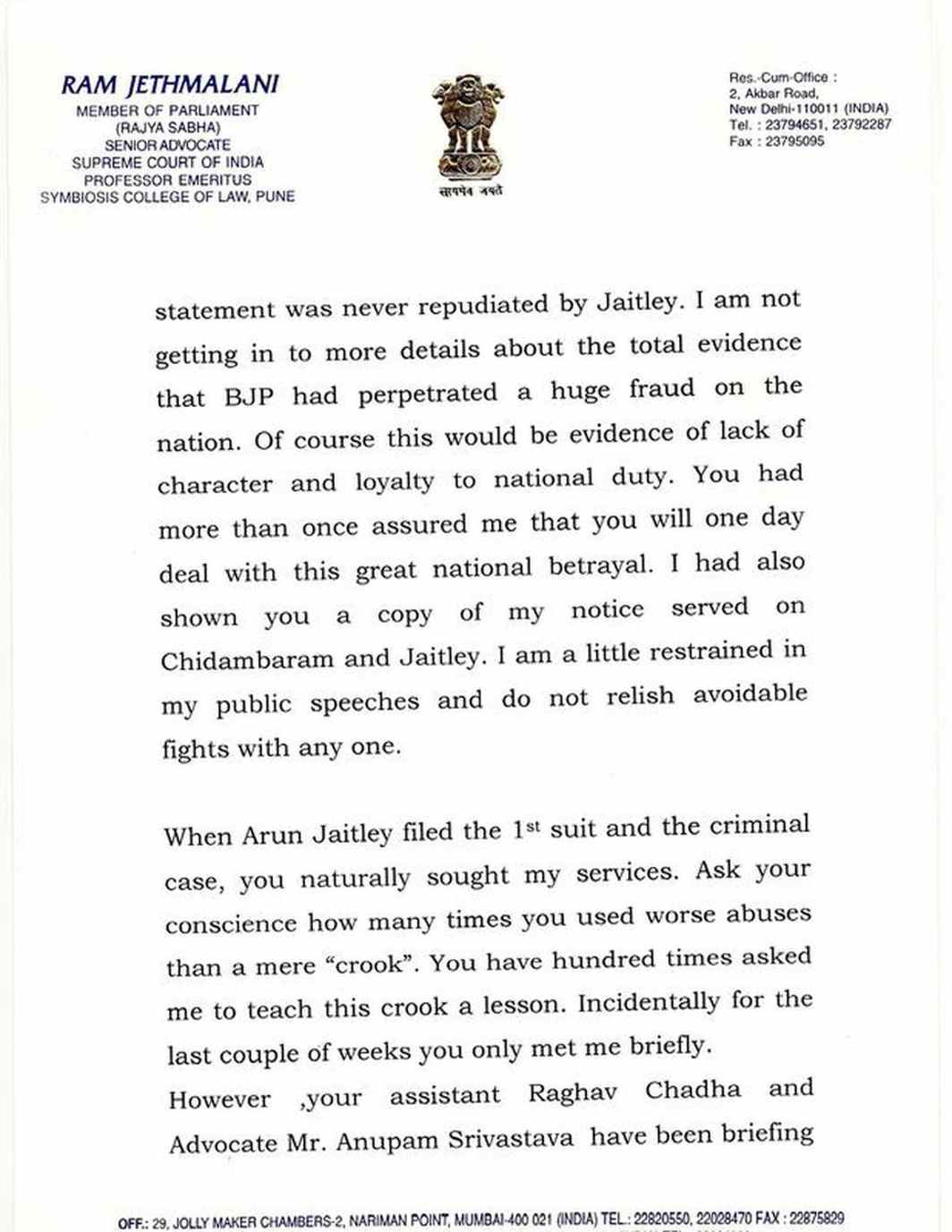 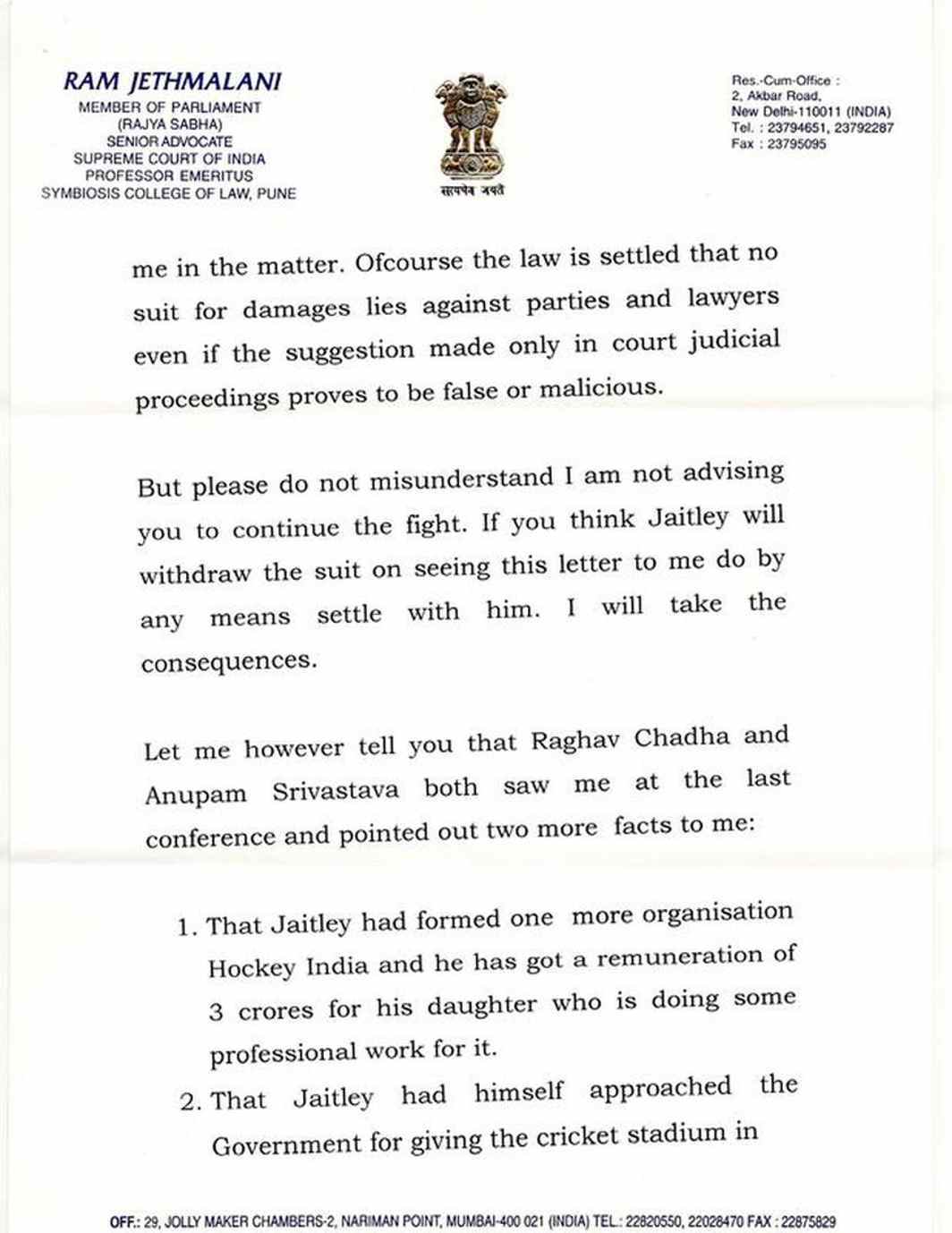 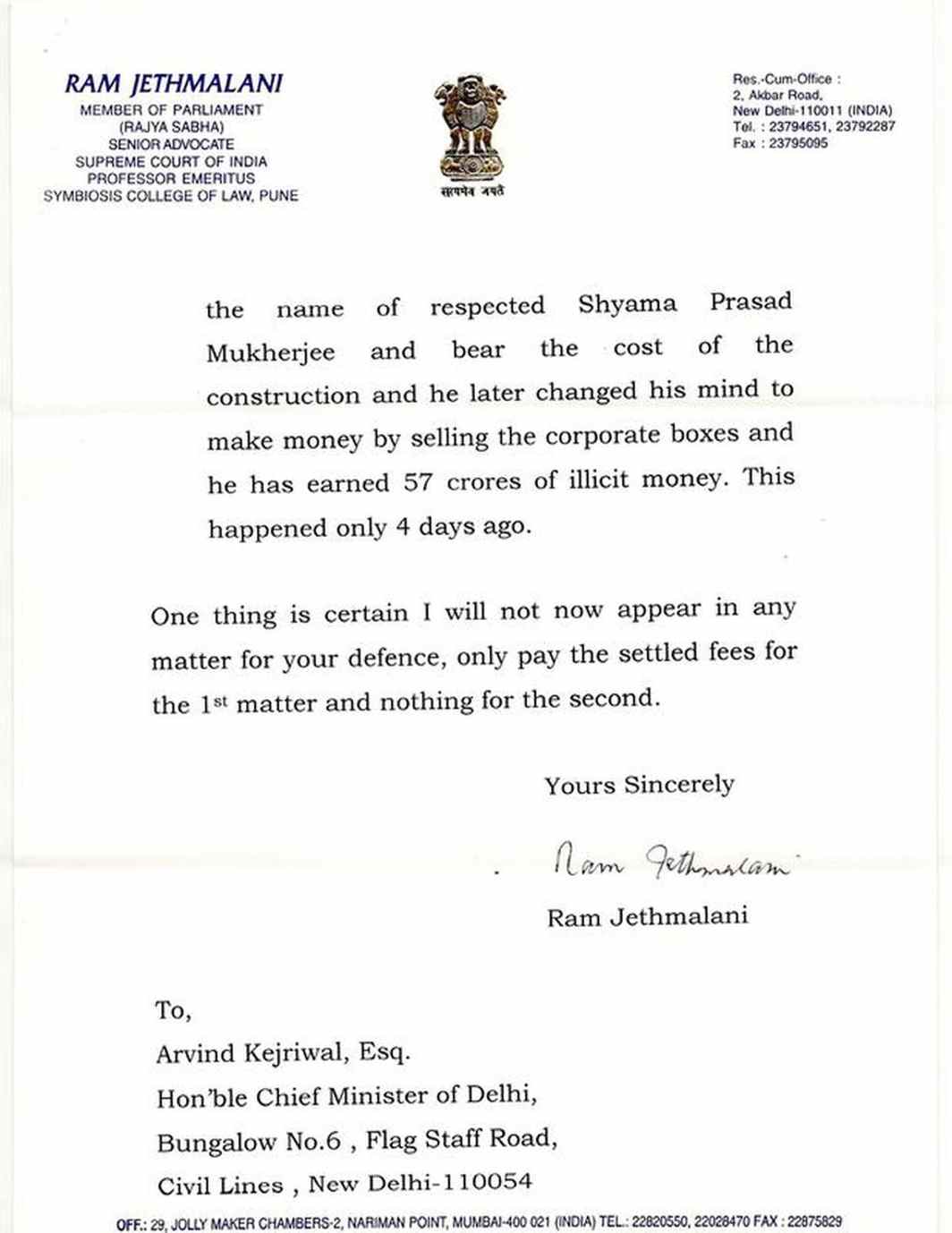