A private builder and operator has set up a helicopter maintenance, repair and operation service, plumb in the middle of a densely populated residential complex in Greater Noida, barely 10 minutes of flight time from New Delhi’s highly secure no-fly zones. Flights of several private parties ply from here, without any presence of CISF or other security personnel and with no search of passengers. 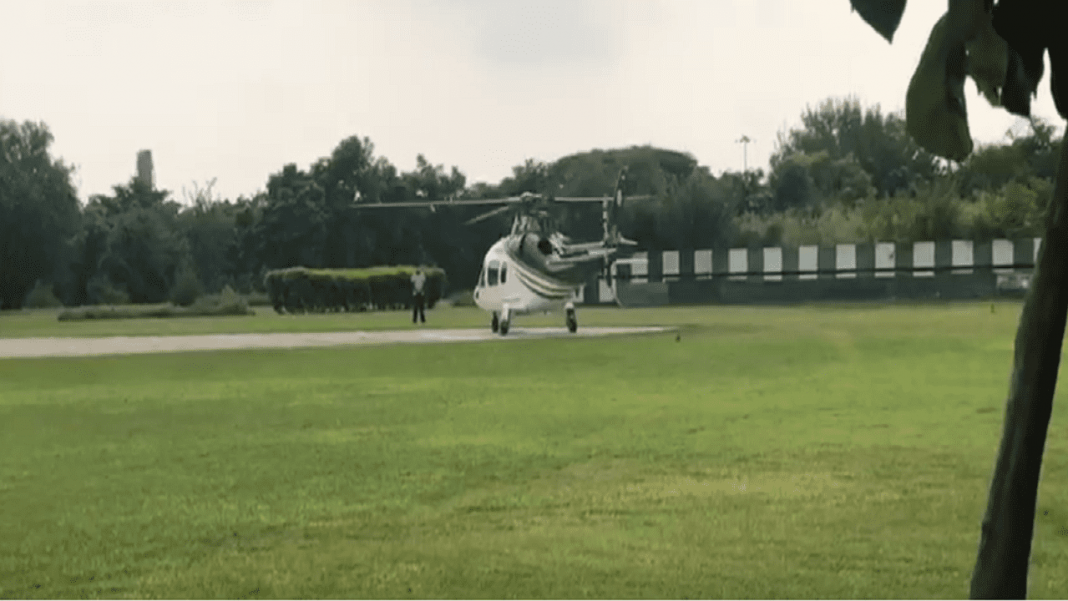 Helicopter flights in India have become almost commonplace, especially for relief purposes, for religious travel and for several other emergencies. There are also pleasure travel and short-hop flights operated by private companies. However, for each helicopter service centre – which would comprise a helipad and other allied facilities – there are security restrictions in place, especially in and around New Delhi, where the country’s VVIPs live.

A large airspace around the Prime Minister’s residence, for example, is a No-Fly Zone (NFZ) for security reasons. There was a major fright in May 2019 when a regular Spice Jet commercial flight came too close to this NFZ by mistake and an inquiry was launched. Not just the PM’s house, but there are several other high security buildings in New Delhi over which flying would be against national interest.

Amid this, think of a situation, where a pilot of a private helicopter operator takes off from a non-scheduled helipad – even irregular maintenance, repair and operation (MRO) facility – around the National Capital Region (NCR), barely 40 km from Lutyens’ Delhi. The aircraft has launched from a facility with no official security arrangement at all (such as the presence of CISF personnel) and is carrying unverified (and un-searched) passengers. Think of a situation where this aircraft mistakenly rolls over near the PM’s residence, and then think of a possible situation where one of those unverified passengers (having not undergone security checks) has a devious agenda and has taken a ride on the helicopter with malicious intent. Extend your imagination to a situation where this person – a potential terrorist – is carrying a weapon or a bomb. Realise the huge security risk such a helicopter can pose for national security?

Remember that on an average, a civilian helicopter can travel at 200-250 kmph. Which means Lutyens’ Delhi is just about 10 minutes or less after takeoff.

Having noted this possible danger, the Director General of Civil Aviation (DGCA) has already restricted helicopter services from the Safdarjung Airport, it has been reliably learnt. But there has been no special inquiry into a particular MRO facility near New Delhi, in Greater Noida from where such unverified helicopter services continue unchecked.

National security, especially in these troubled times, is not just a matter of securing the country’s borders. As experience of several terror attacks has taught us, it is also a matter of securing systems and facilities within the country. India takes these security measures very seriously, and that is why these high security air spaces have been designated around the Prime Minister’s residence and around several installations/buildings of national importance. Hence, when there exists a helicopter MRO facility so near security zones, does it not become imperative for the government’s security agencies to take a long hard look at it?

India Legal sent an email to Manoj Gaur, Executive Chairman & CEO, Jaiprakash Associates Ltd., with a detailed questionnaire and asking for his comments on the entire issue, so that we might be able to place before our readers a balanced view. That email has not elicited any response.

Under the subject Commercial Helicopter Operations, it has a section called SECURITY.

“11.1 Helicopter search procedures checklist. An operator shall ensure that there is on board a checklist of the procedures to be followed in searching for a bomb in case of suspected sabotage. The checklist shall be supported by guidance on the course of action to be taken should a bomb or suspicious object be found.”

Logically, this would require involvement of proper government security agencies, such as the CISF, which aren’t visible anywhere near this facility.

Not that this facility operates in secret. It is situated plumb in the middle of a densely populated residential complex, comprising 48 high-rise buildings, and the Jaypee Greens Residents’ Welfare Association (JPGRWA) has been up in arms for a while, running pillar-to-post to impress upon the authorities on not only the immense health and life risk such a facility poses for residents, but also how dangerous such a facility can be for national security.

The several authorities approached so far have paid scant attention to this and the residents feel this extreme laxity on the part of security agencies and other authorities just might blow up in the face of the country. The clock is ticking.

Let us see what the JPGRWA has been up to in its efforts to get justice and to secure life and limb of its residents as well the security of the country at large.

The helicopter facility was, reportedly, allowed permission to operate by the DGCA in 2000 when the entire Jaypee Greens facility had not even been fully conceptualised. It was purportedly to be used for the quick transfer of the owners and top officials of Jaypee Associates Ltd (JAL), the promoters. Later, when the 48 high-rise buildings, a temple complex, several villas and the expansive golf club, as well as a five-star facility, called the Jaypee Greens Golf and Spa Resort, was developed the helicopter facility, plumb in the middle of it, naturally became unviable.

The reason for this was primarily noise pollution, at over 100db and above, when allowed ambient levels are 55db near a residential complex, and air – as well as safety of lives of the residents. There are over 1,100 families out of 1,730 residential clusters presently (1,502 apartments + 228 villas) now living in the complex, cheek-by-jowl (within 200m) of the helipad. And while single-engine rotary wing aircraft (helicopters) are generally accepted to be unsafe, such a facility within the densely populated complex seems completely unacceptable.

The helicopter facility does have DGCA permission but the allegation of the residents is that this permission was availed of before the towers came up, and now it poses a health and life risk for all residents, said the JPGRWA. Complaints were lodged with the Director General of Civil Aviation at DGCA Headquarters, opposite Safdarjung Airport on October 15, 2020 and with the Director General, Bureau of Civil Aviation Security (at Janpath Bhawan in New Delhi), also on October 15, 2020.

“We, as residents, are very apprehensive about the large influx of helicopters and passengers flying in/out through these helicopters from a non-securitized helipad from within Jaypee Greens premises to unknown destinations. This helipad is not protected by CISF personnel as per BCAS regulations. We also have not seen any police bandobast during take-off and landings. It is matter of national security to assess as to how these helicopters are safeguarded against any dangerous load or terrorist activities lest it becomes the weakest chain in the air safety infrastructure of the nation.”

The entire national security issue also seems to have been glossed over by the authorities.

Residents have observed different types of helicopters operating from the helipad. For the builders, the company which operates is the Himalyaputra Aviation Limited, a JP Green company. This is a privately held company, incorporated on July 23, 2011, with its directors being Shyam Datt Nailwal, Rekha Dixit, Gyan Prakash Gaur.

The residents, including some senior retired Air Force officers, have also noticed that after repairs, these helicopters are flown around high-rise buildings, such as Moon Court (15 storeys), Star Court (21 storeys), Sun Court (30 storeys) etc as test flights. Hence there remains a huge possibility of them crashing on the densely populated towers.

The question arises, therefore, that if non-scheduled operations do happen from this helipad, along with repair and maintenance, and if many of those helicopters aren’t even owned by the builders, do the authorities have any protocol in place to handle this situation?

The residents have wanted to know “whether the licence to operate an MRO for helicopter services inside a high-rise residential community of ours Jaypee Greens have (sic) been granted by the concerned approving authorities, and even if granted in oversight needs to be revoked immediately”.

The residents have also mentioned a Times of India report of January 20, 2018, following some helicopter mishaps. The report says:

“Rattled by a series of helicopter mishaps faced by chief minister (BJP’s Devendra Fadnavis), the state administration has decided to set up helipads only at select places, like MIDC estates, open playgrounds or police parade grounds in and around towns or villages.

“The helipads’ radius should be about 500 metres without any cable, wire or high-rise building intercepting gliding paths, policy finalised by the state have suggested. The guidelines were issued by Friday to local administrative offices across the state.

“The basic certification of the site will have to be done by the Collector, on whose recommendation the director of the state’s civil aviation wing will inspect and approve it for landings and take-offs,”

“…A review of this policy was sought after the Latur mishap, when the CM and his officials escaped with minor injuries. Operators of the helicopters carrying VIPs will also be able to scrutinise the sites before scheduling operations.

“While amending the policy, the state has followed guidelines which exist in Europe and the US. All our regulations can suit conditions needed to operate helicopters weighing around 5,700kg,’ senior protocol officers said. The guidelines set by the directorate general of civil aviation (DGCA) have been incorporated to ensure maximum safety during landings and take-offs.

“Another senior official said the biggest roadblock in creating safe helipads was local administrations, especially officials in infrastructure agencies, who have to act in accordance with guidelines while creating helipads. ‘Delays in budget provisions for helipads is another hurdle in achieving targets,’ he added.”

The residents have placed this report before the DGCA as precedent and the question arises that if that could happen in Maharashtra, when a BJP government was in office at the time, why can’t it happen in Uttar Pradesh which is also ruled by a BJP government?

Politics aside, though, the issue is not just of personal safety, but of national security.