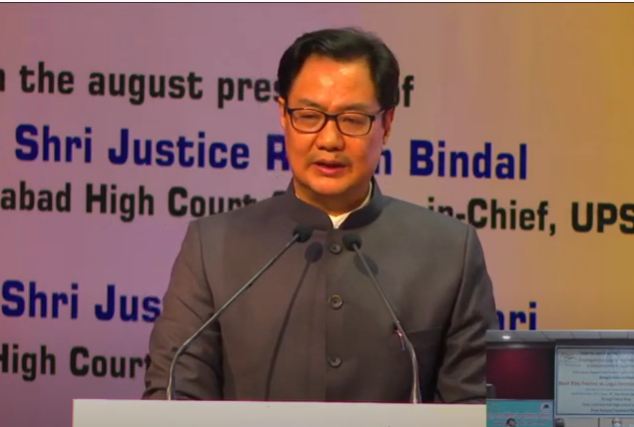 Union Law Minister Kiren Rijiju said on Monday that though the appointment of Judges had no direct involvement of people as such, but their way of functioning and dispensing justice was under the scanner now, thanks to the social media.

Speaking during an event organised by Delhi Bar Association at Tis Hazari Courts to commemorate the 74th Republic Day, the Union Minister said that judges were appointed once and they did not have to face elections. They even had immunity to scrutinisation, however the same did not extend to the verdicts delivered by them.

Rijiju said though people could do little to change the judges, but their judgments, their way of functioning and dispensing justice, were all under the public eye. People were watching them and making assessments. Nothing could remain hidden in the age of social media, he added.

Regarding public debates, the Union Minister recalled that when he was the Leader of Opposition, there were not many avenues and opportunities to engage in public discussions and that only popular and very few Parliamentarians participated in television debates.

The Minister further said that it was a good trend, since the government and those running it were answerable to the people, who chose them as their representative.

Speaking about Chief Justice of India (CJI) D.Y. Chandrachud, Rijiju said that they shared a ‘live contact’ between them and met on a regular basis.

As per the Minister, difference of opinions were bound to happen, since they both discussed almost every small or big issue concerning the country.

Regarding the CJI approaching him for initiation of concrete steps over adverse comments passed against the judges on the social media, the Minister said that nothing could be done, since it was happening on a large scale.

He said the scrutiny and criticism of public, which was till recently being faced by the political leaders and Ministers only, had now become a part of the judges’ lives also, which has made the latter more careful.

As per the Minister, a robust and independent judiciary was a must in India, for a vibrant democracy to flourish in the country. If the dignity and honour of the judiciary was weakened, the democracy would not succeed.

Rijiju rubbished the reports, which claimed that he wrote a letter on January 6 to the CJI, asking him to have a government representative in the Supreme Court Collegium.

He said it was not a public announcement, but a regular procedure he followed, on the directions of the Supreme Court.

Divulging the details of the letter, the Minister said it referred to a direction given by the five-judge bench of the Supreme Court in NJAC case in 2015, which should be taken forward.

Rijiju said that if he had not written the letter, then people would have said that the Law Minister was not following the order of the Supreme Court. now that he done the same, people were asking why he did so.

The Minister further said that there should not be any debate or discussion without any basis.

Calling it a sensitive matter, Rijiju said that the Collegium consisted of five people – the CJI and four judges. He wondered as to how could he bring someone from somewhere and put them in the collegium?

He further expressed unhappiness over some former judges and senior lawyers giving statements regarding his letter, stating that there should be a way to all this.