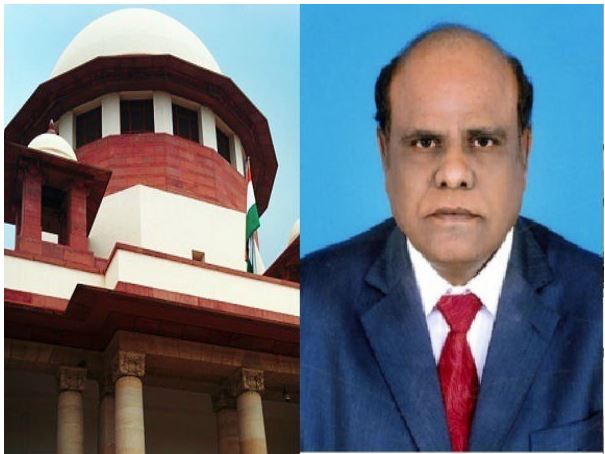 The Supreme Court on Wednesday will hear a plea filed by Delhi Tamil Advocates Association seeking directions to the Centre to stop a video of Justice CS Karnan circulating on social media in which he uses indecent and filthy language against the judges of SC and HCs. A bench of Justice A. M. Khanwilkar and Justice S. Ravindra Bhat will hear the matter. The matter was listed previously on October 26, when, at the request of Senior Advocate Aryama Sundaram for the petitioners, the matter was adjourned for three weeks.

“In the alleged video Retd Justice Karnan is questioning the Judiciary as well as democracy and using indecent, obnoxious and unparliamentary language and threats against the wives of the Judges of the Supreme Court and other judges serving and retired,” the petition said. “Retd Justice Karnan can be seen in the video footage making serious allegations against one of the sitting judges of the Apex Court and threatening to do indecent acts with the wives of the Judges in the Court premises.”

The petitioner association submitted that Retd Justice Karnan had been sentenced six months imprisonment by the Supreme Court in a contempt case and soon after completing his punishment he formed a political party, namely Anti Corruption Dynamic Party. In the alleged video, he can be seen making scandalising, unparliamentary and highly objectionable language/remarks and political allegations against retired and sitting judges of the Apex Court and High Court. The video is running for about 2.58 minutes is being openly circulated in public domain through social media in order to malign, tarnish and damage image of judges of Supreme Court and High Court, said the plea.

The Madras High Court on Monday had directed the Commissioner of Police, Chennai and the Director General of Police be personally present in Court on December 7 while it was hearing the pleas on the same issues seeking initiation of criminal action against Karnan. The pleas landed in the Madras HC seeking initiation of criminal action after several videos surfaced online featuring Karnan making derogatory remarks against judges and women.

In October this year, the Supreme Court termed it as “unfortunate”, an attempt by Retd Justice Karnan to forcibly enter the house of Retd Supreme Court Judge Justice Banumathi in Chennai. A three-judge bench headed by Justice AM Khanwilkar had told advocate Sundaram “to take appropriate actions including filing representations and complaints”.