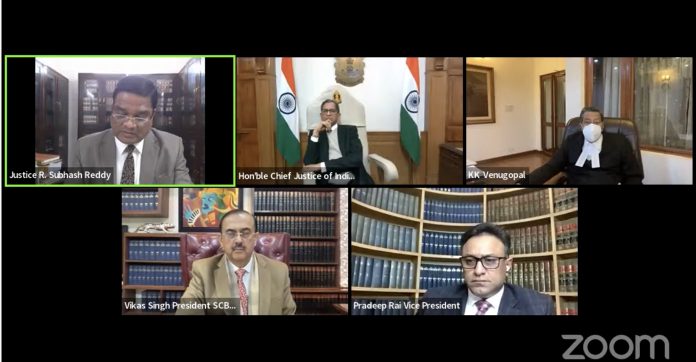 Supreme Court judge Justice R. Subhash Reddy, who retired on Tuesday, said there has been a gradual decline in the efficiency and the quality of justice in his farewell speech at an event organized by the Supreme Court Bar Association on Tuesday.

“The public confidence in the court depend upon the efficiency of the judiciary. There has been a rapid change in the values of life and morals and the need replaced by greed. The deterioration in the human values has an impact for once alarming rise in cases and crimes.”

Speaking on the pendency of the cases, Justice Reddy said:

“All the courts in our country have a huge backlog of pending cases. Every year, this backlog swells in size because of the increase in several kinds of courts procedures. The existing procedural laws are not designed to meet the challenges which courts are facing today.”

“The time consuming traditional procedures, civil and criminal prescribed in the 19th century for the trial of cases in a pre-industrial socirty require to be mordernised to suit the needs of a modern society.”

Calling the SCBA a big thinktank, he said, after joining as the judge of this court, he had a great opportunity to hear eminent lawyers of the Supreme Court bar and that he felt enriched by hearing them.  Such kind of bar is an asset to the nation, he said.

“When 70-year-old lawyers can function with no difficulty whatsoever, Why should not the judges of the Supreme Court retire at the age of 70 and High Court judges at 65 so that all the experience and expertise came by them would be able to do credit to the judicial institution?”

Venugopal said: “It is time that the higher judiciary and the government of India put their heads together to come up with a scheme for this purpose.”

SCBA president Vikas Singh said that Justice Reddy’s popularity and standing at the bar is reflected by the fact that he was the only advocate in the last 25 years to have been unanimously elected as the president of the Andhra Pradesh HC advocates’ association for 2001-02.

“Before becoming the Judge of Andhra Pradesh, Justice Reddy had practiced law for 22 years in the Tribunals, civil courts and High Court of Andhra Pradesh. He actively participated in almost all the branches of law. He specialized in constitutional law.”