The death of long-ailing DMK patriarch M Karunanidhi in Chennai late Tuesday (August 7) is a huge blow to the political future of Tamil Nadu. Virtually a self-made man, Karunanidhi was a top film scriptwriter, but then evolved into a leader who wrote the script of many a political upheaval in the state. Even in his 90s (he was 94 when he passed away), he remained one of the key movers and shakers of the political world. 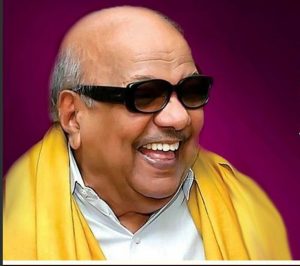 His immense political clout was evident in the arrival on Wednesday (August 8) of Prime Minister Narendra Modi in Chennai to pay his last respects. Modi’s visit is also crucial at this point, because Tamil Nadu would surely hold a special place in the ensuing general elections next year, and any show of concern and care from the Centre would go a long way in building bridges between the DMK and the BJP that had been destroyed in the recent past, especially with Modi having visited the state when Jayalilathaa died and O Panneerselvam was in a piquant situation.

A legal issue has arisen, however, in which the DMK’s demand for burial of Karunanidhi’s mortal remains near Anna Memorial at Chennai’s Marina beach had been rejected by the goevrment. The Madras High Court, in a special sitting early today directed the state government to provide a space near the area for a decent burial for Karunanidhi who died at Kauvery Hospital in Chennai yesterday. The issue was supposed to be sorted out last night itself, but the AIADMK government had sought more time to reply after initially having rejected the request from DMK.

On Wednesday morning the body of Karunanidhi was taken to Rajaji Hall where a large number of his followers queued up to pay their last respects.

Also present to pay his respects would be President Ram Nath Kovind, Congress chief Rahul Gandhi and others.

Parliament remains adjourned today as a mark of respect to the departed leader.