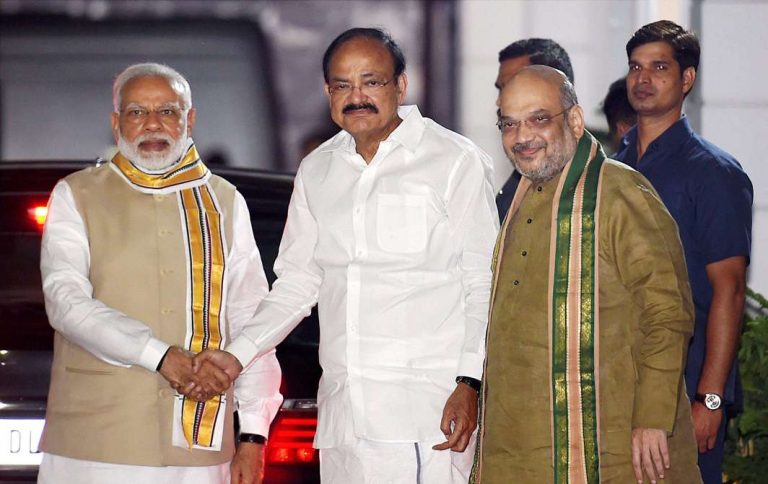 As Vice President, Naidu also becomes the ex-officio Chairman of the Rajya Sabha, where BJP on Thursday overtook the Congress as the single largest party with 58 seats. The Congress has 57.

The voting began at 10 am Saturday and went on till 5 pm in the evening. Prime Minister Narendra Modi, NDA’s vice presidential candidate Venkaiah Naidu and Uttar Pradesh Chief Minister  Yogi Adityanath, who is yet to give up his Lok Sabha membership, were among the first to cast their ballot.

Voting ended with 771 out of 785 votes polled, with a poll percentage of 98.21%. There were 14 MPs absent from voting; 2 from BJP, 2 from INC, 2 from IUML, 4 from TMC, 1 from NCP; 1 from PMK & 2 Independent. BJP MPs Sanwarlal Jat and Vijay Goel could not vote in the Vice-Presidential Election because they are hospitalised, reported PTI.

The total strength of the two Houses is 790, but there are two vacancies in the Lok Sabha and one in the Rajya Sabha. BJP MP in Lok Sabha Chhedi Paswan is barred from casting vote following a judicial pronouncement.

While Naidu had the support of the NDA parties along with AIADMK, TRS and YSRCP, Opposition candidate, former Bengal Governor Gopal Krishna Gandhi was backed by MPs belonging to the Congress, RJD, JD(U), NCP, Left and other smaller parties.

In the 545-member Lok Sabha, the BJP has 281 members. The NDA led by BJP, has 338 members. In the 243-member Rajya Sabha, the BJP is now the single largest party with 58 members, overtaking the Congress which has 57.

The Biju Janata Dal (BJD) and the Janata Dal (United) which had supported NDA nominee Ramnath Kovind for the post of president, had decided to back opposition nominee Gandhi. The JD(U) broke ties with ‘mahagathbandhan’ and joined hands with the Bharatiya Janata Party (BJP) to form a new government in Bihar, but decided to vote for Gandhi.

The term of the present incumbent Hamid Ansari, who has held the post for two consecutive terms, is coming to an end on 10 August.

Born July 1, 1949 in Nellore district of Andhra Pradesh, Venkaiah Naidu lost his mother when he was 18 months old. His father, too, passed away early and he was raised by his maternal uncles. Naidu, showed early signs of his leadership skills by emerging as the students’ union president.

Naidu came to into spotlight for his prominent role in Jai Andhra movement of 1972. In 1974, Naidu joined the protest against the imposition of emergency and became the Andhra Pradesh convenor of Jayaprakash Narayan led Chhatra Sangarsh Samiti. He was also imprisoned during this phase.

Naidu was elected to the Lok Sabha twice from the Udaygiri constituency (Nellore) in 1978 and 1983.

Naidu held the Rural Development portfolio in Vajpayee government and three ministerial positions in Narendra Modi government including the Information and Broadcasting Ministry.

He is one of the foremost admirers of the Prime Minister and has coined the phrase “MODI: Making of Developed India”.

Known for coining witty acronyms, Naidu did so recently with the initials of APJ Abdul Kalam when he said APJAK stands for “Anything is possible with Just Attitude and Karma”. The other acronyms he came up with are –

YOUNG – You Owe U and National Greatness

Ramesh also raised the decade old issue of allotment of land by the then Madhya Pradesh government to KTMT trust of which Naidu was the chairman. The Supreme Court on April 6, 2011 quashed the allotment of 20 acres of land made to KTMT trust.

However, Naidu refuted all the charges calling them politically motivated.