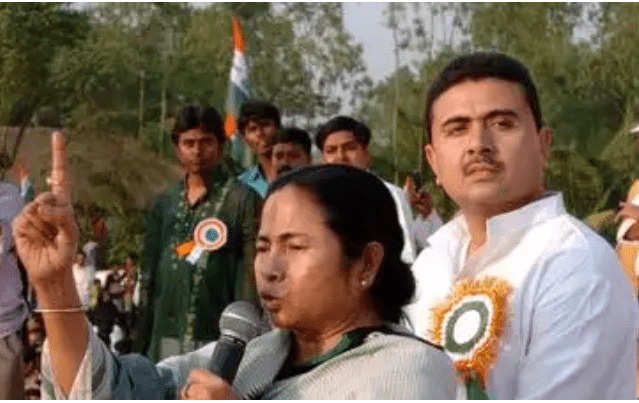 As a petition from Mamata Banerjee, as defeated candidate from the Nandigram assembly seat, challenging the victory of BJP’s Subhendu Adhikari, landed before the Calcutta High Court, the case was assigned to Justice Kausik Chanda. It was standard protocol that the Acting Chief Justice, as master of the roster would allot any case to a particular judge or a bench. However, Trinamool Congress (TMC) seems to have a found a major flaw in that assignment.

Soon after the assignment of Justice Chanda to the case, Trinamool MP Derek O’Brien tweeted pictures of a person, quite like Justice Chanda, before being elevated as judge and still a lawyer, attending a BJP meeting, alongside the party’s state president Dilip Ghosh. MP Mahua Moitra tweeted more pictures soon after and the issue snowballed into a major catastrophe of sorts.

It came to a head when Mamata Banerjee wrote to Justice Rajesh Bindal, the Acting Chief Justice of the Calcutta High Court, requesting him to reassign the election petition to a judge other than Justice Chanda. The letter to the Acting CJ was written by lawyer Sanjay Basu, saying that Justice Chanda was an “active member of the BJP before he became a judge” and this could lead to bias.

Justice Chanda, who was an Additional Judge of the high court for two years, was made permanent judge, but the letter says that Chief Minister Mamata Banrejee had at that time objected to it. That part too is brought forth in the lawyer’s letter, which states: “My client apprehends that the Hon’ble judge is aware of the objections and reasonably apprehends that there is a likelihood of bias on the part of the Hon’ble judge.”

The letter also stresses on the fact that the Justice Chanda is an active member of the BJP – this has to be proved in court, though – and that it might lead to a situation of perception “whereby the judge adjudicating the matter may be said to be “judge in his own cause.”

Despite Mukul Roy’s return to the TMC fold, Mamata has made it clear that Subhendu’s return would never be possible. The case against the Election Commission verdict is that the EC could not have denied the demand of recount made by the candidate and the TMC. This is more so, because initially, the commission had declared Mamata as the winner, before retracting its “announcement” and announcing otherwise. TMC alleges foul play, especially with the EVM and this is a direct confrontation with the EC as well as the BJP’s famed election machinery.

In this sensitive situation, Justice Chanda’s advent was sure to create issues. The hearing is next week, and if Justice Bindal refuses to change the roster, there could be other problems at hand to deal with for the court.