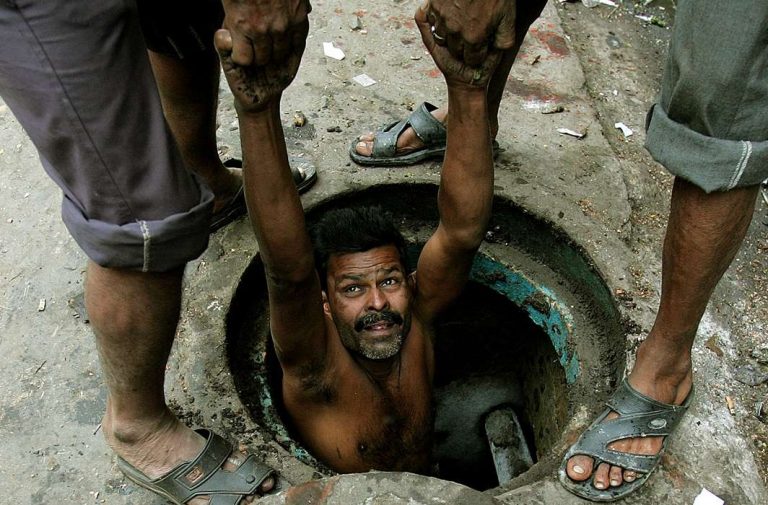 Over 25 years after it was banned by an Act, the practice continues and many states have taken the easy way out by outrightly denying that it exists

In the first week of the New Year, two men died of asphyxiation while cleaning a septic tank at a factory outside Chennai. They had been hired by the factory management to clean the septic tank at its premises. Police said that initially one of the men went inside and when he did not come out even after 20 minutes, the other went in too. Later, fire personnel who went in found that both men had died of asphyxiation.

The Prohibition of Employment of Manual Scavengers and their Rehabilitation Act, 2013, defines a “manual scavenger” as an individual employed by a local authority or agency for manually cleaning, carrying, and disposing of hu­man excreta from insanitary latrines. Shockingly, the two men were not classified as “manual scavengers” as the laws do not recognise septic tank and sewer line cleaners as “manual scavengers”.

There have been at least two major Acts passed by Parliament to ban and control manual scavenging, and yet the UN estimates that there are at least 20,500 people engaged in the age-old dehumanising practice. The Narasimha Rao government in 1993 passed a landmark legislation in the form of the Manual Scavengers Act, banning manual scavenging altogether and aimed at rehabilitation of scavengers. UPA II passed another Act in 2013 after it was reported that manual scavenging persists despite some progress.

The latest round of identifying and counting of manual scavengers began in 2014, was carried out again in 2017, and then restarted in January-June 2018. Two surprising facts have emerged: One, the practice persists and 95 percent of home scavenging is done by women; and, two, some states have resorted to under-reporting or misreporting the actual numbers.

A UN report in 2014 also estimated that in the House Listing and Housing Census 2011, states such as Andhra Pradesh, Assam, Jammu and Kashmir, Maharashtra, Tamil Nadu, Uttar Pradesh and West Bengal accounted for more than 72 percent of the insanitary latrines in India. States like Haryana, Madhya Pra­desh, Chhattisgarh and Rajasthan have caused concern regarding erroneous reporting.

Under the process of identification of manual scavengers, each district is re­quired to host a minimum of three self-declaration camps. The last round of counting was held in 170 districts across five states.

The law and after

The key features of the Prohi­bition of Employment as Manual Scavengers and their Rehabili­tation Act, 2013, are as follows:

There remain several challenges in implementing the legislation to ensure that manual scavengers can work and live with dignity. These include:

People are informed about the camps through newspaper ads, pamphlets and village-to-village campaigns. Transportation to and from the counting centres is provided. Personal documentation is also necessary to authenticate identity through the Aadhaar card, photocopy of bank passbook, and a declaration from either an employer or self.

Once the documents are verified, a form is filled in with photographs and details on whether the person is still engaged in the practice and how many latrines are cleaned per day. All this results in the identified person getting a one-time sum of Rs 40,000 in his/her bank account.

According to one of the government’s surveys, there are 12,742 manual scavengers in 13 states and a whopping 82 percent of these are in Uttar Pradesh alone.

There has been a major dispute over these figures not only from activists and Dalit politicians but even the Supreme Court which has said that this number is a gross under-representation. In contrast, the Economic Caste Census 2011 said that there are 1,82,505 families in rural India engaged in manual scavenging.

A district-wise survey by an NGO in Haryana recently revealed that in just three districts which had declared themselves scavenger-free, 145 cases were found.

The Ministry of Social Justice and Empowerment, after pressure from courts and activists, has recognised that the counting of India’s manual scavengers needs to be divided into two phases. The first involves counting those who clean night soil (buckets and cesspools in which excreta is collected overnight) and pit latrines. The initial figure mentioned above is from this count. The second phase, which has still not been com­p­leted, will look at people who clean septic tanks, sewers and railway tracks. The survey is expected to include those who have left the profession since 2013.

The problem with both pieces of legislation and their subsequent implementation is that the government’s arms themselves are involved in deploying manual scavengers in various regions.

The Railways and municipalities across the country employ manual scavengers to clean railway tracks and drains, and community sewers and manholes.

Not enough mechanisation has been done and the jamadaar community still exists in government papers and offices. What, however, can be totally obliterated is dry household latrines through the Swachh Bharat initiative and persistence of district collectors.