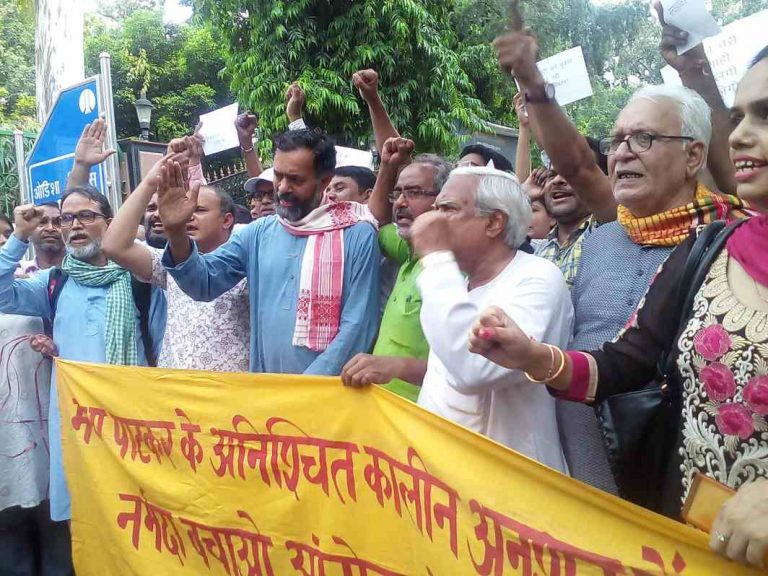 The Narmada Bachao Andolan leader had been forcefully shifted to a hospital from her hunger strike site; her followers were also lathicharged by the MP police

Social activist Medha Patkar has returned to her old site of protest, the Narmada Bachao Andolan, and had been fasting (12 days), along with 11 others, in Chikhalda village in the Dhar district of Madhya Pradesh, till the police forcefully removed her to hospital and lathicharged her followers, injuring around 40. That sparked off a series of protests, an outcome of which was seen in New Delhi on Tuesday (August 8).

On that day politician and activist Yogendra Yadav of Swaraj Abhiyan, Kavita Krishnan of the All India Progressive Women’s Association, Sandeep Pandey from Socialist Party of India, Shabnam Hashmi of Act Now for Harmony and Democracy and other representatives from different people’s organizations signed a memorandum asking for the release of Patkar.

Patkar had protested against the “illegal and forceful eviction of more than 40,000 families” from the dam site, with hardly any rehabilitation and compensation provided.

Madhuresh Kumar, national convenor of the National Alliance of People’s Movement (NAPM), the organization for people’s movement and struggle against injustice said that lathis used by the Madhya Pradesh police had nails in them and around 40 of the protestors had been injured.

He also said that a citizen’s basic right of filing an FIR was also denied to them.

Yogendra Yadav addressed the crowd, calling out to the government to follow the basic principle of a democracy—dialogue. He said on a satirical note: “Right now, we are demanding a dialogue. Right now we are not here saying no to the Narmada dam. Right now we are not even here demanding rehabilitation of the people, despite the shaky tin sheds that the government has given to those displaced. We aren’t worried if the Madhya Pradesh chief minister and other ministers want to conduct meetings in those tin sheds. Right now we demand the lowest we can ask for. In this democracy where some people are peacefully demanding their demands, isn’t it the responsibility of the government to at least try to talk to them? The chief minister had to declare on Twitter that his government is sensitive. What sensitivity or democracy is this where there is no place for communication or solution?”

That was enough to light another nationalistic spark, as somebody piped up from behind, shouting “Bharat Mata ki Jay”.

Yadav continued: “We only want dialogue. Bharat Mata resides not only on the borders (where trouble is commonplace) but also in the homes of those people you are adamant about wanting to destroy.”

A special leave petition was filed at the Supreme Court against a June 2017 order of the Madhya Pradesh High Court saying that the SC order asking the state to provide adequate cash package and basic amenities in the resettlement sites has not been complied with.

Both the petitions were listed for August 8 at the apex court where the Chief Justice of India, JS Khehar, did not agree to hear the petition, because another related case was pending before the MP High Court. The apex court has asked the petitioners to wait for the high court’s orders.

Hanan Mollah, one of the signatories of the petition said: “The place where rehabilitation is promised is on the slope of a hill. Say Rs 15 lakh is sanctioned for building homes for those displaced, in that area, about two-thirds, or Rs 10 lakh, would be spent on levelling the ground itself. What would be left for building homes? The government is continuously lying for 32 years. The government claims to have resettled families. If that is true, then show us the list. If the government won’t talk and kill people by water and bullets then who do we talk to?”