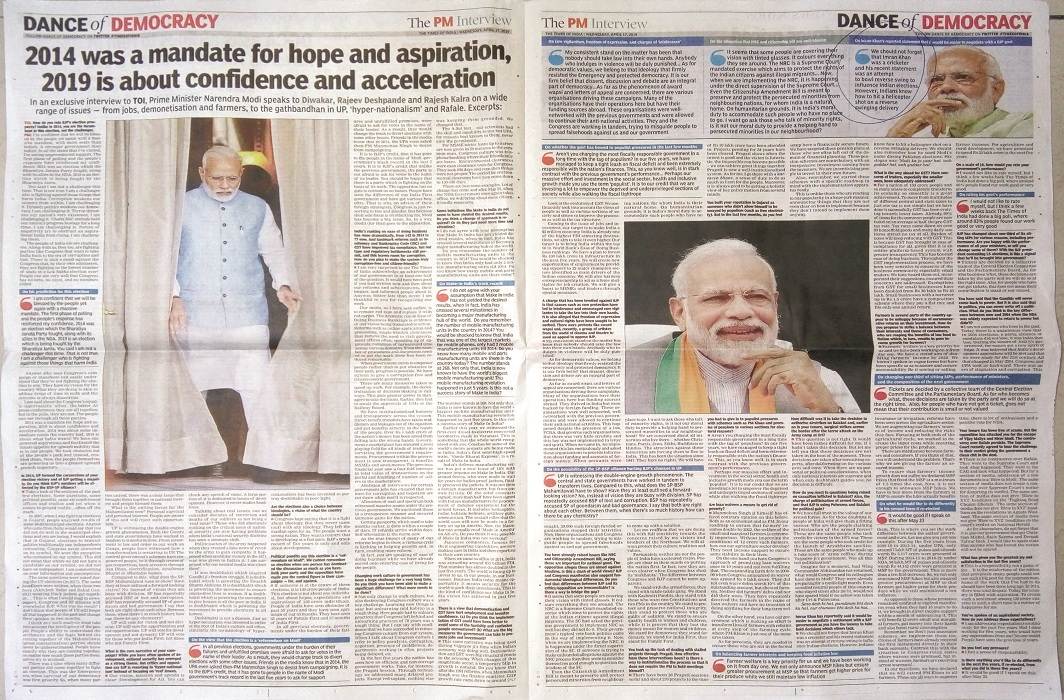 As predicted by this column last week (“sources say that more interviews, including in print, are in the offing”), the prime minister gave access to three senior reporters from The Times of India (TOI) for a lengthy interview which the paper splashed across a double spread on April 17. The timing was artfully picked—the eve of the second phase of the Lok Sabha elections. There were some tough questions but the PM had come well prepared and briefed. There was, however, one hitch as far as TOI was concerned. Thanks to EC strictures, it was not available on its online edition, which ranks number one in terms of viewership (The print edition has an audited circulation of 1.3 million while its website attracts close to 13 million unique visitors. Basically, only those who subscribed to TOI’s print paper could read the interview. On its website and e-paper, TOI has blanked out the PM’s interview with the line: “In view of the 48-hour silence period in force for the second phase of the LS elections on April 18, which applies to all forms of electronic media, the prime minister’s interview will be uploaded on this page once voting ends.” Being the leading national daily, TOI was doing the right thing but Modi’s more ardent supporters who are newspaper owners have no such qualms.

The Kannada daily Vijaya Vani also ran an interview with Modi on the same day. It is owned by former BJP MP Vijay Sankeshwar, and carried the interview on its website in clear violation of the Model Code of Conduct rules. The media outlet also owns a news channel where the interview was aired. Incidentally, voters in 14 of Karnataka’s 28 constituencies cast their ballots on April 18.

NDTV’s Prannoy Roy was spotted along with wife Radhika sprinting towards the departure gates at IG Airport, just managing to catch their flight. They were headed to Chennai as part of NDTV’s innovative focus on these elections; reporters cover the routine stuff while Roy racks up frequent flyer miles by travelling across the country interviewing those who matter, from chief ministers to opposition leaders. It is a winning strategy—his interviews and his analysis of the Tamil Nadu elections were as good as it gets. Additionally, no political VIP can turn down a request from Roy, more so after the release of his blockbuster book on Indian elections, The Verdict, and his professional standing in the media world. Roy’s coverage of the 2019 elections will be, therefore, even more keenly watched, and heard, especially since his channel flaunts election coverage as its USP.

NDTV’s keenly watched election debates will be missing a familiar face. Right in the midst of a make or break election, the prominent and popular television anchor—Vikram Chandra, NDTV’s former CEO, has withdrawn from all television-related activity, including anchoring shows. Chandra had launched his own digital video news enterprise called editorji almost a year ago but continued to anchor shows and conduct debates on the channel, while stepping down as CEO. Now, it seems he will be devoting all his energies to editorji which uses artificial intelligence (AI) algorithms alongside human inputs to deliver curated news content. It comes in the form of a Progressive Web App (PWA) and an online portal designed to serve bite-sized news videos across genres such as politics, international, local stories, sports, business, lifestyle, technology, and entertainment.

Under heavy pressure from TV and online news, the print media has finally come together to convince advertisers and readers of the benefits, value and importance of the printed word. After a series of high-level meetings, leading national newspapers have been carrying full-page advertisements which state “Print is Proof”. According to the campaign, sponsored by The Hindu Group, Hindustan Times, The Times of India, and Dainik Bhaskar, print is still the most reliable source of news.

The advertisement says: “If we don’t have the facts we don’t print the news but for social media, it’s sensation. And if a story doesn’t check out, it can always be deleted. As newspapers, we have no such luxury.” The first ad, which released last week, is part of a two-month-long campaign. The dailies believe that with the ocean of fake news circulating, it was the right time to jointly plug the printed word.