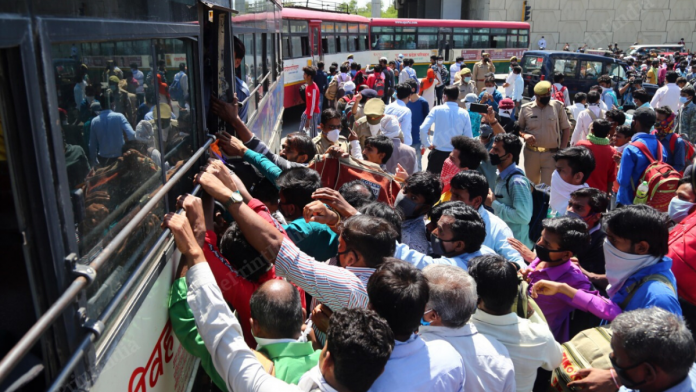 Ministry of Home Affairs while addressing the issue regarding movement of a large number of migrants taking place in some parts of the country so as to reach their home towns said it is violation of the the lockdown declared by the Prime Minister of India in view of Coronavirus (COVID-19) pandemic outbreak. Ministry of Home Affairs in its order directed State/Union Territory Government and State/Union Territory Authorities to ensure adequate arrangements of temporary shelters, and provision of food, etc. for the poor and needy people, including migrant labourers stranded due to lockdown measures in their respective states.

To deal with the situation and for effective implementation of the lockdown measures, and to mitigate the economic hardship of the migrant workers in exercise of the powers, conferred under Section 10(2)(I) of the Disaster Management Act 2005, the Chairman, National Executive Committee has further directed State/ Union Territory Governments and State/Union Territory Authorities to take necessary actions and to issue necessary orders to their respective District Magistrate/ Deputy Commissioner and Senior Superintendent of Police/ Superintendent of Police/ Deputy Commissioner of Police, to take actions.

It has also been directed that the migrants who have moved out to reach their home must be kept in nearest shelter by the respective State/Union Territory Government quarantine facilities after proper screening for a minimum period of 14 days according to the standard health protocol.

All the employers of businesses including Industry, Shops and Commercial Establishments are directed to make payment of wages of their workers, at their work place on the due date without any deduction for the period their businesses are under closure during the lockdown.

Landlords are directed to waive the payment of rent for one month from the workers including the migrants. However, this has also been directed that landlord forcing laborers and students to vacate their premises will be liable for action under Disaster Management Act, 2005.

The order also specifically mentions that in case of violation of the measures mentioned above, the respective State/ Union Territory Government shall take necessary action under the Disaster Management Act, 2005 and the District Magistrate/ Deputy Commissioner and Senior Superintendent of Police/ Superintendent of Police/ Deputy Commissioner of Police will be personally held liable for the implementation of the mentioned directions and lockdown measures.