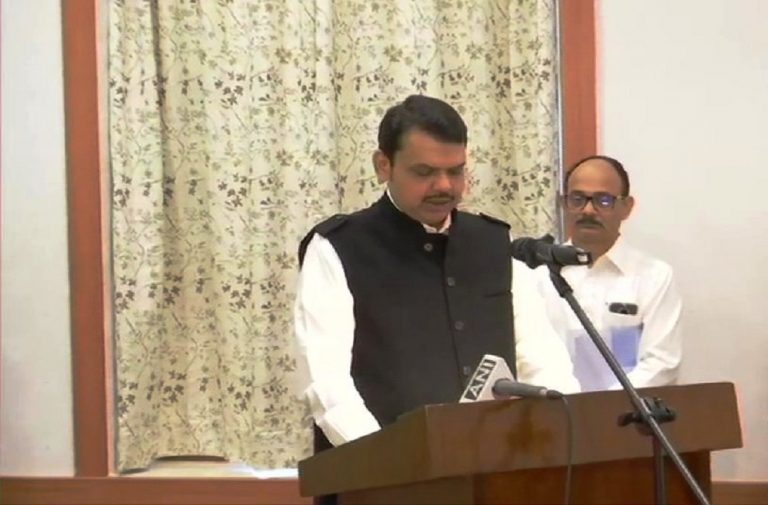 In a stunning Saturday surprise, the country woke up to visuals of BJP leader Devendra Fadnavis taking oath as the next chief minister of the state and Nationalist Congress Party (NCP)’s Ajit Pawar as his deputy being played out on their cellphones and news channels.

“Maharashtra needed a stable government, not a khichidi shaasan (mishmash government),” Devendra Fadnavis said after taking oath for the second time as the chief minister.

He targeted the Shiv Sena for insulting the voters and thanked NCP and Ajit Pawar for helping the BJP in government formation.

Devendra Fadnavis has to prove his majority by November 29, reports suggest.

The 8 am event at the Raj Bhawan in Mumbai was followed by a quick tweet by Prime Minister Narendra Modi.

“Congratulations to @Dev_Fadnavis Ji and @AjitPawarSpeaks Ji on taking oath as the CM and Deputy CM of Maharashtra respectively. I am confident they will work diligently for the bright future of Maharashtra,” PM Modi tweeted.

A shell-shocked Shiv Sena, which was all geared up to install party chief Uddhav Thackeray in the Chief Minister’s chair, with the help of the NCP and the Congress, accused NCP leader Ajit Pawar of “stabbing it in the back” after his uncle Sharad Pawar claimed he was unaware about the rebellion brewing in the his party.

After taking oath as the Deputy Chief Minister, Ajit Pawar told reporters: “From the day the results were announced to this day…. no party was able to form the government. Maharashtra was facing many issues, including farmer issues. So we decided to form a stable government.”

The developments came just hours after Sharad Pawar announced that the new Maharashtra government would be led by Shiv Sena chief Uddhav Thackeray with support from his party and the Congress, which was initially reluctant about the alliance but later decided to go ahead with the collaboration.

“It is Ajit’s personal decision and not one endorsed by the party. I came to know about only in the morning. I will speak elaborately at the press conference,” the NCP chief said.

Earlier this week, Sharad Pawar had met PM Modi over the agrarian crisis in Maharashtra, but the 45-minute meeting triggered massive speculation. Before that, PM Modi had praised the NCP for its conduct during a discussion in parliament on Monday.

Meanwhile, Uddhav Thackeray and Sharad Pawar will jointly address the media this noon in Mumbai.

Congress leader Abhishek Manu Singhvi blamed his party for its delay in extending support to the Shiv Sena and the NCP to form the government in Maharashtra.

“Surreal what I read abt #Maharashtra. Thought it was fake news. Candidly &personally speaking, our tripartite negotiations shd not have gone on for more than 3 days…took too long. Window given was grabbed by fast movers,” Abhishek Singhvi wrote.