It has been alleged that the lifespan of these aircraft may have exceeded 50 years, but even today an upgraded MiG-21 can hit any modern aircraft in the sky. 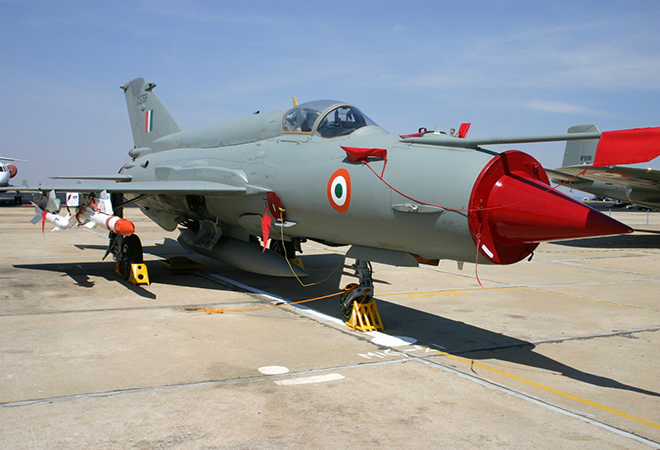 A representation has been made to Prime Minister Narendra Modi by advocate Satyam Singh and others requesting him to ensure the Indian Air Force discontinue flying MiG-21 aircraft.

MiG fighter aircraft have been the backbone of the IAF for the last 50 years. And the IAF has got more than 850 MiG fighters since 1960. Not only this, these aircraft have played a decisive role in the 1965 India-Pakistan war, the 1971 war, and the 1999 Kargil war, said the representation.

It has been alleged that the lifespan of these aircraft may have exceeded 50 years, but even today an upgraded MiG-21 can hit any modern aircraft in the sky.

The proof of this has been seen in 2019 when Wing Commander Abhinandan Varthaman shot down Pakistan’s fifth-generation F-16 with a MiG-21 Bison. Though the fighting ability of these MiG aircraft is unmatchable, its safety record is not very good.

More than 400 MiG-21s have been involved in accidents that have claimed the lives of 200 pilots during the last six decades, earning the jets ominous epithets such as “Flying Coffin” and “Widow Maker” , the email reads.

Experts say that more MiG-21s have crashed than any other fighter because they formed the bulk of the fighter aircraft in the IAF’s inventory for a long time. IAF had to keep its MiG-21 fleet flying longer than it would have liked because of delay in the induction of new fighters.

The representation said the MiG-21 (Mikoyan-Gurevich), whose NATO reporting name is ‘Fishbed’, was designed as a supersonic jet interceptor aircraft by Mikoyan-Gurevich Design Bureau (OKB) of the erstwhile Soviet Union. The aircraft, which made its maiden flight on June 16, 1955, holds the record of being the most produced supersonic jet in aviation history. The MiG-21 has had a long production run from 1959 to 1985 and underwent updates and modification thereafter in many countries including India. The first single -engine MiG 21 aircraft came into the IAF in 1963 and since then a total of 874 of them have been inducted, including various variants.

The Soviet-origin supersonic fighters had become the mainstay of the IAF over the years, because of sheer numbers, even as the Air Force got more modern aircraft like the Mirages and others. The aircraft first underwent an upgrade in 1970s and the variant was known as the MiG-21 Bis. With the Light Combact Aircraft Tejas, nowhere in the horizon, the IAF decided to upgrade 125 of the MiG-21 Bis to MiG-21 Bison in 2000, despite a spate of crashes in the 1990s that claimed lives of many pilots.

According to the database of Bharat Rakshak, an aviation website which works closely with the IAF, 290 pilots have lost their life till now in accidents of MiG-21, the representation says.

The aircraft is a single-engine plane, which means it is always under threat. The chance of a plane crash increases when a bird collides or the engine fails.

In October 2014, the IAF chief said that India’s security is threatened by the delay in removing the old aircraft, because some part of the fleet is out of date. Experts believe that the absence of any more fighter jets in the IAF for a long time is also one of the reason for the accidents. For a long time, with the inclusion of no new fighter jets in the Air Force, the entire weight is on the MiG-21.

The crash of a MiG-21 Bison in the early hours of Friday, which killed Squadron Leader Abhinav Choudhary, has once again led to questions on the safety that have dogged Soviet-era aircraft for decades now. Just this year alone, there have been three accidents involving the MiG-21 Bison, which was supposed to be replaced by the Tejas.

In 2012, former Defence Minister A.K. Antony had said in Parliament that more than half of the 872 MIG aircraft purchased from Russia had crashed. Due to which, more than 200 persons, including 171 pilots, 39 civilians, and 8 other services people, had lost their lives.

Read Also: Allahabad HC to hear plea against use of loud speakers in places of worship

There is a widespread demand to phase out MiG -21 which has clearly outlived its utility. According to an IndiaSpend report, the MiG aircraft, which joined the IAF in the 1960s, completed their retirement period in the mid-1990s. It is interesting to know that in 1985, Russia removed the aircraft from service, after which Bangladesh and Afghanistan have also removed it from service, the representation reads.

Did you find apk for android? You can find new Free Android Games and apps.
Share
Facebook
Twitter
Pinterest
WhatsApp
Previous articleAllahabad HC to hear plea against use of loud speakers in places of worship
Next articleDelhi High Court transfers plea against Covid test advisory to its division bench