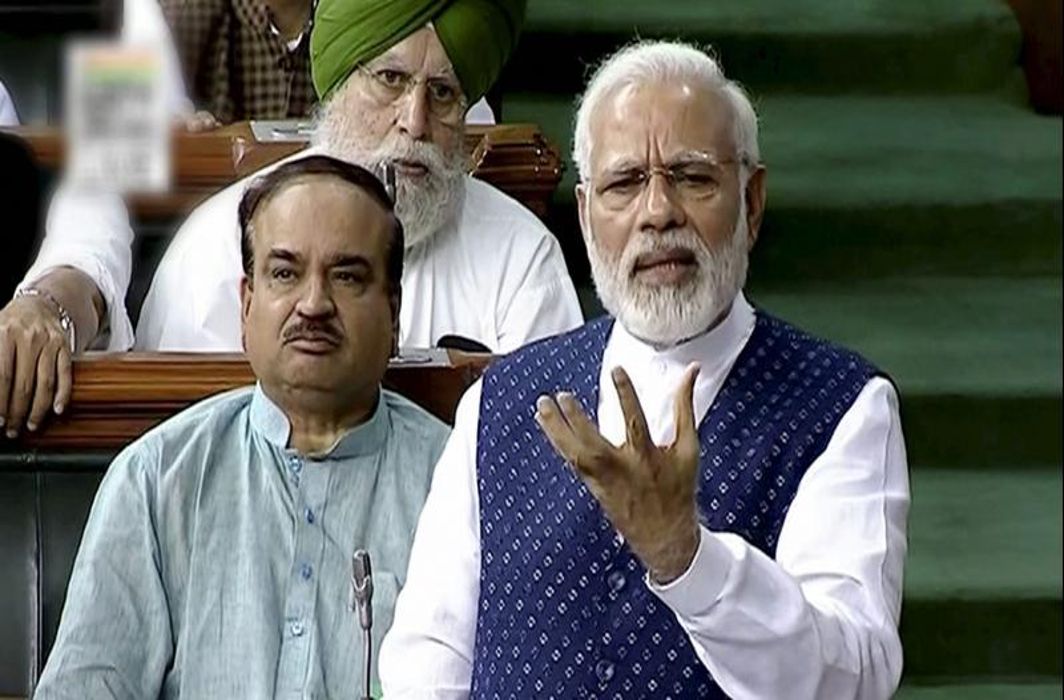 A veiled attack on Mahatma Gandhi without naming him, blaming Nehru for Partition and attributing much of what is wrong in the country to Congress rule marked Prime Minister Narendra Modi‘s 90 minute speech in reply to the motion of thanks to President’s address in Parliament on Wednesday, January 7.

He later moved on make claims of achievements under his government terming them, typically, ‘unprecedented’.

Amid constant sloganeering by the opposition of ‘jhutha bhashan bandh karo’ and ‘jhuthe ashwasan bandh karo’ (stop telling lies in speech and stop giving false assurances), Modi started by saying that the President’s speech does not belong to any one party. The Presidential address should be respected and it should not be opposed just for the sake of opposition, he said.

In what was more of a ‘campaign speech’, as later alleged by Congress president Rahul Gandhi, Modi began his speech by directly blaming the Nehru-Gandhi family for Partition.

“This is the same party that divided India. For decades, one party devoted all their energies in singing paeans to one family. The interests of the nation were over-looked just for the interests of one family,” he said.

“To this day, 125 crore Indians are paying the price for your sins, you divided India keeping elections in mind, you closed Parliament’s doors without heeding the people’s wishes, the seeds you sowed at that time, its ramifications are being felt to this day. Not a single day has passed when the country has not suffered due to poison sowed by you,” Modi alleged.

He accused the Congress for brainwashing people into thinking the Congress, especially Jawaharlal Nehru, brought democracy to India. He said that democracy “is in the blood of Indians” and cited the golden age of Lichchavi rule in eastern India and of Kannada social reformer Basava’s teachings.

“It is the country’s misfortune that Congress leaders feel ‘Bharat’ the country was born on August 15, 1947, as if there was no country before this. I’m shocked, do I call it ignorance, or lack of understanding, when it is said Nehru and the Congress gave India democracy,” he said.

Modi asked, “How did the Congress act in Kerala, how did they treat the Akali Dal in Punjab, how did they behave in Tamil Nadu? Why did Congress dismiss so many state governments at their will? This is no commitment to democracy.”

Referring to Karnataka Congress MP Mallikarjun Kharge’s speech in Parliament, Modi said: “Kharge ji aren’t you from Karnataka, at least remember Basava. You should know him, he established the Anubhav Mandap in the 12th century. Everything he did was done democratically and women’s empowerment was his top priority, this was democracy in India in the 12th century. Have you forgotten that, Kharge ji?”

The reference to Karnataka was significant in view of the upcoming assembly polls in the state. Next was Andhra Pradesh, where the BJP ally TDP has been miffed with it after the Union Budget 2018.

Modi said the TDP was born due to humiliation of Andhra leaders like Neelam Sanjeeva Reddy by Congress. He alleged that former Congress PM Rajiv Gandhi insulted a Congress CM at Hyderabad airport and “stabbed in the back the party’s own Presidential choice” Reddy.

“NT Rama Rao’s Telugu Desam Party was born out of those insults to the people of Andhra Pradesh,” said Modi, using it to underscore his point about the Congress being undemocratic though claiming to have brought democracy to India.

“We cannot forget how the Congress insulted Shri Neelam Sanjiva Reddy, a proud son of Andhra Pradesh. They humiliated him. Nobody in India needs lessons on democracy from the Congress Party,” said Modi.

The PM also had words about what he said is the lack of democracy within the Congress party. He claimed that “out of 15 Congress committees, 12 had voted for Sardar Patel while three had rejected both”, yet Jawaharlal Nehru was made the Prime Minister, at the time of Independence.He also claimed India wouldn’t have lost what is now Pakistan-occupied-Kashmir if Patel has been made Prime Minister.

This was a veiled reference to Mahatma Gandhi, who had preferred Nehru for the post of prime minister since he was more acceptable and preferred leader for a secular India for which Kashmir had opted. Patel, who himself – along with most other leaders – was in agreement with this choice, was also old and passed away even before the first elections were held.

Having said that, the PM also went on to cite the Congress party’s recent internal elections as an example of what he claimed is the lack of democracy in the grand old party – a malady ailing almost every India political party, including the BJP where the leader going to be ‘elected’ as chief is decided by RSS and is known beforehand.

Modi said: “In December, did we witness an ‘election’ or a coronation for the post of Congress president? One youngster raised his voice about this as well, but he was ignored.” He was alluding to a minor revolt by one Shehzad Poonawalla.

“The NDA Government has changed the work culture in the nation. Projects are not only thought about well but also executed in a timely manner,” said the PM.

He also claimed that his government is building more roads and a faster rate than the previous one – a claim that had been proved false earlier by some websites such as Alt News which did a fact check.

Further, he said, “Since Kharge Ji spoke about railways and Karnataka, let me tell the truth about the Bidar-Kalburgi rail line. The project was approved by the Vajpayee Government and from 2004 till 2013 nothing was done. It is when a government under BSY/BJP gave approvals work could begin,” referring to BJP leader and former Karnataka CM BS Yeddyurappa (BSY).

He said that it was his government that got work done while Congress only laid foundation stones. He mentioned the example of the Barmer refinery to demonstrate his point. “The way people of Rajasthan were misled about the Barmer refinery was appalling. Just for votes, lies were said. It is in the last three years that the government of India and the Rajasthan government worked together to sort out the pending issues,” he claimed. Rajasthan has a BJP government currently.