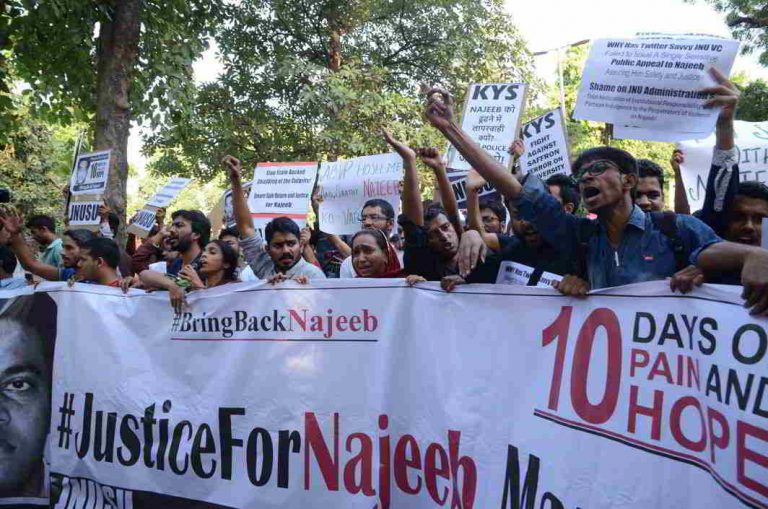 CBI told Delhi High Court on Friday (May 11) that the case of disappearance of Najeeb Ahmed missing since October 2016 so far — is a case of missing person only — as they have no evidence to show a crime was committed. They also informed Delhi HC that they have announced an award of Rs 10 lakh to anyone providing clues about Ahmed. In addition the agency also sought the assistance of the Interpol for issuing a yellow notice to ascertain his whereabouts, CBI said.

CBI while citing 8th status report informed the bench of Justices S Muralidhar and I S Mehta that they have interrogated 28 students and 25 Security guards/supervisors of JNU, in connection with the disappearance of Ahmed, despite all their efforts they are yet to ascertain the whereabouts of Ahmed, a student of M Sc Biotechnology, who went missing from Mahi-Mandvi hostel of JNU on 15 October 2016, following the scuffle with students belonging to Akhil Bharatiya Vidyarthi Parishad (ABVP).

CBI counsel Nikhil Goel informed the court that they don’t have ‘an iota of evidence’ to arrest or to take any action against those nine students whose phones have been sent to IFSL, Chandigarh for forensic examination. He said data from the mobile phones is now available with the CBI and the work of analysing the exhaustive data is in progress. But, they are yet to find a concrete leads in respect of those nine students specifically named by the Fatima Nafees, mother of Najeeb Ahmed. He further said to the court they are not even sure if the crime has been committed. The agency in its status report said to the court that out of nine mobile phones, three could not be analysed as one of them was not unlocked, protected with pattern lock and two of them are not in working order.

He said they will be sending these three mobile phones to CFSL Hyderabad for examination within three days. Taking a note of the submissions, bench directed to send these phones expeditiously to the CFSL lab Hyderabad. The court request CFSL to examine the phones and to make every effort to retrieve the data therein and submit a report to CBI within one month and not thereafter.

On Friday, during the hearing, Senior Counsel for petitioner said that the petitioner (Fatima Nafees, mother of Najeeb Ahmed) is utterly frustrated with the failed attempts of the CBI to trace her son and has lost faith in the CBI. He further urged the court should itself peruse the statements said to have been recorded by the CBI since it took over the investigations and in particular examine whether the locations and movements of the nine students, named by her, after the date her son went missing, were examined. He also sought Rs 10,000 from the court for every hearing to petitioner Fatima Nafees as she has to travel from Badaun, UP.

Apart from that he also sought that the task of analyzing CBI record be entrusted to a former judge for better assistance. Bench said it will take up this issue on the next date of hearing, July 12, 2018.