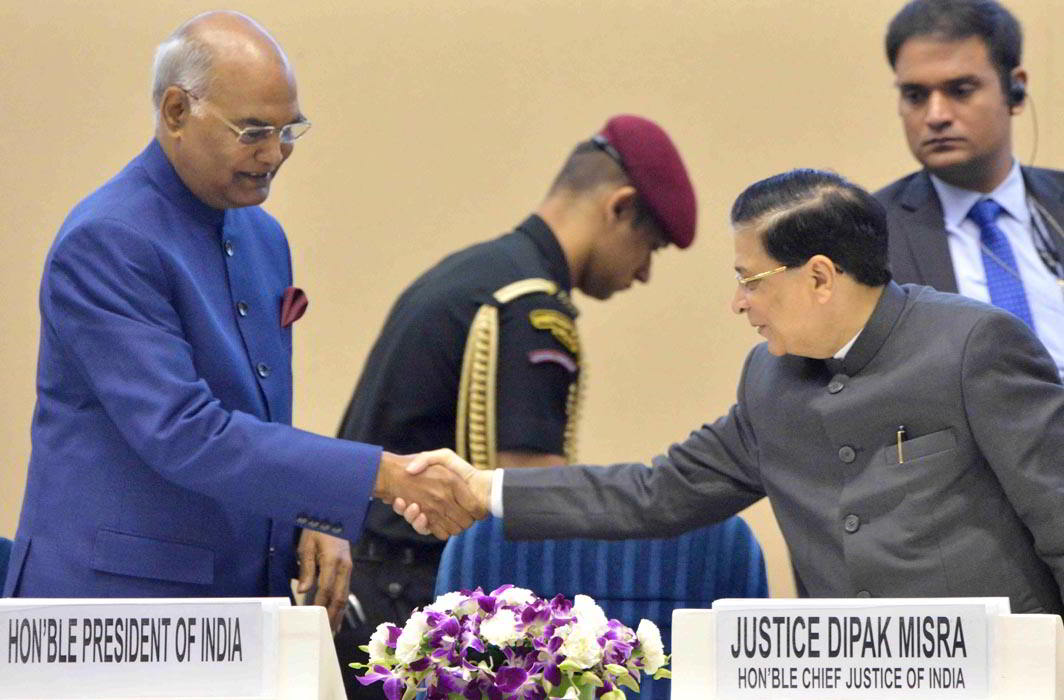 Above: (Left) President  Ram Nath Kovind being received by Chief Justice of India  Dipak Mishra at the inaugural function of  the National Law Day. Photo: UNI

The judiciary-executive tussle came to the forefront during the two-day National Law Day celebrations at Vigyan Bhavan on Saturday and Sunday (November 25-26).

While Chief Justice Dipak Misra handled the issue carefully, saying on the first day: “There is a perception that there is a judicial activism… I must clarify protection of fundamental rights of each and every citizen is the sacrosanct duty of judiciary which has been conferred on by the Constitution. Fundamental rights have been expended from the date of constitution came into existence.”

He also clarified the so-called judiciary-executive clash, by stating: “Nobody intends, nobody desires to enter upon the policy making areas. We don’t make policies but we interpret policies and that’s our job.” Clarifying further, he said that the main task of the three wings of the state is to defend the Constitution, its values, morals and philosophy.

This was a direct confrontation of the power of the judiciary.

The Chief Justice was, again, careful in choosing his words while responding to the Union minister. He said: “The Prime Minister is the repository of constitutional trust… Trust is reposed in the Prime Minister. That is the language of the Constituent Assembly and we are not going to add anything. We also repose the same trust in the Honourable Prime Minister.”

The executive’s wings had been clipped by the judiciary, through the striking down of Article 124A of the Constitution which had allowed the Law Minister to be an ex-officio member of the NJAC and the Prime Minister as part of the three-member panel which nominated the two eminent persons to the NJAC. That would have given the politicians a considerable say in the appointment of judges of the Supreme Court and High Courts.

With Prime Minister Narendra Modi watching, Justice Misra said: “Many things we have accepted with mutual respect. We are absolutely conscious where we can intervene and where we cannot. One institution should not claim supremacy over the other.”

Hitting somewhat below the belt, Prasad also brought up the case of jailed Calcutta High Court judge C S Karnan, saying that was an example of the failure of the Supreme Court Collegium. He said, to the astonishment of the august gathering: “The Supreme Court sent a sitting judge (Karnan) to jail for contempt. He was an appointee of the Collegium. When I went through the records, I found to my dismay that the then Collegium had found him well-versed in all branches of law… Obviously, he was not well-versed in contempt law.”

The bombshell comment case when the minister said that the Karnan contempt case should be a good reason for the Collegium to do an “audit” of its performance.

He said there should be no interference.

Meanwhile, at APN News Channel’s widely followed debate ‘Mudda’, Justice RB Misra, ex-Acting Chief Justice of Himachal Pradesh High Court, said: “The constitution specifies that the judiciary and the executive should be separate, and when their paths cross, then the final arbiter will be the courts.”

He said: “Relationships are based on trust. There is nothing wrong in deliberations. Also, we can’t say which system is foolproof.”