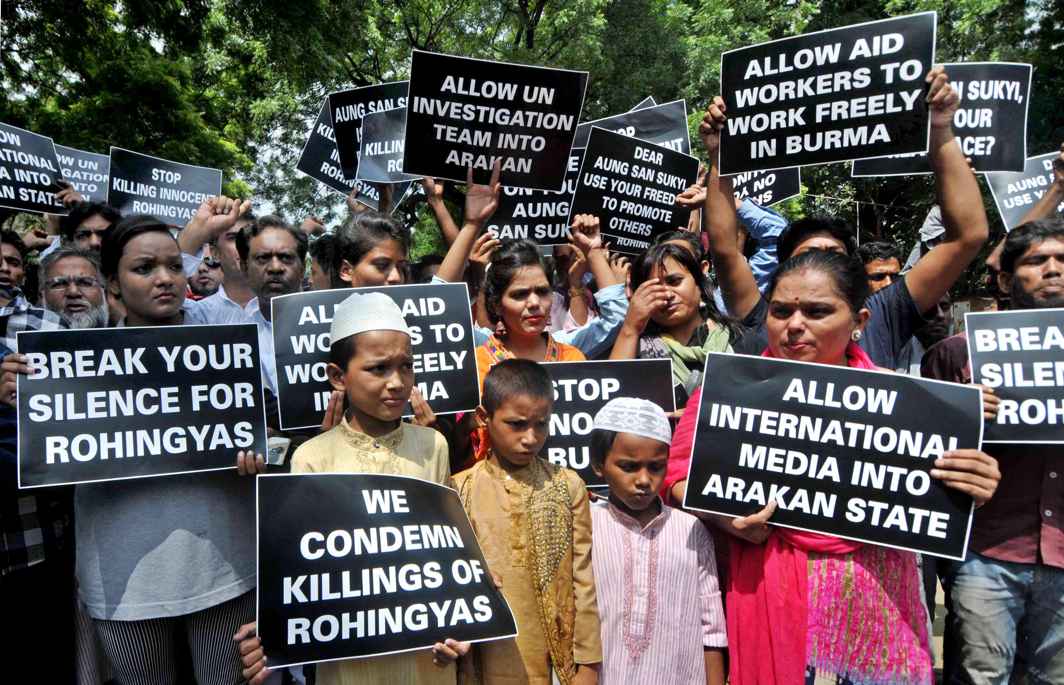 Above: Rohingya Muslim refugees along with Indian supporters hold placards against human rights violations in Myanmar during a protest in New Delhi (file picture).

Amid a global outrage over the continued persecution of Rohingya Muslims by the Myanmar establishment, the Centre, on Thursday (September 14), told the Supreme Court that it cannot allow the illegal immigrants from Rakhine State to stay in India as refugees as they pose a threat to national security.

The Union home ministry which filed an affidavit on the Rohingya issue in the Supreme Court on Thursday (September 14), has reportedly said that refugees of Myanmar’s ethnic minority group who are settled in scattered camps across India could be used by domestic and foreign terror groups to foment trouble in the country.

The affidavit, it is learnt, claims that inputs received from various Indian intelligence agencies suggest that at least some Rohingyas living in India have links with terror groups. The Centre claimed Rohingya militant groups are active in Jammu, Delhi, Hyderabad and Mewat (in Haryana), and could be used by the ISIS.

However, no evidence of this claim has been provided in the home ministry’s affidavit, which adds “National interest warrants their (Rohingyas) deportation. No illegal immigrant has the right to stay in India.”

The affidavit has been submitted before the bench of Chief Justice Dipak Misra and Justices AM Khanwilkar and DY Chandrachud, which is presiding over proceedings on a bunch of public interest litigations and intervener petitions that have either sought deportation of the Rohingya Muslims or for directions to the Union government to provide a safe haven to these refugees.

Next week, the Supreme Court is scheduled to hear a plea filed by two Rohingya immigrants, Mohammad Salimullah and Mohammad Shaqir, challenging the Indian government’s decision to deport illegal Rohingya Muslim immigrants back to Myanmar.

The plea, filed by advocate Prashant Bhushan on behalf of the two, claims that Salimullah and Shaqir had taken refuge in India after escaping from Myanmar due to widespread discrimination, violence and bloodshed against the community there.