National Webinar on the Theme “Stand up for Human Rights: The Need of Global Solidarity” organised today by St. Thomas College of Law 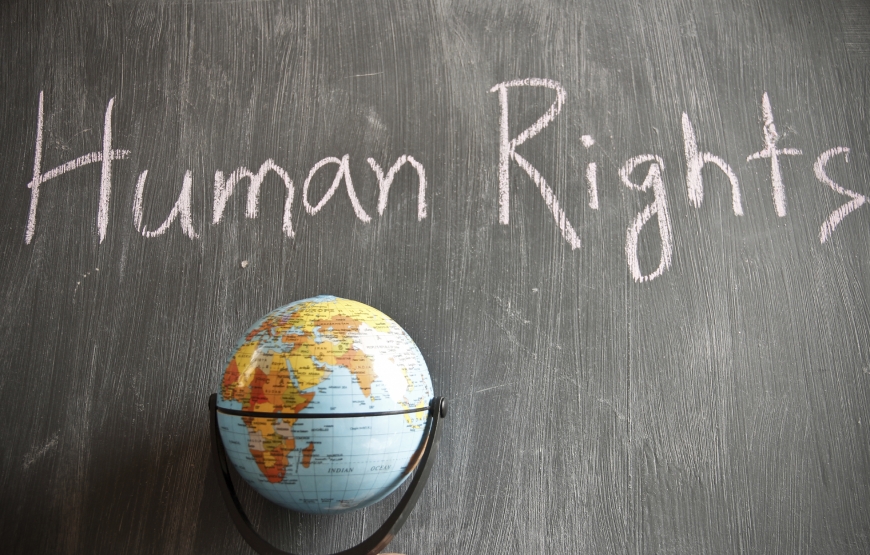 A National Webinar on the Theme “Stand up for Human Rights: The Need of Global Solidarity” was organised on Wednesday by St. Thomas College of Law, Greater Noida. The webinar was presided over and addressed by Supreme Court Justice Indira Banerjee, Gauhati High Court Chief Justice Kotiswer Singh, Senior Advocate Pradeep Rai, Advocate Romy Chako amongst other legal luminaries.

Supreme Court AOR Sneha Kalita addressed the webinar and stated that in the present times, there is a need to work in solidarity to ensure the well being of everyone. The pandemic was an unexpected crisis, and Covid19 has attacked the entire mankind without any distinction on any basis. Its a testing time for everyone to work for the society in any way they can. Though Universal Declaration of Human Rights is not mandatory, it has influenced many countries. Human rights and its protection should be included in student’s curriculum so they are informed.

Supreme Court Justice Indira Banerjee commenced her address saying that it gives her immense pleasure to participate in the webinar for a special reason, as she used to appear as lawyer for North India Churches in Calcutta, when Bishop Raju headed the Church of North India. She had the opportunity to start her career with blessing of the Almighty and others who were providing their service in those Churches.

Justice Banerjee stated that Human rights are rights basic rights of any society, inalienable rights irrespective of any race caste or other distinctions. Its different because it cannot be disposed of by any incident, and its inherent in every person by virtue of being a human being. The concept of human rights isn’t very new, and even though the General Assembly of UN had adopted UDHR years back, but human rights can be traced back to many many years ago. Human rights have also been found in Greek Theory of Natural Laws, natural laws are considered at a higher level than state laws.

According to Justice Banerjee, Individuals have a collective responsibility to ensure that there is no human rights violation. The Covid has violated human rights in more ways than one, as lot of people have fallen ill and have died, and there has been a problem of migrant workers who had to walk hundreds of kilometres. Controlling covid, including developing a vaccination requires collective effort, and not efforts from just one country. It also needs to be ensured that there is equitable distribution and the benefit of vaccine isn’t taken by just some people.

Gauhati HC Justice Koteswar Singh stated that UDHR is the very document that incapsulates aspirations of human beings. Democracy is a living experience it’s not a big practice. In reflecting the true sprit of democracy, we must Secure citizens Equal opportunity and Dignity as an individual. Our destiny is bound with each other  and Collective efforts are required.

Where the mind is without fear

and the head is held high,

where knowledge is free.

Where the world has not been broken up into fragments by narrow domestic walls. Where words come out from the depth of truth,

where tireless striving stretches its arms toward perfection.

Where the clear stream of reason has not lost its way

into the dreary desert sand of dead habit.

Where the mind is led forward by thee

into ever widening thought and action.

In to that heaven of freedom, my father,

Senior Advocate Pradeep Rai stated that the concept and scope of human rights has been increased. In Covid time,there were several people who could not even get access to basic healthcare.  Health, right to information, free speech and environmental issues all need to be dealt with. Even in running a business, unless you are going equal opportunities its not possible to be successful. When you approach a system, and that system is friendly with you, there you have opportunity of growth. Fundamental rights and human rights need to be globalised, and all the countries should give you equal opportunity. We should get equal opportunity not only in terms of health, education but privacy, etc also need to be honoured.

Mr. Rai added that Right to privacy also needs to be respected, laws against phone tapping, etc are important to respect a person’s privacy. Development needs to be achieved globally in terms of right to privacy, information, education.

He concluded by saying that Human rights are inalienable, that existed prior to constitution. As long as constitution is not suspended, Courts need to come out in rescue of the citizens and protect their rights.