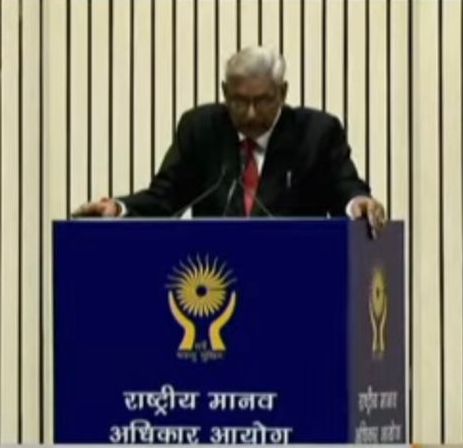 Addressing the NHRC Foundation Day programme, (Retd) Justice Mishra said, “Justice and peace complement each other and our law and order is based on this. Achievement of quick justice, a fundamental right of human beings, is still a dream today. The truth is that the costs of litigation are out of reach. The police investigation system needs to be made more effective and independent. This system should be such that there is no need for investigation by CBI.

Talking about the condition of jail inmates, he said yoga, meditation and lectures should be given on a regular basis to improve the criminal attitude of prisoners, who also have the right to dignity. The commission investigates every custodial death to ensure that it is not caused by any excess. The ‘encounter’ by the police under the guise of ‘instant justice’ and ‘provocation’ for this is an unconstitutional and condemnable act. We have to try to get rid of this barbarism, he added.

Welcoming Prime Minister Narendra Modi and Home Minister Amit Shah to the programme, (Retd) Justice Mishra said, “We are celebrating ‘Amrit Mahotsav’ to commemorate the 75th anniversary of our independence. Today, India has emerged as a power on the global stage and it has been recognized as a new force, the credit of which goes to the citizens of India, the constitutional system of the country and the leadership of the country.

Talking about Mr Shah, he said “Your tireless efforts have ushered in a new era of peace and law and order in Jammu and Kashmir and North-East. One-sixth of the world’s population resides in India, it is undoubtedly a very difficult task to run such a large democratic system, yet our democratic system solves every problem in a peaceful and equitable way. I express my heartfelt thanks to our Prime Minister, Home Minister and all concerned who have contributed to the great achievements of India.

“We can proudly say that India is a leader in the protection and promotion of human rights. Many schemes related to public welfare have been implemented in our country, which have given a new dimension to the protection of human life and values. The National Human Rights Commission has been functioning in India for the past 28 years, whereas in many other superpower nations, such institutions are yet to be established,” he added.

(Retd) Justice Mishra further said that the concept of values ​​and rights of human dignity are contained in Vedic literature, which gives insight into the Indian philosophy of life and the culture of this country.

“We consider women to be the incarnation of ‘Shakti’, ‘Durga Puja’ is a proof of this. Our culture is sensitive to the protection of ‘nature,’ which is essential for human life. We worship the various forms of nature like life-giving rivers are prayed as mothers. We consider all animals and plants as our brother and sisters, even the ‘moon’ is regarded as an elder relative,” added the NHRC chief.

He said, “In our country, there is equality of all religions, there is freedom to build temples, mosques, churches, whereas in many other countries, such freedom is not provided. Man is intent on destroying humanity. Around 120 million people died in the world in the 20th century due to political violence. It is unfortunate that the political violence in the country and abroad has not ended even today. Killers of innocent people cannot be glorified. It is unfair to call such pseudo terrorists as freedom fighters.”

He urged social organisations and human rights defenders to strongly condemn political violence and terrorism, as indifference in this regard will give rise to fundamentalism. “History will never forgive us for this. The time has come, when we will have to resist it firmly, at least we have to raise our voice against this violence,” he added.

(Retd) Justice Mishra said, “At present, the young and brave communities of the nation are being misled by the drug mafia. This decline of youth power of the nation is very worrying, has the rehabilitation of the victims become our destiny? “Our country has been given ‘freedom’ of press, media and cyber space, which is subject to the discharge of constitutional and humanitarian obligations,” he added.

Speaking about the third pillar of democracy, (Retd) Justice Mishra said, “No one has the freedom, nor should this freedom be given to anyone to destroy the dignity of the Court, the basic pillar of the Republic, by contemptuous conduct. It has become common practice to accuse India of human rights violations by external forces. Along with counteracting this, there is also a need for strong resistance to the efforts to completely destroy the ‘culture’ and the prevalent ‘languages’.”

He said the commission provides support in good governance. At the same time, it also cooperates as much as possible for the protection of human rights to the judiciary. Welfare schemes have been made to give shape to the Directive Principle of State Policy as mentioned in the Constitution. Therefore, it becomes necessary to implement them seriously and effectively by the states and bodies. In case of inaction and indifference, necessary ‘guidelines’ can be issued by the court for smooth implementation of these schemes.

The NHRC chief further said that the ‘Benefit of Reservation’ has not yet reached the last person of this ‘class’ row due to the usurp of the advanced ‘reserved class’. States should be at liberty to fix certain percentage of reservation out of the available reservation (to trickle down benefit) for the upliftment of this deprived community. Even today many communities in the reserved category are poor. Till their empowerment, reservation will be required.

He also talked about river Ganga, calling it the life-giving mother, on which the livelihood of a large population of the country depended. Timely completion of the ‘Namami Gange’ scheme is inevitable. ‘Yamuna’ is also on the verge of extinction like ‘Saraswati’. Pure water is necessary for health, for the disposal of garbage and its treatment, successful implementation of Swachh Bharat-II scheme is required, noted the NHRC chief.

He also talked about global warming turning into a ‘serious’ issue. It is necessary to improve the ‘environment’ at the ‘local’ level. “We have to think globally and act locally. Mining in Antarctica is threatening the climate. We are the custodians of the ‘planet of the earth’, so it is our duty to preserve it safely for the future generations, otherwise the coming generation will never forgive us,” warned the former Supreme Court Judge.

He said online education is being relied upon during the Covid-19 pandemic, but this facility is not available to everyone. E-commerce has also created inequality. Online business is flourishing at the cost of cessation of livelihood of small vendors. In this era, it is necessary to create such a supply chain in which all the traders get proportionate profit. It is necessary to make life-saving medicines available to the poor at reasonable prices.

He said the storm of expensive foreign ‘brands’ is adversely affecting the quality of Indian production and the manpower working in it. The need of the hour is that the judiciary and other stakeholders should consider how, keeping in view the benefits of globalisation, the adverse impact on the economic system of the country can be avoided.

According to the NHRC chief, more than 20 lakh cases related to human rights have been resolved by the commission so far and a compensation of Rs 205 crore has been recommended. The Commission has developed an effective online grievance management system. It has issued 22 advisories on various topics related to the availability and accessibility of food distribution in remote areas. The commission is also making efforts to improve the condition of orphanages and hostels.

The effort of the Commission is to fulfil the basic spirit of its logo, which indicates that the rays of the Sun are a symbol of hope and speed. The Commission wishes to benefit everyone without any discrimination. By doing so, it is giving a message of universal love and hope, which is a fundamental right of humanity, he added.

Did you find apk for android? You can find new Free Android Games and apps.
Share
Facebook
Twitter
Pinterest
WhatsApp
Previous articlePunjab and Haryana HC grants interim bail to Yuvraj Singh if he’s arrested in caste remark case
Next articleFarmers and the Right to Protest