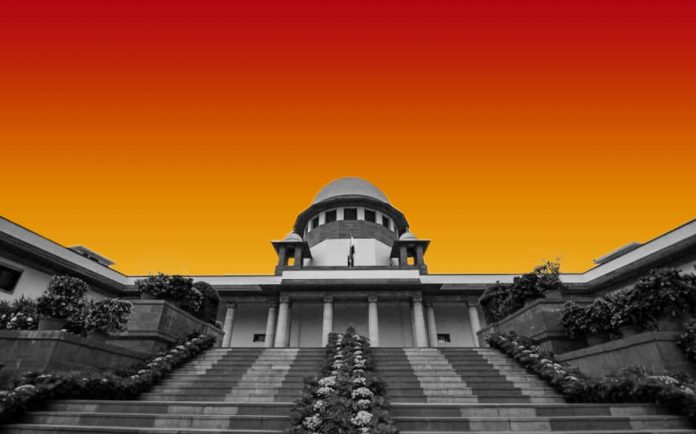 2021 was as striking a year as any other for the Supreme Court of India. However, the outgoing year saw the working of the courts hit by the second wave of Covid-19. Despite that, the Apex Court continued with virtual hearings and then physical hearings as things began to get better until Omicron came calling.

Here are some key cases the Apex Court heard and passed orders on.

The Supreme Court on January 12 stayed the implementation of the three farm laws which were passed by Parliament and approved by President Ram Nath Kovind last year. As per the verbal order, the implementation of the three laws have been stayed till further orders and a committee of agricultural economists would look into the laws and would talk to protesters and the government on this issue and apprise the Court.

The stay came in the wake of thousands of farmers from Punjab, Haryana and a few other states laying siege to the capital after their being disallowed to enter the capital. The bench of then Chief Justice S.A. Bobde, Justices A.S. Bopanna and V. Ramasubramanian also named the four-member committee.

The Supreme Court on October 27 constituted a committee headed by Justice (retired) R. V. Raveendran, former judge, Supreme Court of India, to prepare a report after a thorough inquiry into the Pegasus snooping scandal.

“In a democratic country governed by the rule of law, indiscriminate spying on individuals cannot be allowed except with sufficient statutory safeguards, by following the procedure established by law under the Constitution.”

Chief Justice N.V. Ramana said, “Of course, the Respondent-Union of India may decline to provide information when constitutional considerations exist, such as those pertaining to the security of the State.”

“However, this does not mean that the State gets a free pass every time the spectre of “national security” is raised. National security cannot be the bugbear that the judiciary shies away from, by virtue of its mere mentioning.”

The Supreme Court on November 12 directed the Centre to grant Permanent Commission to 11 women Short Service Commission officers within 10 days as per its previous orders. The Court passed the directions after a contempt plea was filed by women SSC officers who were not granted PC as per the judgment of March 25, 2021.

During the hearing, the Court warned the Centre that it would initiate contempt proceedings against the Indian Army for not following its previous orders for grant of Permanent Commission.

The Supreme Court on May 5 struck down as ultra vires, the sections granting reservation in the Maharashtra Socially and Educationally Backward Classes Act 2018 (SEBC Act). (Jaishri Laxmanrao Patil Vs The Chief Minister & Ors.)

The court said that no further benefit can be claimed by anyone. The bench was delivering its order on petitions challenging the same. As the five-judge constitution bench of Justices Ashok Bhushan, L. Nageswara Rao, S. Abdul Nazeer, Hemant Gupta, and S. Ravindra Bhat assembled, the court said that those who have been admitted in PG Medical courses till September 9, 2020 are safe and will not be impacted.

The Supreme Court on November 18 ruled that skin-to-skin contact is not essential for it to be a POCSO offence as held by Bombay High Court‘s Nagpur Bench.

The Apex Court’s three-judge bench of Justices U.U. Lalit, S. Ravindra Bhat and Bela M. Trivedi set aside the high court judgment saying the most important ingredient of constituting sexual assault is sexual intent and not skin-to-skin contact with the child.

The purpose of the law cannot be to allow the offender to escape the meshes of the law, the Apex Court said.

The Supreme Court on December 16 said the views of the people and those of experts needed to be called for by the Commission for Air Quality Management (CAQM) as part of long-term measures to overcome the perennial pollution problem especially during the winter months in Delhi and the National capital Region.

The Special Bench of Chief Justice of India (CJI) Justice N.V. Ramana, Justices D.Y. Chandrachud and Surya Kant was told by Solicitor General Tushar Mehta that the Centre would be taking a call on continuing ban on construction and other industries which were banned following the fall in air quality.

The Supreme Court on March 26 allowed the appeals of Tata Sons against the National Company Law Appellate Tribunal (NCLAT) order restoring Cyrus Mistry as the executive chairman of the group. The order is being cited as a victory for the Tatas.

The bench, comprising the then Chief Justice S.A. Bobde, Justices A.S. Bopanna and V. Ramasubramanian, thus backed the removal of Mistry by Tata Sons in October 2016 and said it was the right decision. CJI Bobde said,

“All questions of the law are favourable in respect of the Tata Group. All the applications filed by the Tata Group are allowed. We cannot adjudicate on the part of fair compensation. All appeals are allowed and the order of the NCLAT is set aside.”

The Supreme Court on July 15 issued notice on a petition challenging the constitutional validity of Section 124A of the Indian Penal Code, stating that such laws posed a serious threat to the functioning of the administration, as well as individuals.

A three-judge bench of Chief Justice of India N.V. Ramana, Justice A.S. Bopanna and Justice Hrishikesh Roy said, “Suppose some particular party doesn’t want the other party, they may use these types of laws. It is a serious threat to the functioning of the administration, as well as individuals. Let us see we will examine all these matters and we’ll keep it at one place.”

The Supreme Court on December 14 approved the Chardham project where the Apex Court accepted the demand of the Centre to widen the roads being built for all-weather route by 10 metres. The Apex Court also formed an oversight committee for environmental concerns, which will be headed by Justice (retired) A.K. Sikri, a former judge of the Supreme Court.

The bench of Justice D.Y. Chandrachud, Justice Surya Kant, and Justice Vikram Nath has allowed the construction of the wider roads considering the demand of the Centre to amend the order dated September 8, 2020. In the order, the Ministry of Road Transport and Highways was ordered to follow the rule of building a 10-metre corridor on the highway connected with the project which connects to the border with China.

The Supreme Court on March 18 set aside the bail order of the Madhya Pradesh High Court where it had directed a man accused of “outraging the modesty” of his woman neighbour to visit her house with a box of sweets and tie a rakhi on her wrist, to promise her that he would protect her in future.

A two-judge bench of Justices A.M. Khanwilkar and S. Ravindra Bhat took a stern view of the order and directed the judicial academy to develop a gender sensitization module for judges, lawyers, and public prosecutors.

The Supreme Court on August 6 upheld the Delhi High Court Single-Judge order on Amazon’s petition against the Future-Reliance deal and held that Singapore’s Emergency Arbitrator Award, restraining Future Retail from going ahead with its merger deal with Reliance Retail, is valid under Indian law and can be enforced.

A Divisional Bench of Justice R.F. Nariman and Justice B.R. Gavai stated, “The emergency arbitrator’s award under section 17(1) and the single judge’s order is upheld.”

The Supreme Court bench headed by Justices A.M. Khanwilkar, Dinesh Maheshwari and Aniruddha Bose dismissed the plea against the Delhi HC order which had dismissed the plea seeking to halt the construction of “Central Vista Redevelopment Project” and had imposed a cost of Rs 1 lakh on petitioners.

The Supreme Court today agreed with the findings of the Delhi High Court after noting that the petitioner had selectively chosen Central Vista Project and did not even research about other public projects which were allowed during the lockdown.

The Supreme Court on September 23 expressed contentment over the Central government’s decision to provide ex-gratia of Rs 50,000 as financial help to the family of persons who died due to Covid-19 amid the pandemic.

Solicitor General Tushar Mehta informed the Apex Court that those persons who have committed suicide suffering from Covid-19 will also be entitled to avail the financial help as granted under SDRF, in accordance with the guidelines issued by NDMA under Section 12 (iii) of DMA.