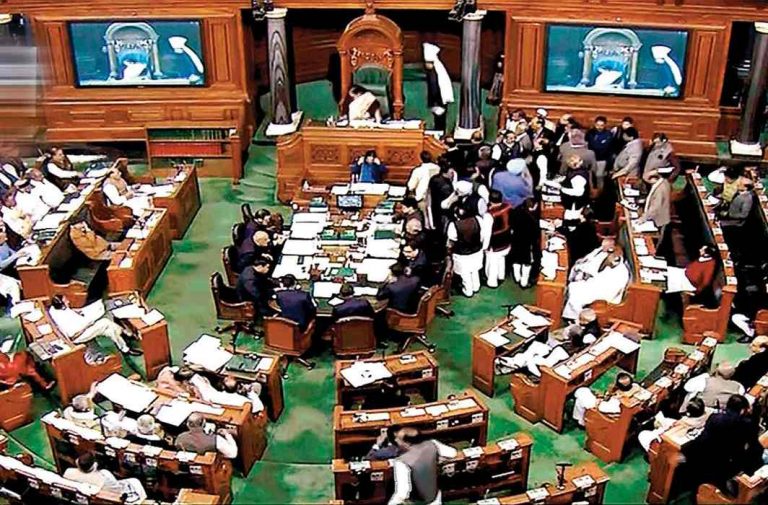 The 2G scam case against Congress-led UPA falling through in court provided additional ammunition to the Opposition against the ruling BJP and pepped up an already aggressive Congress targeting Prime Minister Narendra Modi for his bizarre accusation of his predecessor Dr Manmohan Singh conspiring with Pakistan to influence Gujarat polls.

The mood manifested in the Parliament where the Congress stepped up its attack, once again forcing the Rajya Sabha to be adjourned after 2 pm. Lok Sabha, where the BJP has a majority, continued to function, although amid protests and disruptions.

The ruckus in Rajya Sabha denied cricket icon Sachin Tendulkar his maiden attempt to speak in the House. Tendulkar was to initiate a short duration discussion on the right to play and the future of sports in India, but the protests led Chairman M Venkaiah Naidu to adjourn the House for the day. In cricketing parlance, Sachin was sent back to the pavilion without getting a chance to open his account.

The signs were clear from the morning. As soon as the Rajya Sabha met to start its work for the day, Congress members shouted slogans, drowning the voices of other members and forcing Naidu to adjourn the proceedings till 2 PM.

Leader of the Opposition and Congress leader Ghulam Nabi Azad sought an explanation from Modi for the ‘false propaganda’ on the 2G scam to come to power in 2014. He said the Congress has, since the past week, been seeking an explanation from the Prime Minister over his allegations against Singh during the Gujarat polls. After the acquittal of all the 2G case accused, “we want to ask where did all the allegations (of scam) go,” he said.

Naidu disallowed Azad’s submission saying he had not given any notice. Citing a May 22, 1990 ruling of then Rajya Sabha Chairman Shankar Dayal Sharma, Naidu said that the Chair’s ruling on not allowing suspension of a Question Hour or allowing a discussion was final.

With Congress members refusing to relent and even coming out into the Well of the House, even moving up in front of treasury benches at one point, Naidu finally adjourned the House till 2 pm, after several attempts to silence the agitated MPs and make them return to their seats.

Normally, in case of disruptions in the first hour of the sitting, the Chair adjourns proceedings till noon, and the adjournment till 2 pm was unusual.

After 2 pm, Sachin Tendulkar was to get his turn and make his maiden speech. However, Samajwadi Party (SP) leader Naresh Agarwal said he had a point of order: whether CAG reports can be leaked to newspapers before they are tabled. “Can we summon people responsible for tarnishing those in constitutional offices on the basis of CAG reports,” he wanted to know. The question was in the context of the acquittal of all 2G case accused.

He also asked whether the image of those in constitutional offices can be tarnished on the basis of CAG reports when ‘99 per cent of the points’ raised in them are settled after they reach the Public Accounts Committee (PAC) for scrutiny.

After this, when Naidu sought to initiate the discussion on sports saying this was Tendulkar’s maiden speech and he should be heard, several Congress MPs got up and raised the issue of the PM’s remark and demanding his apology, shouting slogans: ‘Desh ko gumrah karna band karo’ (stop misleading the nation).

Naidu’s admonitions failed to restore order in the House. As the protests continued, a livid Naidu asked Tendulkar to proceed. The cricketer got up, but could only look on as noisy protests went on. Naidu decided it was best to adjourn the proceedings for the day.

Thursday, being the Question day for the Prime Minister’s Office in Rajya Sabha, Modi was expected to be present during Question Hour slated at noon.

Meanwhile, a report from news agency ANI said that BJP’s Vinay Sahasrabuddhe has given a notice under rule 267 in Rajya Sabha demanding suspension of business today to discuss “serious situation arising out of the use of derogatory language against PM by senior leaders of Congress”

In Lok Sabha, too, Congress raised the issue of Modi’s remarks against Dr Singh, protesting the Speaker’s decision not to allow them to raise the matter.

The Congress members trooped into the Well during the Question Hour and raised slogans, even as Speaker Sumitra Mahajan went ahead with the proceedings. Leading the Congress charge was Jyotiraditya Scindia. Little over 30 minutes into the Question Hour, he expressed concern about not being given the chance to raise the issue.

Mahajan said she would not allow them and asserted that the issue was something that was raised at a public meeting and this was an elected House.

An agitated Scindia said the party has been raising the issue for four days but they were not being given an opportunity to speak. “Where is justice,” he asked and wondered “what kind of Parliament is this? Give us a minute (to speak).”

He also took a swipe at the ruling party saying they want to listen to only ‘Mann ki Baat’, referring to Prime Minister Narendra Modi‘s monthly radio address.

“It is a serious issue, the allegation was against an ex-Prime Minister Manmohan Singh, an ex-Vice President and ex-Army chief,” Scindia said referring to Modi’s remarks at a recent election rally in Gujarat.

Scindia said the voice of opposition was being muffled in the House and questioned if the Government would decide what issues can be raised in the Lok Sabha.

The Speaker, however, did not permit the issue to be raised and proceeded with routine business. Congress members then staged a walkout in protest, with party leader Kharge saying the walkout was being done to “preserve the dignity of the country”.