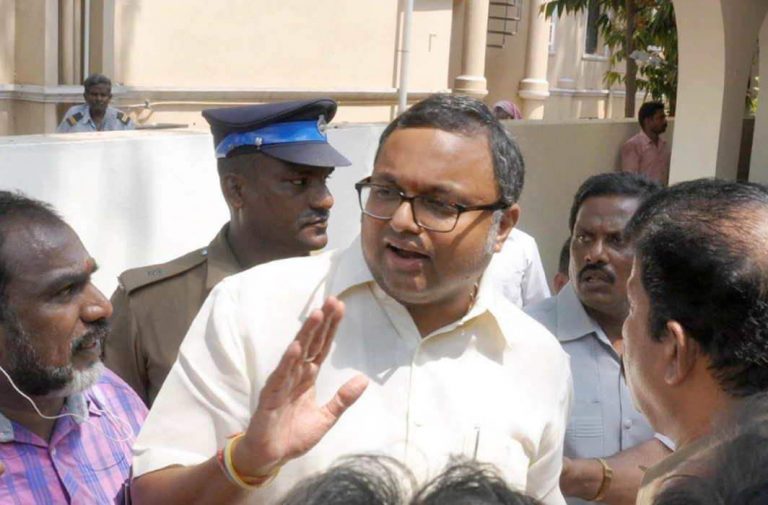 The counsel for Enforcement Directorate (ED) opposed bail to the Chartered Accountant (CA) Bhaskar Raman. He said that Raman needs to be confronted with Karti Chidambaram.

“Peter and Indrani Mukherjee have recorded statements that Karti Chidambaram demanded 1 million dollars for getting the FIPB approval in INX Media,” the counsel submitted.

The Court reserved order on the bail plea of Raman and adjourning it to March 7, 2018.

Mehta submitted: “Karti Chidambaram didn’t complain of any uneasiness during medical check-up. Karti spent most of the time in hospital during police custody. We need atleast 14 days for interrogation. Karti Chidambaram was brought around 8 am today he got ready around 10 am so he was not questioned enough. He was not at all cooperating. Basic question were unanswered.”

Mehta continued: “It is shocking that Karti Chidambaram did not complain about health issues, once Doctor from Safdarjung Hospital put him in the cardiac care unit for the entire night. Karti Chidambaram was released only after 7.30 am in the morning. There are travel details, car rentals, hotel details and even email exchanges that match Indrani’s statements about meeting.”

Karti Chidambaram’s counsel Senior Counsel Abhishek Manu Singhvi countered Mehta’s submissions by saying: “I was kept in the general ward from 11 pm yesterday to 7 am today morning. I didn’t complain of any uneasiness. Doctor himself kept me there.”

Mehta further submitted: “The shares of Advantage Strategic were willed to be bequeathed to the daughter of Karti Chidambaram. The case is about serious corruption charges.”

Singhvi countered: “CBI didn’t issue any summon to Karti Chidambaram after August 2017. I am not Hindustan leaver I am Hindustan returner. How can CBI claim non-cooperation when they haven’t issued summons to me. All documents are in their possession. There is no ground for custodial interrogation. CBI should explain Karti Chidambaram’s arrest and remand.

“He has been interrogated for 22 hours in this case. He appeared twice on summons dated August 23, August 28, 2017. He hasn’t received any further summons? How is it possible to allege non-cooperation? He shared his flight details as per Court orders also. I want to raise an issue why Indrani Mukherjee’s 164 CrPC statement being leaked to media by CBI.”

Mehta refuted: “These are baseless allegations.”

Singhvi continued: “What is the necessity to arrest Karti Chidambram yesterday without any new summons and providing grounds of his arrest.”

Mehta rebutted: “All arguments are for bail application. Ours is the application for police custody.”

Singhvi further submitted: “CBI is playing serious fraud in seeking custodial interrogation of Karti Chidambaram. CBI is bending rules. Let them show what all questions they asked my client…No grounds of arrest have been furnished to him.

“The charges are 10 years old payment of Rs 10 lakh is the allegation. What special thing happened in the past two weeks and not in the last 6months? Was CBI sleeping for past 6 months? Don’t arrest me I am ready to stay in New Delhi.”

Mehta replied: “We have enough evidences and that is the reason why we have arrested Karti Chidambaram.”

Singhvi asserted: “I have submitted all the copy of invoices now CBI have to prove where I have taken the bribe. P Chidambaram had forwarded a complaint against INX Media for a tax fraud. So where is the logic that I was helping INX Media?

“Karti Chidambaram has said in an affidavit in Supreme Court that he doesn’t have undisclosed properties abroad and if the govt finds anything he will surrender all such properties. He has never held any bank account abroad except when he was a student in US.”

Mehta exhorted: “Exhausted all drastic measures against Karti Chidambaram, he needs to be interrogated in custody to answer.”

“It is my duty to satisfy the court,” Mehta said while placing supreme court judgement and clarifies why the arrest was made.

Mehta continued: “Question asked to him are different and remains unanswered. You should appreciate that we are already on the stage of investigation. Documents containing evidences which proves Indrani Mukherjee’s 164 CrPC statement that she and her husband Peter Mukherjee met Karti Chidambaram.