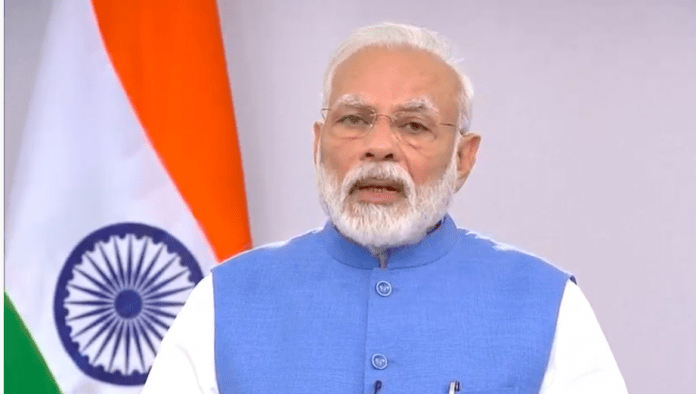 The Prime Minister Narendra Modi on Sunday said that as the country gradually emerged from more than two months of lockdown and economic activities begin, it is all more important to be vigilant and careful and keep up up the do’s and don’t’s adapted during the lockdown.

Modi says that despite India’s big population, the spread of the virus has been slower compared to other countries because of the people-driven response to the pandemic. “We have endured suffering, but everyone is resolved to handle it,” he says.

Addressing the nation on his Monthly Mann Ki baat programnnem the PM said “When last time I spoke with you in Mann Ki Baat, passenger trains, buses, air services were closed but this time curbs have been lifted. Shramik Special trains, other special trains and flights have resumed with adequate precautionary measures.”

PM Modi said that “During the last two Mann ki Baat programmes, we have been largely discussing the COVID-19 situation. It indicates how importance of talking about the pandemic and taking the relevant precautions.” He added that it is important to be even more careful now.

As the Home Ministry announced that the lockdown has been extended only in the containment zones in the phase five of the lockdown, PM Modi said that “A major chunk of economy is active now. There should be no laxity in maintaining six feet distance (Do Gaj Doori), wearing masks & staying indoors as much as possible. We need to be more vigilant now. Due to everyone’s support, fight against COVID-19 is being fought strongly.”

Further, he added that the fight against COVID-19 is also being powered by the innovative spirit of our citizens. They are innovating in a wide range of sectors. “One more thing that has touched my heart is innovation at this moment of crisis. A multitude of countrymen from villages & cities, from small scale traders to startups, our labs are devising even new ways of fighting against Corona; with novel innovations,” PM Modi said.

Comparing India’s situation with others, PM said that “When we look at other countries, we realise how big is achievement of Indians. Our population is many times more than other countries, challenges are different still COVID-19 didn’t spread so rapidly as in other countries & fatality rate is also notably lower.”

While addressing the plight of the poor, PM Modi said, “There is no section in our country that is unaffected by the difficulties caused by the disease. However, the worst affected are the poor and the labourers. Their pain, their agony, and their ordeal can’t be expressed in words.”

Adding that few days ago, the number of Ayushman Bharat beneficiaries crossed over 1 crore, he said “If the poor had to pay for their treatments in hospital, if they weren’t treated for free then they had to spend somewhat around Rs 14,000 crore. Ayushman Bharat has saved money of poor.”

He also congratulated the doctors, nurses and medical staff who treated patients under this scheme.

PM Modi also requested people to participate in the unique experiment of International Video Blog competition titled ‘My Life, My Yoga’ by the Ministry of AYUSH.

Modi also addressed the issue of locust attack in several states. He said, “While eastern part of India is facing natural calamity caused by cyclone, many parts of the country are under locus attack. These attacks have reminded us how much damage this small insect can cause. Locust attack runs into several days, a huge area gets affected.”