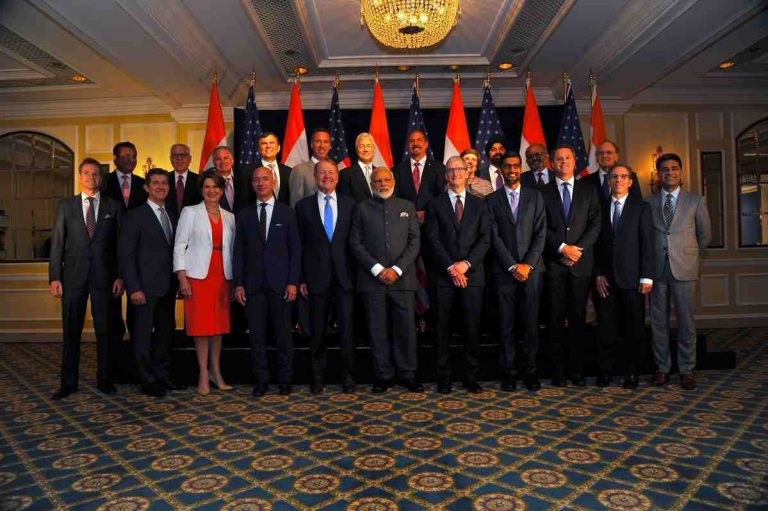 Prime Minister Narendra Modi on Sunday (June 25) met with the CEOs of 20 leading American firms in Washington DC and asked them to invest in the country. He told them that India’s growth could be an equally beneficial partnership for the US and the American companies had a great opportunity of contributing to that benefit.

According to media reports Modi said that India over the years has emerged as a business-friendly country and the upcoming GST would further accelerate its growth. Some of the CEOs raised concerns over the impact of GST on the Indian economy but the prime minister assured them that the overall impact of the new tax reforms would be positive on all the sectors.

Modi also lauded GST to be a landmark initiative and said that its implementation could be a subject for studies in the business schools of US.

He said that India’s economy attracts the world, especially in areas like manufacturing, commerce and trade due to the large young population of the country and the rising middle class. He went on to say that the world is looking up to India to which his government has responded by initiating 7,000 reforms for the ease of doing business. He also expressed his commitment to the motto, “minimum government, maximum governance.”

The CEOs who attended the meeting included Google’s Sundar Pichai, Tim Cook of Apple and Microsoft’s Satya Nadella. Pichai expressed Google’s excitement to invest in India. He also expressed optimism towards the July 1 rollout of GST.

The CEOs extended their support to prime minister’s ‘Make in India’, ‘Digital India, and ‘Start Up India’ initiatives. As per reports, several CEOs also expressed their willingness for partnership in India’s skill development and education initiatives.