Privation of property without due process is violation of human rights: Supreme Court 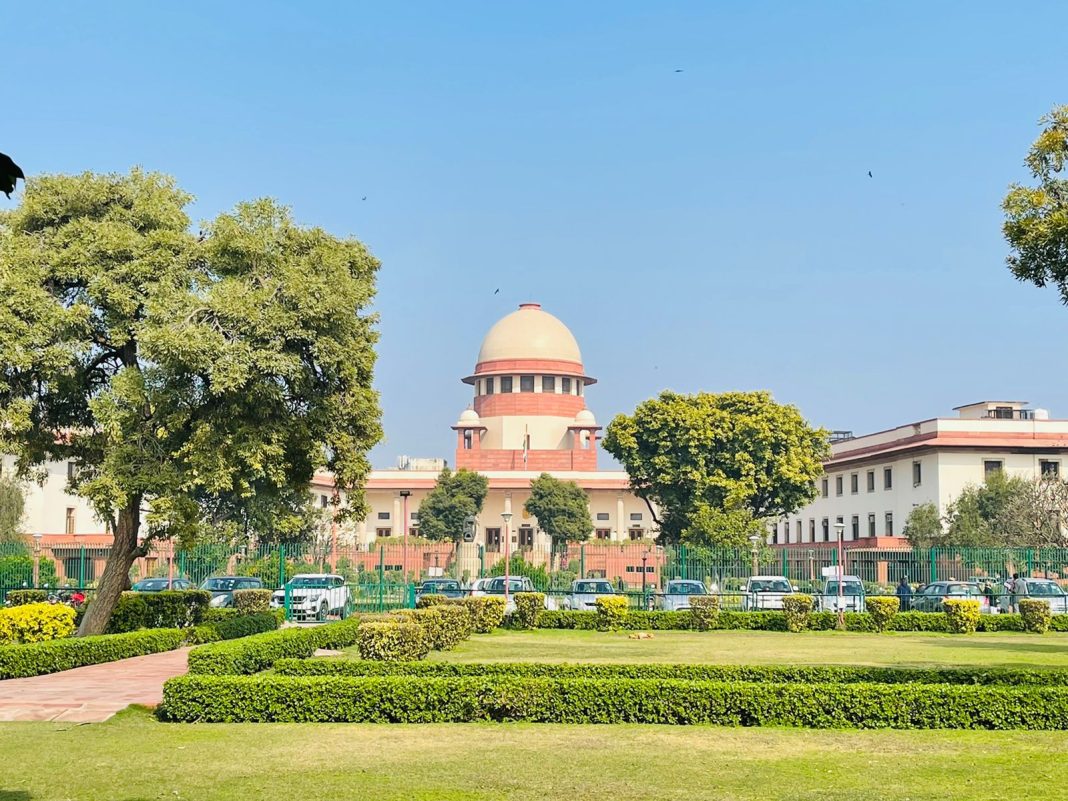 The Supreme Court observed that the forcible dispossession of a person from his private  property without following due process of law, was violative of human right and constitutional right under Article 300-A of the Constitution.

The Respondent-State utilised the subject land and adjoining lands for the construction of the ‘Narag  Fagla Road’ in 1972-73, but allegedly no land acquisition proceedings were  initiated, nor compensation given to the appellants or owners of the adjoining  land.

Pursuant to a judgment by the Himachal Pradesh High Court directing the State to initiate land acquisition proceedings, a  notification under Section 4 of the Land Acquisition Act, 1894  was issued on 16.10.2001 (published on 30.10.2001) and the award was passed  on 20.12.2001 fixing compensation at ₹30,000 per bigha. Proceedings under Section 18 of the Act for enhancement of compensation, were initiated by ten neighbouring land owners  whose lands were similarly  utilised for the construction of the same road and an award4 dated 04.10.2005 was  passed by the reference court in their favour. It was held that the reference  petitioners were entitled to enhanced compensation of ₹39,000 per bigha;  solatium of 30% per annum on the market value of the land; additional  compensation at the rate of 12% per annum under Section 23(1-A) of the Act  w.e.f. 16.10.2001 (date of issuance of notification under Section 4) till the date of  making of the award by the Collector, i.e. 20.12.2001; and under Section 28,  interest of 9% per annum from 16.10.2001 for a period of one year, and thereafter  15% per annum, till date of payment. In 2009, the High Court dismissed the  appeal against this order by those claimants, who were seeking statutory interest  from the date of taking possession .

Similarly situated land owners, filed writ proceedings before the High  Court: a writ petition filed by one Anakh Singh, from the adjoining village was  allowed by the High Court with the direction to acquire lands of the writ petitioners under the Act, with consequential benefits; subsequently other  similarly situated owners also received the benefit of these directions.

This led the appellants to file a  petition before the High Court in 2011,  seeking compensation for the subject land or initiation of acquisition proceedings under the Act. Relying on a Full bench decision of the High Court, it was held in the impugned judgment that the matter involved disputed questions of law and fact for determination on the starting point of limitation, which could not be adjudicated in writ proceedings. The writ petition was disposed of, with liberty to file a civil suit in accordance with law. Aggrieved, the appellants have approached the Supreme court through these appeals.

In the Supreme Court the , Division Bench of Justice S. Ravindra Bhat and Justice Pamidighantam Sri Narasimha observed that while the right to property is no longer a fundamental right, at the time of dispossession of the subject land, this right was still included in Part III of the Constitution. The right against deprivation of property unless in accordance with procedure established by law, continues to be a constitutional right under Article 300-A.

Given the important protection extended to an individual vis-a-vis their private property  and the high threshold the State must meet while acquiring land, the question remains – can the State, merely on the ground of delay and laches, evade its legal responsibility towards those from whom private property has been expropriated?

In these facts and circumstances, the Court find this conclusion to be unacceptable, and warranting intervention on the grounds of equity and fairness.

The Bench noted  that the State has, in a clandestine and arbitrary manner, actively tried to limit disbursal of compensation as required by law, only to those for which it was specifically prodded by the courts, rather than to all those who are entitled.

This arbitrary action, which is also violative of the appellants’ prevailing Article 31 right (at the time of cause of action), undoubtedly warranted consideration, and intervention by the High Court, under its Article 226 jurisdiction.

The court is also not moved by the State’s contention that since the property is not adjoining to that of the appellants, it disentitles them from claiming benefit on the ground of parity. Despite it not being adjoining (which is admitted in the rejoinder affidavit filed by the appellants), it is clear that the subject land was acquired for the same reason – construction of the Narag Fagla Road, in 1972-73, and much like the claimants before the reference court, these appellants too were illegally dispossessed without following due process of law, thus resulting in violation of Article 31 and warranting the High Court’s intervention under Article 226 jurisdiction.

In the absence of written consent to voluntarily give up their land, the appellants were entitled to compensation in terms of law.

The need for written consent in matters of land acquisition proceedings, has been noted in fact, by the full court decision of the High Court in Shankar Dass (supra) itself, which is relied upon in the impugned judgment.

In view of the court’s extraordinary jurisdiction under Article 136 and 142 of the Constitution, the Bench directed the State to treat the subject lands as a deemed acquisition and appropriately disburse compensation to the appellants in the same terms as the order of the reference court dated 04.10.2005 .

The Respondent-State is further directed by the Court  consequently to ensure that the appropriate Land Acquisition Collector computes the compensation, and disburses it to the appellants, within four months .

The appellants would also be entitled to consequential benefits of solatium, and interest on all sums payable under law w.e.f 16.10.2001 (i.e. date of issuance of notification under Section 4 of the Act), till the date of the impugned judgment, i.e. 12.09.2013.
“For the above reasons, the appeal is allowed and the impugned order of the High Court is hereby set aside. Given the disregard for the appellants’ fundamental rights which has caused them to approach this court and receive  remedy decades after the act of dispossession, we also deem it appropriate to direct the Respondent-State to pay legal costs and expenses of ₹ 50,000 to the appellants. Pending applications, if any, are hereby disposed of”, the order reads.