Above: Senior advocates Raju Ramachandran (second from left) and Arvind Datar (right) spoke for and against the motion/Photos: Bhavana Gaur

The Privy Purses case, which challenged the Indira Gandhi government’s decision to abolish privy purses, was revisited at a recent event in the context of abolition of Article 370 that gave special status to Jammu and Kashmir

It’s been just over a fortnight since the government abolished Article 370 of the Constitution through a Presidential order and split the state of J&K into two Union Territories through a bill passed by Parliament. As the state slowly limps back to normalcy, several impassioned voices have spoken out against the centre’s move. The predominant argument seems to be that the move is a betrayal of the constitutional promises made by the government of India to the people of J&K.

This sentiment found expression at another recent discourse, albeit in a very different setting, at the Palkhivala Debate, 2019. This first of its kind debate was held on August 21 at the Indian Society of International Law, New Delhi, to commemorate the birth centenary of legal luminary Nani Palkhivala. The motion was: “Was the final outcome in the privy purses case a constitutional betrayal?”

Noted senior advocates Raju Ramachandran and Arvind Datar eloquently spoke for and against the motion with former Supreme Court judge Justice AK Sikri as the moderator. The two senior advocates were assisted by co-speakers Shankar Narayanan and Gautam Bhatia, respectively.

A brief overview of the historical context is in order here. In consideration of the princely states signing the instruments of accession after Independence, the government of India had granted to them a privy purse, i.e., a fixed tax-free amount payable annually to the former rulers of such states. Such payments were guaranteed by Article 291 of the Constitution.

This system continued until September 1970 when attempts were first made to abolish it. A Bill to this effect was passed in the Lok Sabha but eventually failed as it did not get the requisite majority in the Rajya Sabha. On the very same day in the evening, the President of India signed an instrument withdrawing recognition of all the former rulers. This Presidential Order was challenged before the Supreme Court (SC) by some of the erstwhile princes led by Madhav Rao Scindia with Palkhivala as their counsel in HH Maharajadhiraja Madhav Rao and Ors vs Union of India (known as the Privy Purses case). The SC struck down the order, saying that the institutions of rulership and privy purses were enshrined in the Constitution and were an integral part of it and thus could not have been abolished by a Presidential Order.

Soon after, in 1971, another attempt was made to abolish the privy purses and the Constitution (26th Amendment) Bill was passed by both Houses of Parliament. This Bill was challenged before the SC in the 1993 case of Raghunathrao Ganpatrao and Ors vs Union of India. This time, however, the SC upheld the government action. Justice Sikri threw light on how the privy purses verdict was received and reminisced how at a time when TV channels did not conduct debates on a daily basis like they do now, this case attracted great attention and generated a lot of debate.

Arguing for the petitioner, Ramachandran opened the debate by laying out the historical context explained above. He went on to say that the Union of India would not have come into being had the princes not agreed to relinquish their territories and large cash balances and voluntarily acceded to the fledgling state. In return, all they got was their privy purses and gun salutes. By abolishing the former, the government of India had reneged on its promises and thus committed a constitutional betrayal, said Ramachandran. 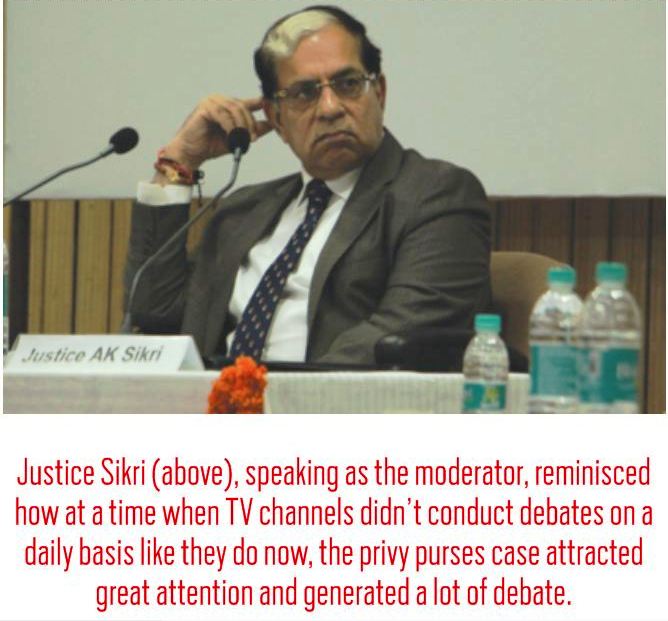 His co-counsel, Narayanan, drew attention to the real motivation behind the abolition of the privy purses. He said this move was part of a populist socialist agenda pursued by the Indira Gandhi government in the 1970s after it began to lose its vice-like grip over the Indian electorate. In this political climate, the privy purses were targeted as low-hanging fruits and the former rulers were cast as villains. He stressed that it was this particular approach that amounted to a betrayal as certain promises which were agreed upon between the government of India and the former rulers after Independence and integrated into the Constitution were later unilaterally abolished when it ceased to be convenient for the government to honour them.

Datar, appearing as the defence counsel, said the privy purses were one of the many privileges awarded by the government of India to the former rulers. Not only were they allowed to retain their palaces, lands and other personal assets but also enjoyed immunity from various taxes. These details were put forth to contend that the abolition of the privy purses had not rendered the rulers penniless and thus cannot strictly be called a betrayal. Had all the privileges been taken away, there would have been sufficient ground to call it a betrayal, Datar said. He then cited a 1965 decision of the SC which accepted the argument that the privy purses were nothing but a political pension, and asked how in the wake of this decision the petitioner can argue that the privy purses were constitutional guarantees.

Datar also contended that the SC did not even have jurisdiction to deal with the case as Article 363 of the Constitution says that any dispute arising out of any provision of a treaty, agreement, covenant or other similar instrument executed between the Indian State and the former rulers shall be non-justiciable. Datar’s co-counsel, Bhatia, contended that it was incorrect to argue that there had been a constitutional betrayal as Article 291 did not create any constitutional obligation vis-à-vis the privy purses. It merely stipulated the mechanism through which the privy purses (which were agreed upon under the instruments of accession) would be implemented, i.e. through a charge on the Consolidated Fund of India.

The debate had everything—oratory, passionate arguments, interesting asides and humorous anecdotes. Justice Sikri quipped at one point, “A popular saying goes: If you don’t have facts, hammer the law. If you’re not strong on law, hammer the facts. And if you have neither, hammer the table.” The audience erupted in laughter as on several other occasions when the participants played the game of wits. In a 90-minute debate marked by technical arguments on various provisions of the Constitution, there was plenty of repartee, much of it light-hearted, presumably because everyone knew that at the end there would be no winners or losers.