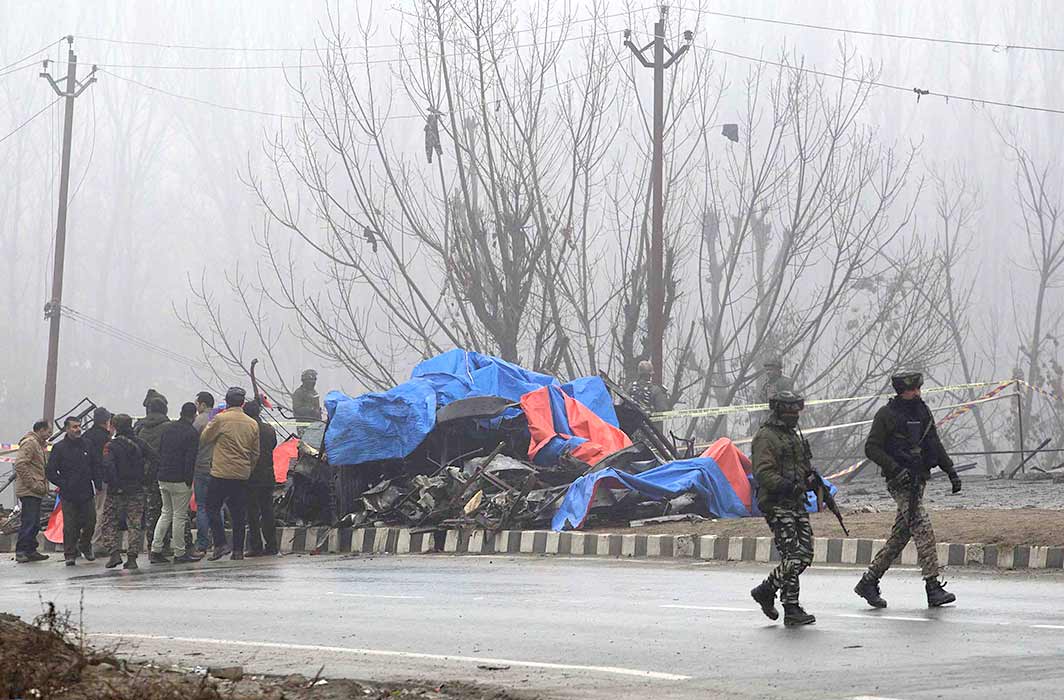 A news report in sections of the press about  the Jaish commander  talking openly  about plans of the impending Pulwama attacks days before it happened bring to mind the famous  Parliamentary Committee on Defence released last august blaming the Modi Govt for ‘Compromising With India’s Safety & Security’. The Committee headed by senior BJP leader Murli Manohar Joshi and comprising of 16 party MP’s went on  to say that india’s defence preparedness level was ‘unacceptable’ and the situation was ‘’ominous’. Had the warning been heeded, there perhaps would have been no Pulwara.

According to a report in India Today, a week before the Pulwara attack, the chief of Pakistan-based terrorist outfit Jaish-e-Mohammad(JeM), Masood Azhar, addressed an open gathering in Pakistan under heavy police security. A recording of the event released by the terror outfit confirms that Pakistan authorities even provided security personnel in uniform to Azhar. The kingpin of the terrorist group addressed a gathering of recruits in Pakistan’s Peshawar on February 5 amid heavy security and wailing sound of police sirens.

Obviosuly , the Modi government cared no hoot for the parliamentarty committee on defence crammed with BJP Mps who found nothing wrong in slamming ikts own government, accusing it of  bringing defence preparedness down to the 1962 levels when China virtually steamrolled over India.  In fact, the report of the Committee On Estimates on ‘Preparedness Of Armed Forces-Defence Production & Procurement’ has said that the Modi government is neglecting India’s national security and the implications could be ‘Ominous’.

The committee which has examined the three defence chiefs and the entire top brass of the Raksha Mantralaya has said:

“…… Today at 1.6% of the GDP, India’s defense budget to GDP ratio has reached the levels we had before 1962.The implications could be ominous.”

A detailed report on website Newscentral24X7 pubblished in August last year when the committee came out with the report has this to say:

“In the current geo-political scenario, a country of the size of India cannot afford complacency when it is a question of defence preparedness even for a two-front war while retaining its dominance in the Indian Ocean. The Committee, therefore, strongly emphasize that allocation of adequate financial resources for defence preparedness both for the current needs and expansion & modernization plans should be accorded highest priority to enable the services to meet the challenges concerning safety and security of the country.”

“…Though the 14th Finance Commission had clearly acknowledged that it had no competence to lay down the capital acquisition budget, bureaucratic inertia has resulted in the 13 Finance Commission recommendations being followed nevertheless…”

The committee notes that capital expenditure percentage has been dropping ever since Modi came to power:

“In the years 2012-13 and 2013- 14, the share of capital expenditure was 39% in each year, which in the year 2017- 18 and 2018-19 came down to 33% and 34%, respectively. What is more worrisome is the situation whereby the procurement has to be adjusted as per the budgetary allocations made by the Government which are not as per the requirements projected as per LTIPP.”

Scathing is only an understatement for a report which refuses to mince words and blames Modi for compromising India’s safety and security:

“any decrease in capital expenditure has an adverse impact on modernisation process of our forces and tantamount to compromising safety and security of our Country.

Pause. And think. A parliamentary committee has called out the government of the day for “Compromising safety and security of our country”, but we have got no response from the government. This has not come from the spokesperson of an opposition party or a think-tank but the highest Indian institution, the Parliament. And the Committee was headed by MMJ, the man who first brought Narendra Modi into national limelight by taking him along on the tiranga yatra in 1992 to Srinagar.

Modi and his National Security Advisor Ajit Doval have ensured that we now inhabit a region where we are surrounded by hostile neighbours with relationship breakdowns with every country including old foe Pakistan and even old ally Nepal.

Because of excessive secrecy and Modi’s style of personal diplomacy currently, we have no clarity on the critical relationship with super power China. The tricky relationship with Pakistan has witnessed several  U-turns, but as any strategic thinker knows, you prepare for capabilities not intentions

Modi may have great belief in his charm, but as we have repeatedly seen in the past four years, other countries do not care much for his hugs and name embossed suits when it comes to securing their own interests. Indian Armed Forces are not just not adding any more capability; they are in fact losing their edge under Modi. These capabilities will not be created in a moment, should the need arise tomorrow. Defence spending, as many wise people have said, is akin to buying insurance. You spend when you are healthy and use it when the emergency arises. Also, military capability is about deterrence which is the cornerstone of any robust diplomacy.

A senior MP on the committee pointed out to me that when Arun Jaitley was Raksha Mantri, he was also Finance Minister which took away the audit scrutiny and oversight entirely.  Jaitley as defence minister was recommending what wearing his Finance Ministry cap Jaitley was approving. The Rafale deal was perhaps due to doing away with statutory audit oversight and throwing well-established norms out of the window.