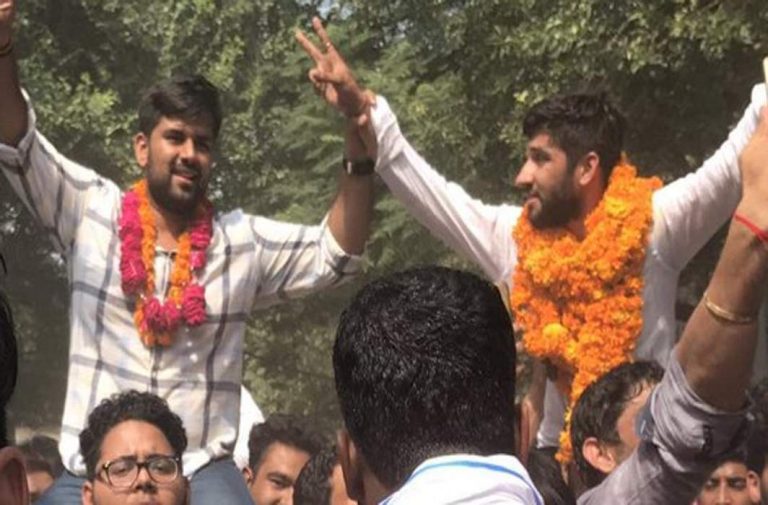 Above:  Candidates celebrating their victories in the DUSU elections which were declared today

For the NSUI, the victory comes as a major morale booster as the outfit had failed to win the president’s post since 2012 and had managed to win only one post – that of joint secretary – in the polls held in 2016. In the recent JNU students’ body polls too; the NSUI had faced a humiliating defeat with even votes polled under the None Of The Above (NOTA) being higher than its share.

The counting of votes that began on Wednesday – a day after the elections saw a 43 per cent voter turnout – saw its fair share of suspense as the ABVP had been leading on all posts till well past noon. However, around 1pm, the NSUI nominee took a decisive lead in the post for president while margins kept fluctuating for the vice-presidential candidates of the two key student outfits.

The DUSU results, however, weren’t a comprehensive setback for the ABVP as the outfit’s candidates grabbed the posts of Secretary and Joint Secretary. Besides, the result for the post of vice president wasn’t a landslide for the NSUI either; its candidate winning just over 250 votes more than the ABVP rival.

The Vice president’s post also went to the NSUI with its candidate Kunal Sehrawat grabbing 16,431 votes against the ABVP’s Paarth who finished a close second with 16,256 votes.

ABVP’s Mahamedha was declared victorious in the election for the post of secretary while the outfit’s nominee, Uma Shankar bagged the position of joint secretary after a recount.

Interestingly, NSUI candidate Rocky Tuseed was allowed to contest for the DUSU president’s post only last week after the Delhi High Court set aside an order passed by the varsity’s chief election officer who had disqualified Tuseed from contesting the polls. The importance of the DUSU polls for the Congress can be gauged by the fact that the party had got senior leader and advocate P Chidambaram to represent Tuseed in the court case.

Started in 1954, the DUSU elections see students from 50 of 77 Delhi University colleges participate in the polling process to elect office bearers to the positions of president, vice-president, secretary and joint secretary.

A total of 43 per cent (over 46000 students) voter turnout was recorded in the polls held on Tuesday, nearly a 10 per cent increase than the turnout in last year’s polls. According to the professors who kept the track of the elections, far flung colleges recorded a poor voting percentage, whereas the on-campus colleges had a healthy voter turnout. While Hindu College with 65 per cent recorded the highest turnout, Aryabhatta College was among the lowest with 14 per cent turnout. SB Babbar, DUSU Chief Election Officer had made a special appeal asking the students to vote in the elections.

Senior Congress leaders took to Twitter to hail the victory of NSUI candidate in the top posts as a sort of referendum by the youth against Prime Minister Narendra Modi and his government’s failure in creating jobs and better economic opportunities for the youth.