The petitioners contend they are aggrieved by the suspension of internet facilities at the borders where the farmers are protesting and said it's a sheer violation to the fundamental rights of a citizen. 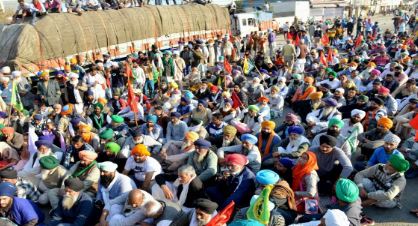 A petition has been filed before the Supreme Court in the backdrop of farmers’ protests seeking the immediate restoration of the internet at Singh, Ghazipur and Tikri.

The petitioners, advocate Sanpreet Singh Ajmani and Pushpinder Singh, submitted that they are “aggrieved by the propaganda and hate news being published by some of the news channels and over the social networking sites (like Twitter, YouTube, Facebook, WhatsApp, Instagram etc.) spreading hate against the entire Sikh community.”

“The petitioners are aggrieved by the propaganda and hate news being published by some of the news channels (like AajTak, Republic Bharat, ABP news etc.) and over the social networking sites (like Twitter, YouTube, Facebook, WhatsApp, Instagram etc.) spreading hate against the entire Sikh community for the alleged misdeeds and sinful acts of a few elements,”

“Petitioners and other fellow citizens having faith on Sikhism and Sikh Gurus, which is recognized for their sacrifices and selfless services for the nation are badly perturbed and troubled to note the indifferent acts of these media channels, which has wide circulations nationally and internationally. The hate news published by them has been causing irreparable loss and injury to the entire Sikh community which cannot be compensated in any manner. The social networking sites where fake hate news is allowed to be published, is also deterrent to our society. If, the hate news/publications against the Sikh community are not stopped immediately, it might result into dastardly situation and may bring disharmony in the entire country.”

The petitioners contended they are aggrieved by the suspension of internet facilities at the borders where the farmers are protesting and said its a sheer violation to the fundamental rights of a citizen.

The suspension of internet order issued by the Ministry of Home Affairs is a gross misuse of power by the Central Government and is causing disruption to individuals in exercising their fundamental rights in the adjoining areas and also of the protesters in violation of the fundamental right conferred under Article 19 (1) (a) which had been upheld by the Hon’ble Supreme Court in Anuradha Bhasin v. Union of India (2020) 3 SCC 637 and Foundation for Media Professionals v. Union Territory of Jammu and Kashmir and Another (2020) 5 SCC 746, said the plea.

“Internet is a basic human right that aids the citizen in expressing their opinions on global platforms. The internet has a more extensive degree and is an unfilled jar into which individuals pour its substance in the light and global platforms. United Nations has even suggested that Internet be made a Fundamental Right by every country and has also said that disconnecting people from the internet is a human rights violation and against international law,” stated in the petition.

It also seeks directions to remove the iron nails and cemented barricades etc. which has been illegally installed to stop the farmers’ ingress and egress from the place of protest i.e. Tikri border and any other borders, to meet the ends of justice.