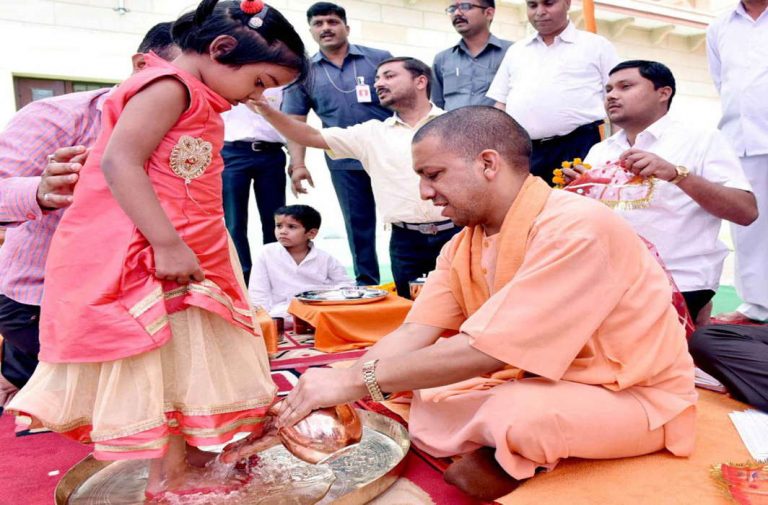 Above: With the opposition likely to unite, Yogi Adityanath will have to depend on vote polarisation to turn the tide in the BJP’s favour/Photo: UNI

District officials oppose the Adityanath government’s decision to withdraw the Muzaffarnagar riots cases but, Jat votes being crucial, the BJP is determined to push it through

For the BJP to even hope for returning to power in the Lok Sabha elections next year, it is imperative that the party capture Uttar Pradesh as it did four years ago. Then, it won 72 out of the 80 seats in India’s largest state and last year it won a landslide in the assembly polls. However, the results of several by-elections since then have brought only bad news, the last one being from Kairana in May where the party candidate was trounced by a united opposition candidate.

The BJP’s preparations to regain lost ground in the crucial state before the Lok Sabha elections next year faced a major setback last week. Its plans to withdraw over 130 cases related to the 2013 Muzaffarnagar riots, where all the accused were Hindus, was rejected by the district administrations of Muzaffarnagar and Shamli.

The district magistrate and senior officials of both the districts in their notings said that they were not in favour of withdrawing the cases. Muzaffarnagar District Magistrate Rajiv Sharma told the government that the withdrawal of cases would not be right from the administrative point of view.

The move to withdraw the cases was first made shortly after Yogi Adityanath took over as chief minister last year when a BJP delegation called on him and demanded that the “fake cases framed by the Samajwadi Party government to implicate senior leaders” be withdrawn.

Though in fits and starts, the government initiated several measures for the process of withdrawal of the cases, but they seem to have come unstuck with the officials turning down the proposal. The BJP leaders insist the move will come through. “The district authorities can have their say, but the final decision will be made by the government,” a senior BJP leader said.

In its bid to continue its hold over Uttar Pradesh for the second successive Lok Sabha elections, the BJP government had, shortly after it came to power last year, begun the process of withdrawing the 130 cases that were filed in the wake of the 2013 riots in which the accused were overwhelmingly Jats.

The by-polls earlier this year, especially in the Kairana Lok Sabha constituency, showed how crucial the community’s votes were to the party’s fortunes. In 2014, the BJP won the seat for the first time, thanks to the Jats overwhelmingly voting for the party in the first elections held after the Muzaffarnagar riots, which saw massive polarisation of votes in favour of the BJP.

For the Jats, the victory of the BJP in last year’s assembly elections held out the hope of the new Adityanath government withdrawing the cases which they alleged were foisted on them.

Several delegations of Jat leaders met the chief minister and senior BJP leaders to reiterate their demand for the withdrawal of cases. Despite the government announcing higher sugarcane prices than ever before and delivering on other promises on the agricultural front, its failure to withdraw cases meant it still did not manage to win the heart of the Jat voters. Sensing an opportunity in Kairana, the four-party opposition alliance put up a joint candidate against the BJP in the Lok Sabha by-elections two months ago and won.

Since the current Lok Sabha was set up, in which the BJP and its allies cornered almost two-thirds of the seats, there have been 27 by-elections to the lower house and the ruling party has won a mere six of them. Worse, the party has seen its vote-share dip by over 14 percent, while that of the united opposition went up by more than 20 percent. It is in this context that the party’s eagerness to withdraw the cases ought to be seen, as part of a larger strategy to get the correct caste mix in view of the old opponents resurfacing in a new united avatar. For the first time perhaps, the BJP realises that now it has to reckon with an opposition in which every party is ready to adjust and even concede some space for the common cause: to stop Modi in his tracks.

Despite the officials’ objections, analysts believe that the government is determined to push its move through, so that in the crucial state once again community polarisation comes to its aid less than a year from now.