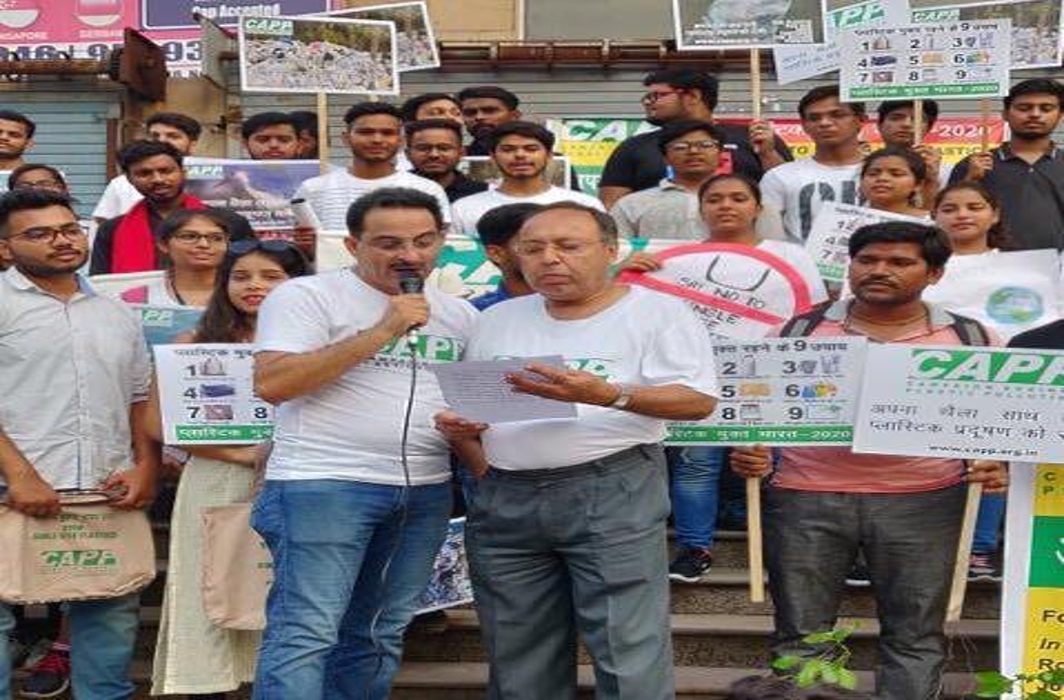 The road-show began with an oath: “To eradicate pollution caused by single-use plastics, to uphold the preamble of Foundation for Campaign Against Plastic Pollution, and endeavour to spread the word in the neighbourhood, to make the environment clean for the mankind, posterity and all creatures living on the earth”. The oath was administered by Founder President Shri Anoop Kumar Srivastava, Delhi Government Standing Counsel Advocate Naushad Ahmed Khan, Shri Shrikant Kumar Ambastha, Smt. Uma Srivastava, Smt. Mahima Ambastha, and Shri Ravinder Nath Sharma of F-CAPP.

The road show was organized in collaboration with the Members of Rotaract Club of Galgotias Educational Institution, Noida.

Chief Campaigner, Advocate Naushad Ahmed Khan interacted with the general public, the shopkeepers, managers of the Food Outlets and various other persons from different walks of life, taking commitment from them not to use single-use plastics. They were sensitized about the ill effects of plastic pollution.

Nukkad Natak and singing presented by Galgotias’ students were a great value addition and it drew a lot of public attention.

The Foundation for Campaign Against Plastic Pollution (F-CAPP) is spearheading a public movement on a wide scale and collaborating with Market Associations, Residents Welfare Associations (RWAs) and Educational Institutions in the National Capital Region (NCR) to organise public events. Since its inception in February this year, F-CAPP has worked tirelessly towards awareness campaigns against plastic pollution. The first awareness drive was launched at Sarojini Nagar market on 27th April, 2019.

F-CAPP has said the enthusiasm was very reassuring and will go a long way in reducing the plastic footprint in the society.