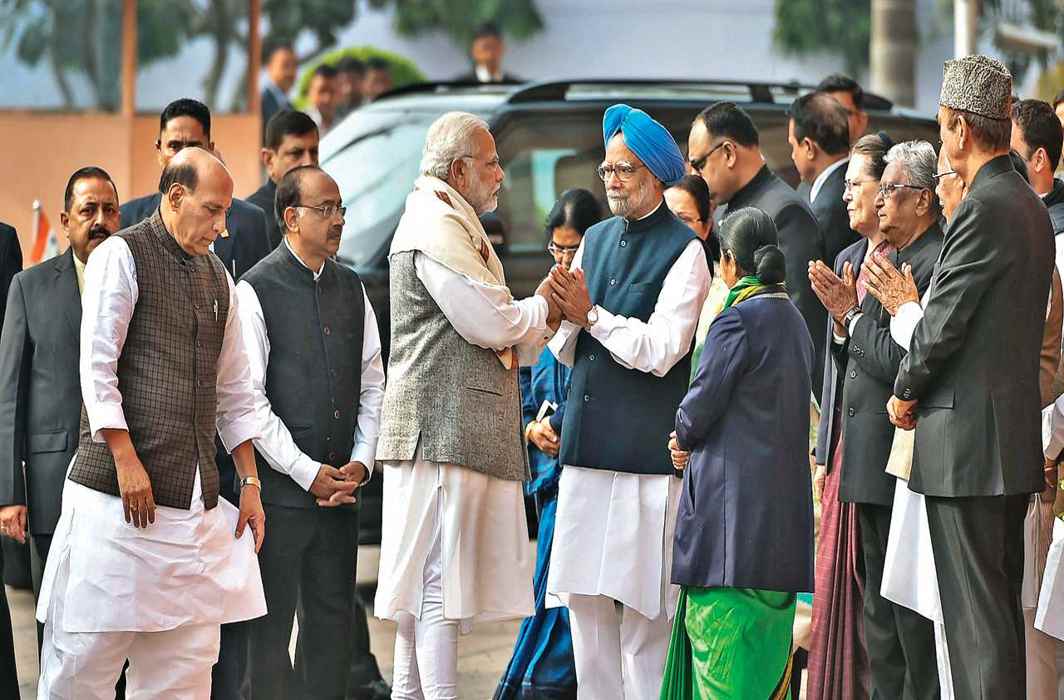 With a week of Parliament’s winter session already washed out, BJP goes on the defensive to broker peace with Congress-led Opposition

An end to the protests that have stalled Parliament proceedings, particularly in the Rajya Sabha, ever since the winter session began on December 15, was in sight on Wednesday. Union finance minister Arun Jaitley told the Upper House that Prime Minister Narendra Modi did not mean to question his predecessor, Dr Manmohan Singh, or former Vice President Hamid Ansari’s commitment to the nation.

The submission by Jaitley, who is also the Leader of the House in Rajya Sabha, comes after Opposition members forced a wash out of the past six sittings of the Upper House demanding an apology from Prime Minister Narendra Modi for suggesting during the election campaign for Gujarat Assembly that Dr Singh, Ansari and the Congress party was ‘conspiring with Pakistan’ to oust the BJP from Gujarat.

Modi’s statement – unsubstantiated as it was – had been squarely slammed by Dr Singh, who had accused the Prime Minister of “spreading falsehoods and canards”. Other dignitaries who were present at the said meeting – a dinner hosted at the residence of suspended Congress leader Mani Shankar Aiyar on December 6 for former Pakistan foreign minister Khurshid Kasuri – too had rubbished Modi’s allegation and said that there was no discussion on the Gujarat polls at the event.

Modi’s studied silence on the controversy had only agitated the Opposition members further and they protested, demanding an apology from the Prime Minister, when the Parliament’s winter session began on December 15. The uproar had led to a logjam that has already consumed six sittings of the curtailed winter session which only has 15 working days to transact its legislative business.

On Wednesday, the Treasury Benches facing heat from the Opposition over another controversial remark – Union Skill Development Minister Anant Kumar Hegde’s claim of the BJP being elected to power “to change the Constitution” and his assertion that “secularists do not know their parentage” – were forced to go on the defensive.

With the Opposition resolute in its demand for an apology from Modi for his comments against Dr Singh and for the resignation of Hegde from the Union council of ministers, the Centre finally gave in.

Union minister of state for parliamentary affairs, Vijay Goel told the Rajya Sabha that his party and its government was “committed to uphold the Constitution” and that Hegde’s comments found no resonance in the saffron fold – a view later also reiterated by his senior minister Ananth Kumar in the Lok Sabha. Jaitley came to the Rajya Sabha when it reconvened – after multiple adjournments earlier in the day – at 2pm and tendered his ‘half-apology’ on behalf of Modi.

“Prime Minister in his speeches didn’t question, nor meant to question the commitment to this nation of either former PM Manmohan Singh or former Vice President Hamid Ansari, any such perception is erroneous, we hold these leaders in high esteem, as well as their commitment to India,” Jaitley told the Rajya Sabha.

That the thaw was now ending was evident in Leader of Opposition in the Rajya Sabha, Ghulam Nabi Azad’s response to Jaitley. “I thank the Leader of the House for (the) clarification on what has been an issue of contention. I, on behalf of my party, say that we disassociate from any comments made by any member during elections that may have hurt the PM’s dignity… also we don’t want any such thing to be said in the future,” Azad said.

Azad’s mention of “disassociating” from comments made by Congress leaders against Modi during the Gujarat election campaign was a veiled reference to Mani Shankar Aiyar’s contentious jibe directed at the Prime Minister, who he had called a “neech kisam ka insaan” (low-level human). Aiyar’s comment had drawn an immediate rebuke from Congress president Rahul Gandhi, who had asked him to apologise for the statement hours before the Congress suspended Aiyar from primary membership of the party. Aiyar’s comment, many believe, had cost the Congress dear in the Gujarat polls – which it lost narrowly to the BJP – after Modi chose to use it in his favour by alleging that the Congress veteran had mocked him for belonging to a “neech jaati” (low caste).

With Jaitley issuing his half-apology and Azad accepting it, the stalemate seemed to have ended, at least in the Rajya Sabha. The Upper House then began debating the Indian Forest (Amendment) Bill, 2017 which was moved for consideration and passing.

In the Lok Sabha, however, the stalemate continued longer with Congress-led Opposition parties demanding an apology from Hegde. The Lower House of Parliament, in which the BJP enjoys a brute majority, did manage to pass the crucial National Capital Territory of Delhi Laws (Special Provisions) Second (Amendment) Bill, 2017 amid din much to the chagrin of Opposition members who even criticised Lok Sabha Speaker Sumitra Mahajan for condoning the practice of allowing the Treasury Benches to have key Bills passed without proper discussion and amid uproar.