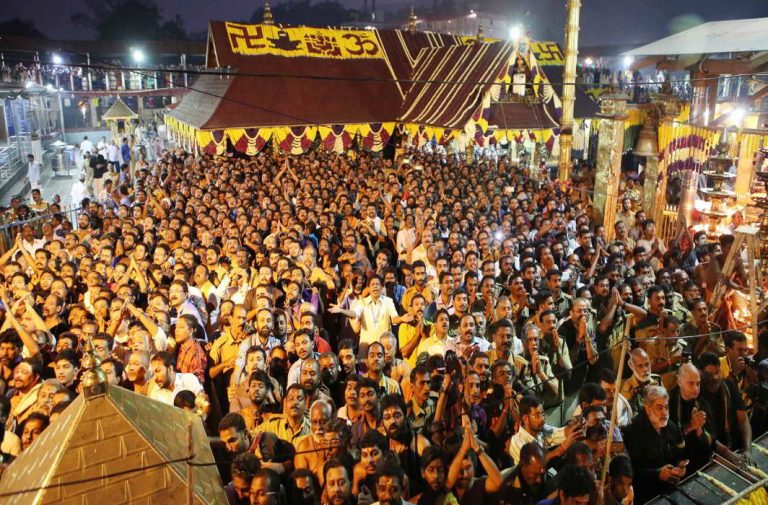 Above: Devotees rush to the lord Ayyappa temple at Sabarimala in Kerala on Tuesday (file picture). Photo: UNI

The Supreme Court on Friday (October 13) referred the critical religious case of the entry into Kerala’s Sabarimala Ayyappa Temple to a constitution bench. The temple bans the entry of women aged 10 to 50 into the temple, and the Indian Young Lawyers’ Association has filed a writ petition against this practice.

On Friday the apex court bench of Chief Justice Dipak Misra and Justices R Banumathi and Ashok Bhushan thought it was better that a constitution bench hear this.

A bench comprising Justices Dipak Misra (he was not Chief Justice then), J V Gopala Gowda and Justice Kurian Joseph was hearing the matter during April-May 2016.

The issue being discussed is whether the practice violates Art 14 and 25 of the Constitution.

It is also to be decided whether Rule 3 (b) of the Kerala Hindu Places of Worship Act violates Article 14.

A few more clarifications that are needed will be uploaded with the judgment.

The question that has been raised is: Does this ban on admission to the temple, on the basis of medical reasons of the woman violate the rights of equality?

It is being asked: Can this practice in religious institutions be allowed to stop women?

Is this prohibition by the religious body valid under the purview of religious freedom under Article 25 of the Constitution?

The issue has created major public unrest, because this completely discriminatory practice simply cannot exist in the 21st century, yet the temple insists that it will not lift the ban. Huge protests have been organised in the past and Trupti Desai, who has been successful in gaining entry to the Haji Ali Dargah, has also been part of it.