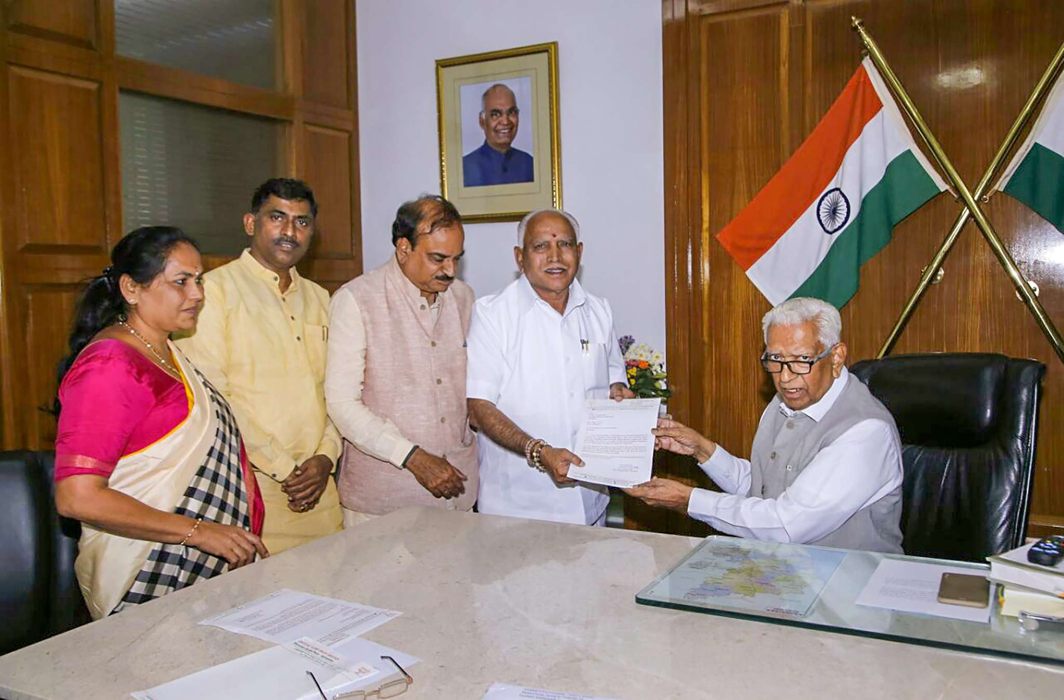 The arithmetic does not work – BJP needs 112 from the current 104 that it has from the just concluded Karnataka assembly polls – but Bookanakere Siddalingappa Yeddyurappa, 75, was sworn in at a simple ceremony on May 17 (Thursday) at 9am at the Raj Bhavan after Governor Vajubhai Vala gave the state BJP chief a 15-day window to prove his majority on the floor of the house.

In an unusual move, a three-member bench of the Supreme Court heard a plea from the Congress on the intervening night of May 16-17 that had sought a stay on the swearing-in. The bench, however, did not grant a stay but asked the BJP reps to provide the communication material before the Governor that led the latter to give Yeddyurappa the chance to become CM of the state for the third time. Hours after Yeddyurappa – a green shawl draped over his trade mark white shirt – drove to the state Secretariat Vidhana Soudha, next to the Raj Bhavan, legal eagle Ram Jethmalani  also moved the Supreme Court in his personal capacity against the decision of Karnataka governor Vajubhai Vala to invite the B JP to form the government in  Karnataka.

The JDS and the Congress legislators – who number more than the required magic figure of 112 – have been waiting for a call from the Governor. There is talk that they may be flown to a secluded location in Kerala. Senior Congress leaders also sat out in protest before a giant Gandhi statue in the Secretariat against the Karnataka Governor’s invitation to the BJP. Congress party chief Rahul Gandhi tweeted his anger at the BJP’s “irrational insistence.. and the mockery of our Constitution” and goaded his flock to wage an aggressive legal battle to overturn the “defeat of democracy”.

There were celebrations outside the Raj Bhavan but it was a muted one: folk drums were in full display even as ice cream vendors made brisk business from the milling crowd curious to watch the political drama outside the Governor’s house. The city police’s water jet van stood idle even as the swearing ceremony was over in a jiffy. Yeddyurappa had planned a massive show at the local stadium but since the party numbers have stood still at 105 – with an independent legislator’s support – the next two weeks are crucial for Team BJP to muster the additional seven seats or come up with alternate plans to show that the seven time Shimoga strongman Yeddyurappa commands the confidence of the house.

The Supreme Court has made it clear that anything can change before the final outcome of the case before it.  Anything can change for the former rice mill worker and the Lingayat strong man who built the BJP since he joined it in 1980.