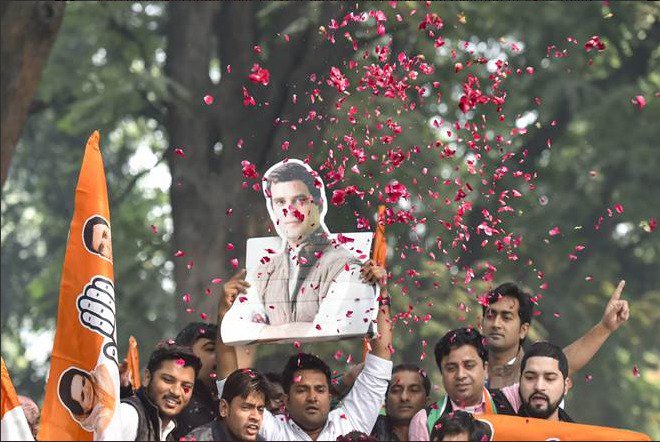 If the results that were out on Tuesday of the elections to the five state assemblies are taken a barometer for the 2019 Lok Sabha elections, the BJP-led NDA will almost surely be voted out of power by next May.

For a change, the exit polls conducted by various media outlets and poll agencies have turned out to be right with the Congress claiming Rajasthan and Chhattisgarh while just about pipping the BJP in Madhya Pradesh. Rajasthan has of course stuck to the tradition of the incumbents being shown the door every five years while in Madhya Pradesh and Chattisgarh, voters put an end to the BJP uninterrupted 15 year rule. Political pundits were near unanimous as late as two months ago that Telengana Chief Minister K Chandrashekhar Rao’s had taken a big risk by recommending dissolution of assembly far ahead of schedule and opting for early polls. But as the results have shown, the gamble has been worth it and the TRS has swept the assembly polls in the state. In Mizoram, the ruling Congress has lost power to the Mizo National Front (MNF). Mizoram was the only state in the
North-east where Congress was in power. With the loss, the Congress has lost its bastion and is not even a blip in north-eastern India.

In Madhya Pradesh, the Congress is all set to return to power 15 years after it was ousted. Out of 230 seats, the Congress was leading in 115 seats while the BJP was leading in105 seats, official data available at the time of writing. The BSP with 4 seats and SP with 2 seats and independents took the rest. Interestingly, the difference in the vote percentage polled by the two major parties is wafer thin.

In Rajasthan, the Congress is a winner hands down, having already taken 103, far ahead of the BJP with 71 while independents and smaller parties like the CPM and the Lok Tantrik Party accounted for rest. In both states though, vote percentages were very close: While the BJP got 41.3 percent of votes and yet landed up on the losing side, the Congress has secured 41.2 percent votes but got ten more seats. In Rajasthan too, the difference in vote percentage was just 0.3 per cent with the Congress getting 38.6 percent and the BJP getting 38.3 per cent of votes.

In Chattisgarh too, the Congress makes a comeback to power after fifteen years, putting an end to the long innings of Dr Raman Singh at the helm. It was a virtual sweep with the Congress nearly accounting for a two thirds majority in the 90 member assembly.

In Telengana, TRS has made a clean sweep accounting for nearly a three-fourth majority in the 119 member state assembly. The TRS is leading in 91 seats while the Congress is ahead in 17 seats. Owaisi’s AIMIM is leading in 6 seats. Both the BJP and the TDP are leading in 2 seats each.

In Mizoram, there was bad news for the Congress; the party’s last standing citadel in the north east has also crumbled with the MNF dethroning it in Mizoram.

Out of 40 seats in Mizoram, trends are available for 37 seats. MNF is leading in 22 seats while the Congress is ahead in 5 seats. The BJP is leading in 1 seat. The independent candidates are ahead in 9 seats.

It doesn’t take a political analyst to say that the results of the assembly elections will have a direct impact on the country’s political landscape ahead of the general elections. While the results are a big boost to the Grand Old Party in General and particularly to its President Rahul Gandhi, for the BJP, the clear message is that it cannot take the voters for granted for the big one that is coming up next year and bank on Prime Minister Narendra Modi to bail out the party as he has done these past few elections. 2019 is not far away but a repeat of 2014 is like a distant dream.