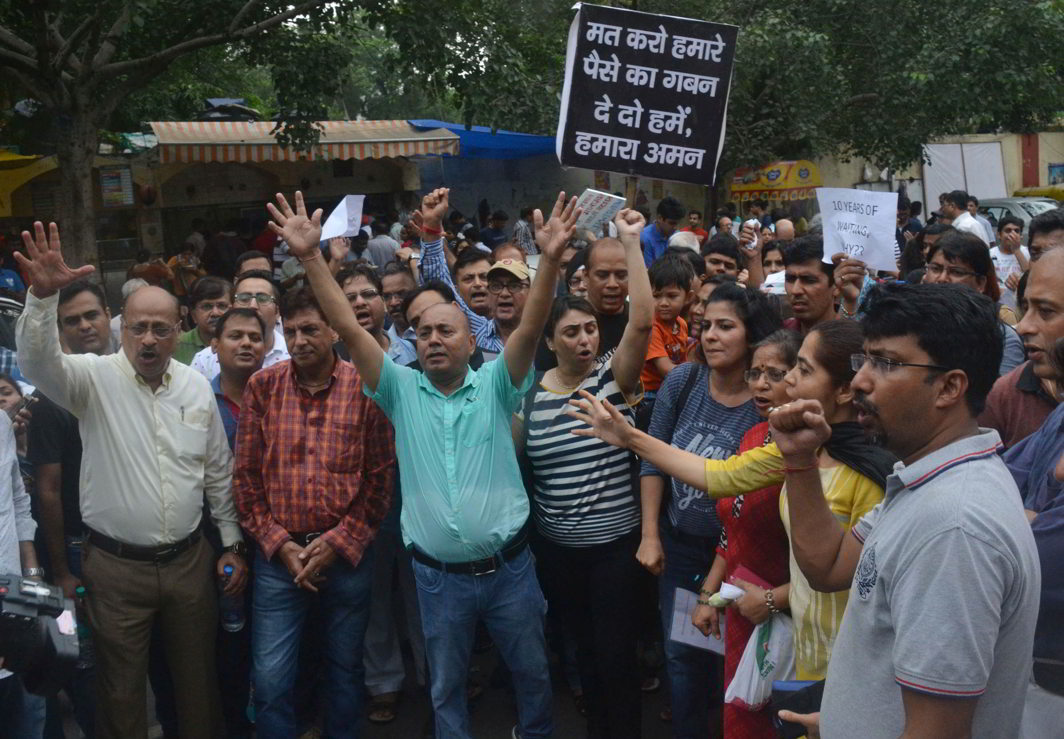 Above: Flat buyers under the banner of Jaypee Aman Owners Welfare Association shouting slogans during a demonstration demanding for a judicial probe for delay in allotment of their pre-booked flats in New (file picture).Photo: UNI

The Supreme Court bench of Chief Justice Dipak Misra and Justices A M Khanwilkar and D Y Chandrachud on Wednesday (November 22) admonished the directors of embattled real estate major Jaiprakash Associates Ltd (JAL) and told them to pay up the home buyers.

The bench, which had called all the directors in court (eight independent and five regular directors had come), said: “We don’t have any grudge against you. Homebuyers invested their
hard-earned money and savings and we will not let you play with their money.

“You sell your company, personal property or mortgage your property, whatever you do, give them their money.”

At this senior advocate Kapil Sibal, appearing for JAL, said: “We want time, as we are thinking of giving them flats. We gave 1,300 flats last month.”

However, the counsel for the homebuyers said that banks knew what condition the companies were in even after that they had granted loans.

The CJI dismissed that, saying: “We are not concerned about banks.”

Attorney General (AG) K K Venugopal requested an audit of all the accounts of the companies.

The CJI said: “Be like good children and return the money. This will be good for everyone.”

Since JAL already paid Rs 275 crores, the bench ordered the company to submit Rs 150 crores on December 11 and Rs 125 crores by the last week of December. The bench also directed that family members, directors and independent members cannot sell or transfer their personal properties, if they do so, criminal proceedings will be started against them.”

They also urged the apex court to declare home buyers as ‘secured creditors’ to help them get first right on the company’s asset in case of insolvency.

On Wednesday Sibal said: “We made the list of institutional directors and their personal properties.” Sibal also presented a draft of Rs 275 crores.

Sibal argued: “JAL is going for liquidation. If we became insolvent then we cannot pay our debts. We are not saying no.”

Thereafter the bench gave its directives. The bench also directed the NCLT to hold the proceedings against Jaypee.