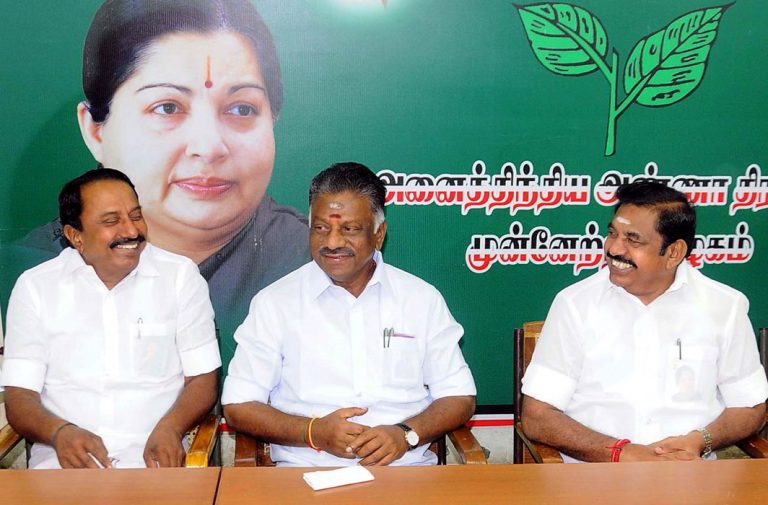 Above: Tamil Nadu Chief Minister K Palaniswami and Deputy Chief Minister O Panneerselvam, along with senior AIADMK leaders at a party meeting. The EC has ruled in the favour of the OPS-EPS faction. Photo: UNI

In another setback to jailed AIADMK leader VK Sasikala and her sidelined nephew TTV Dhinakaran, the unified AIADMK led by Chief Minister E Palaniswami and his deputy O Panneerselvam has won back the party’s “two-leaves” symbol. It is being said that the OPS-EPS led faction has been deemed as the “original AIADMK”.

The chief minister announced the Election Commission’s decision calling it good and fair. He also communicated that his faction had won the symbol based on the number of cadres and considering the MLAs and MPs on their side.

“They have given this decision based on the number of cadres, members of parliament and members of legislative assembly who are on our side,” told Palaniswami. He further added: “We submitted affidavits to prove that a majority of party cadres are with us. We are happy.”

Dhinakaran had also fought for the symbol with a claimed support of 18 lawmakers. However, the eight-month-long tussle ended as the Commission denied him the symbol saying that he “doesn’t enjoy support in the party”.

On March 22, the Commission had frozen the two-leaves symbol ahead of the RK Nagar bye-elections, which was later scrapped because of alleged attempt of voter bribery. The EC’s March order had put a ban on the use of the party’s name—All India Anna Dravida Munnetra Kazhagam and the party’s symbol.  After the freezing of the name and symbol, the party’s two factions led by Palaniswami and Panneerselvam merged. Both the factions then together filed affidavits before the Commission with the signature of the office bearers.

Dhinakaran, had asked for more time for submitting evidences of the claim, which was denied by the Commission.  The hearing of the matter concluded on November 8 and the order was reserved.

The allotment of poll symbol comes in the backdrop of the Madras High Court ruling that elections to the RK Nagar constituency, which is lying vacant since late party chief J Jayalalithaa’s death, must be conducted before the end of the year.