A letter has now been sent to Prime Minister Narendra Modi by three TMC MPs – Derek O'Brien, Sukhendu Sekhar Roy and Mahua Moitra – demanding that Solicitor General Tushar Mehta be removed from his post over his alleged meeting with BJP MLA Subhendu Adhikari. 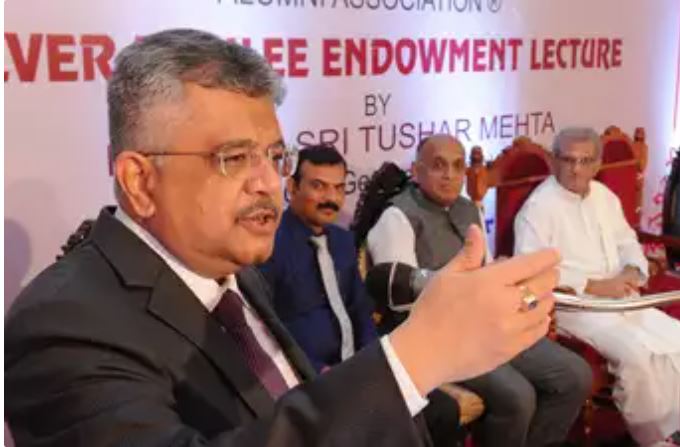 The Trinamool Congress has sharpened and broadened its attacks on the Bharatiya Janata Party even as the BJP has been doing the same against the TMC.

A letter has now been sent to Prime Minister Narendra Modi by three TMC MPs – Derek O’Brien, Sukhendu Sekhar Roy and Mahua Moitra – demanding that Solicitor General Tushar Mehta be removed from his post over his alleged meeting with BJP MLA Subhendu Adhikari, who is an accused in the Saradha chit fund and Narada sting cases.

Mehta appears for the CBI in these cases where the CBI is the principal probe agency. Mehta later denied the allegations, saying that while Adhikari did come to his house, no meeting took place.

The letter obviously points out a clear conflict of interest. The letter, written on behalf of the All India Trinamool Congress (AITC), informs that “recently, various news reports containing videos have been circulated from which we have been made aware that Suvendu (sic) Adhikari, an accused in various offences being investigated by CBI and ED and a politician belonging to the Bharatiya Janata Party, had meetings with Tushar Mehta.”

The letter says that the meeting happened at the residence of the Solicitor General of India. Tweets have also been circulated on social media by prominent personalities questioning such a meeting between Adhikari and Mehta, which, curiously took place subsequent to a meeting of Adhikary with Home Minister Amit Shah.

“Two such matters are the:

“1. Narada Case, being investigated by the CBI and ED where Suvendu Adhikari was seen taking bribes in a sting operation and were publicly circulated by the BJP. Tushar Mehta, Solicitor General of India, is representing the CBI in the Narada case before Supreme Court and High Court.

“2. Saradha Chit Fund Case, being investigated by the CB and ED where Sudipta Sen the prime accused, had written multiple letters levying grave allegations against Suvendu Adhikari. Tushar Mehta, Solicitor General of India, has advised and appeared for the CBI in the case also,” the letter adds.

“When my meeting was over, my PPS informed me about his arrival. I requested my PPS to convey Adhikari my inability to meet him & apologise as he had to wait. Adhikari left without insisting to meet me. The question of my meeting with Adhikari, therefore, did not arise.”

Did you find apk for android? You can find new Free Android Games and apps.
Share
Facebook
Twitter
Pinterest
WhatsApp
Previous articleAdoptions laws: No stake holder should be given an absolute free hand
Next articleLakshadweep in the eye of the storm